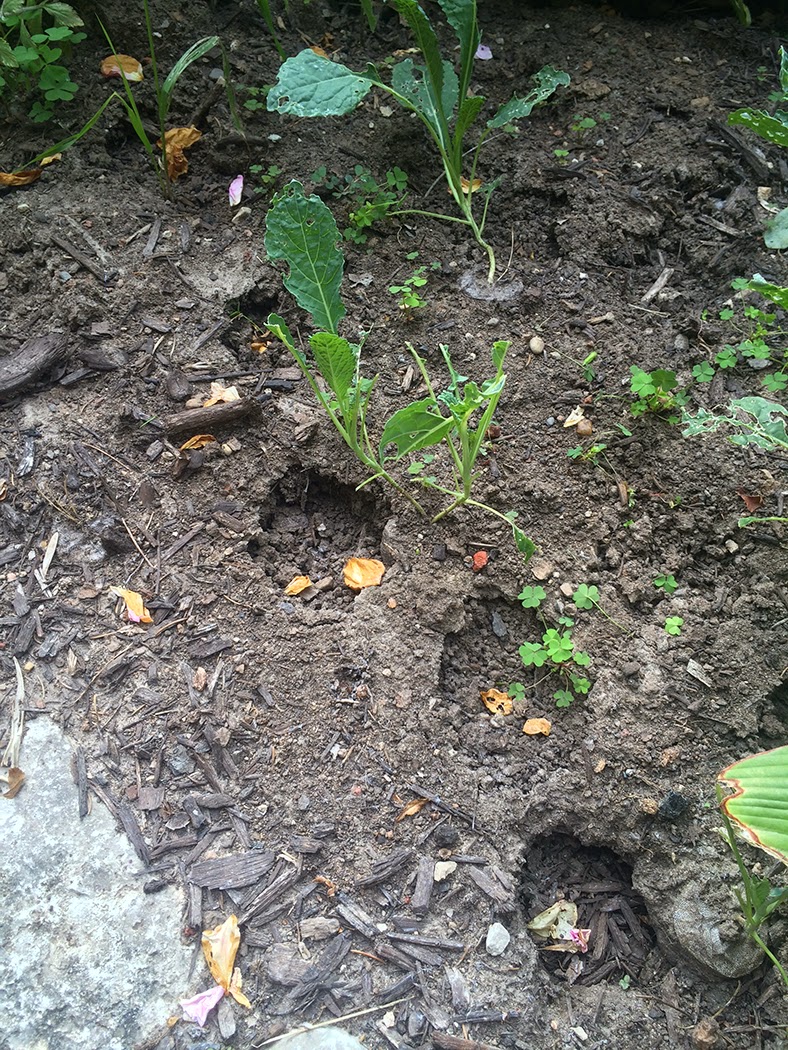 One of my favorite things to do on a warm summer morning is take my cup of coffee and stroll around the garden. Most of the time I end up with dirty fingernails and a half hour late for work after I start pulling random weeds or deadheading spent blooms.

But lately my walks have been anything but a relaxing start to the day. Instead of admiring the morning dew on flowers, or picking an errant weed, I end up surveying the damage. And it is plentiful.

The deer population here has apparently flourished and from what I can tell, a good number of them are hanging out in my yard every night. Living a quarter mile from a state park, deer are a fact of life here. But until last winter, I was able to manage their impact in the yard with a little bit of smart planting and a variety of deer repellant methods. When we sustained horrible deer damage last winter, I wrote it off as a side effect of a winter with snow that never melted an a lack of food for the herd. The problem is, the damage never stopped.

You would be hard pressed to find an intact hosta in my yard. The few that the deer are not interested in appear to be very tasty to slugs. The hydrangeas are under constant assault. The sedums have been sheared off so many times I’ve lost count. Lily buds are nipped off every night. Roses are reduced to nibs. Even nasturtiums are sampled.

The options for deterring deer are not many. There are a ton things that are said to work, and most do for a short time. Human hair (never tried), Irish Spring soap (didn’t work), blood meal (didn’t work), Milorganite (repels humans too), predator urine (gross, stinky and doesn’t really work), commercial spray deterrents (work for about a week), garlic spray/capsules (the deer laugh), big dogs (the deer laugh harder).

The one thing I’ve found to work a little bit (and I actually found a study to support this) is an egg-based spray. Here’s the recipe I use.

So almost every night, I go outside sprinkling this stuff on my plants. I pretty much always get some on myself (yuck) and if it rains at all, it’s gone. Any plant that I miss is fair game.

It’s clear there is only one way to stop this from happening. The only truly effective way to keep deer from eating your garden is to keep them out of it all together. In other words: a fence.

I’m not alone in my quest to have a garden that is not eaten by deer. Margaret Roach tried it all before she put up a fence.

I bristle at the thought of a fence and can think of many reasons why I don’t want one: they are expensive, they can be ugly, they are a pain to mow around and keep looking nice, they require something (a gate, most likely) at the end of the driveway and, for me the worst bit of all, they send a message to your neighbors that can be perceived as unfriendly. I love our neighborhood full of eclectic folks, where many of us have large properties but there is always a friendly wave or a chat to be had on a walk down our shared road. Fences have no part in that, in my mind.

In fact, our very loose homeowners association once had some rules about fences, although now that I’ve lived here long enough I seriously question whether anyone would actually say something if you put one up. I do know that when we considered it several years ago, our next door neighbor begged us not to put up a fence. And I completely understood his position.

From the research I’ve done on deer fencing so far, there are two options that seem to work. You can either go tall—at least 7 feet and some places say 8 feet—or you can go wide. Two 4-foot-tall fences 5-feet apart are said to work because deer won’t jump into an enclosed space and they can’t jump high and long. The tall version is most certainly more economical because you can use sturdy plastic mesh fencing, although apparently it works best when you run a tension wire through the middle of it because otherwise deer will lean on it until it gives.

A pair of shorter fences would certainly be more attractive, but the cost to build a nice looking fence could be astronomical. And I keep thinking about what you’re supposed to do with the area between the two fences (I have visions of weeds taking over). If we lived on a truly large property, the double fence idea would be great. You could put up a pretty simple cattle-type fence, mow a path through the middle and call it a running track.

Our property is large enough that any fence is going to be a considerable expense but small enough that we’re going to see the entire fence from the house. And I’m completely opposed to the idea of fencing only a portion of the property. To me, that’s like giving away some of the land we own. We also have a creek to contend with (and I have no idea how you deal with fencing that). (You can see an illustration of our property here to get a better feel for the area).

Here is a good looking short fence with extending wires to get the height needed to keep deer out.

My initial thoughts on a deer fence are that we could do the short, double fence approach on the western edge of the property over by the vegetable gardens. It’s a tight squeeze there because we also use that lawn by the road as overflow parking for guests and as a passing lane on our one-car-at-a-time road, but at least it would look nice and hopefully not be too offputting when driving by.

We might be able to turn the corners and extend that type of fencing situation a bit to the east on either side, simply for aesthetic purposes, and I’d do some kind of pretty design to the fence, at least the one closest to the road. The rest of it would have to be the tall mesh variety of fencing, although we could probably do shorter mesh by the cedar trees lining the driveway because the tall mesh would extend into the branches.

The driveway is a huge issue. We would never do any kind of manually opening gate  because it would never be closed. An electric gate sounds expensive, prone to breakage and ugly. The best solution would have been one that I should have thought of a few months ago, before we paved our driveway. Cattle crates (those metal bars that run across the ground) work on deer too, and so long as you put in a big enough area of them across the width of a driveway, they won’t walk across them. But who wants to rip up 7 or 8 feet of brand new driveway for that?

Right now I’m looking for a local fencing company that specializes in deer fencing, but I’ve had no luck. There are lots of places that sell kits for the mesh-style fence, and that may be something we could do ourselves, but what I really need first is some hands-on advice and an accurate idea of what kind of money we might be talking about.

I still cringe at the thought of a fence around the yard, but then I dream of a garden that is intact and one that I don’t have to spend hours each week trying to protect from the herd. I have tried to live at peace with these beautiful creatures but I don’t think I can do it any longer.

I’d love to hear any suggestions, experiences or other information you might have about deer fences, fences in general or some magic bullet I’m missing in keeping the deer out of my yard.

deer fence hostas
by Erin @ The Impatient Gardener
8 Comments
previous post: GET OUT OF YOUR GARDEN (AND INTO SOMEONE ELSE’S)
next post: CHALLENGE ACCEPTED (aka CAN I BRING FREE PLANTS BACK TO LIFE?)