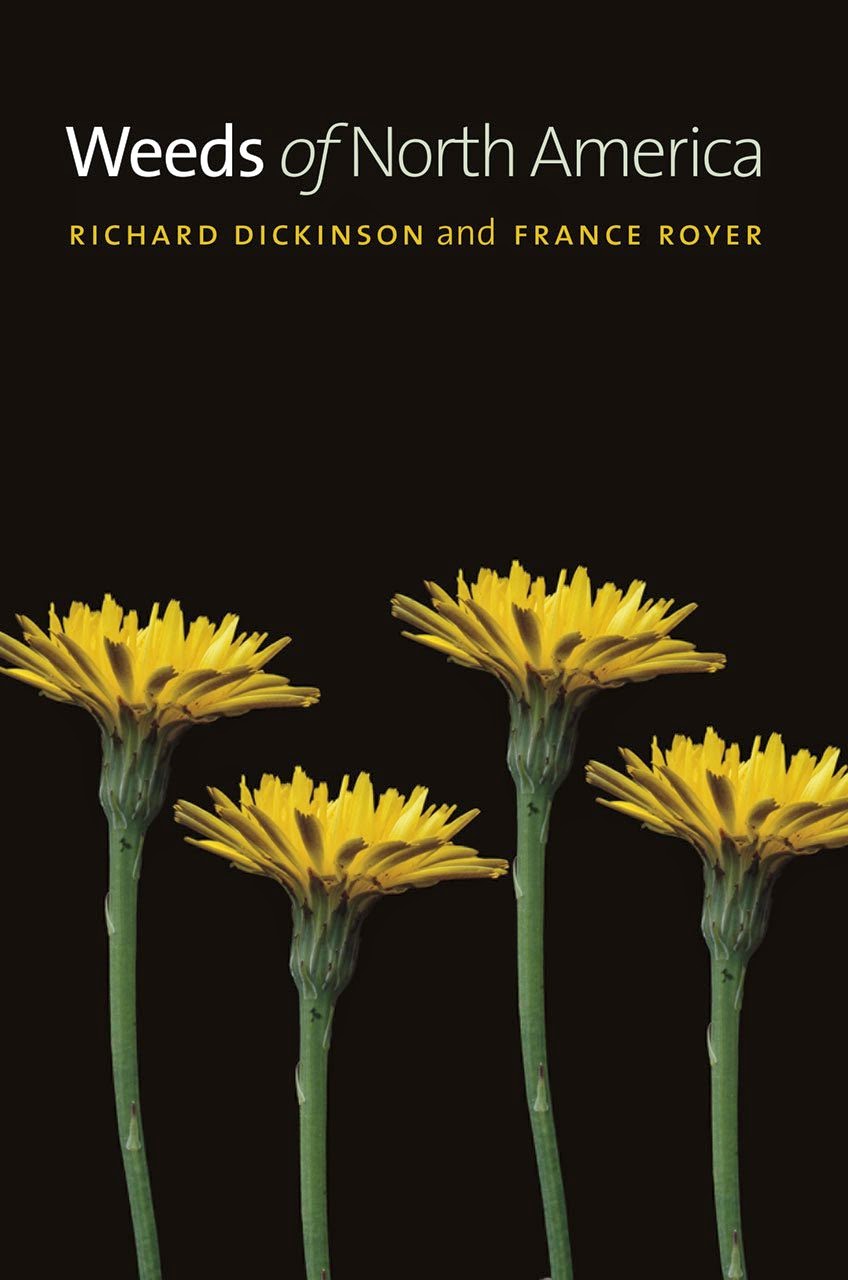 Not too long ago I offered absolution of garden shopping sins and many of you took me up on that offer (don’t worry, I’m an ordained minister of the Internet Church of the Garden so I’m entirely qualified to offer such absolution). I felt so much better about it that I ordered 40 willow rods the other day, and I only feel a little guilty about it. (It’s Margaret Roach’s fault.)

Recently a book showed up in my mailbox for review called Weeds of North America ($35, University of Chicago Press). Sounds like it would be good for insomniacs, right? I think perhaps it shows what a garden geek I’ve become that I am ridiculously excited about this book and know that it will be at the top of the garden book rack forever.

This isn’t going to be one of those books that you pick up in the middle of winter for a jolt of inspiration. It’s going to be a book whose pages are dog-eared and muddied, signs of being flipped through with hands straight from the garden, as I try to identify the latest unwelcome intruder in my garden.

But before I get into the book, I need to make another confession. I have done something horrible with a weed.

When I started gardening at our cottage about 12 years ago (it will be 13 years in June that we’ve owned the house but I didn’t do any real gardening the first year), I was a novice gardener. I was also a poor gardener as we had tied up just about every penny we had in the house. I had big ideas and no budget so I was thrilled with whatever flowers I could find existing in the garden or free from friends and family.

What is now the circle garden was once a vegetable patch and when I started gardening there it was filled with a random assortment of weeds and shrubs that seemed to have been stuck in with little thought as to design.

One of the flowers that was blooming there was a delightful lavender number with cup-shaped flowers extending up a stem. It practically oozed cottage charm.

In one of our frequent walks around the yard, my mom said, “You know that’s a weed, right?”

Although I was a decade removed from being a teenager, I gave a reply that could have come from any sassy 14-year-old’s mouth.

And my mom, who had been down this road with me on more than one occasion replied, “You’ll be sorry.”

Gardeners, listen to your mothers! 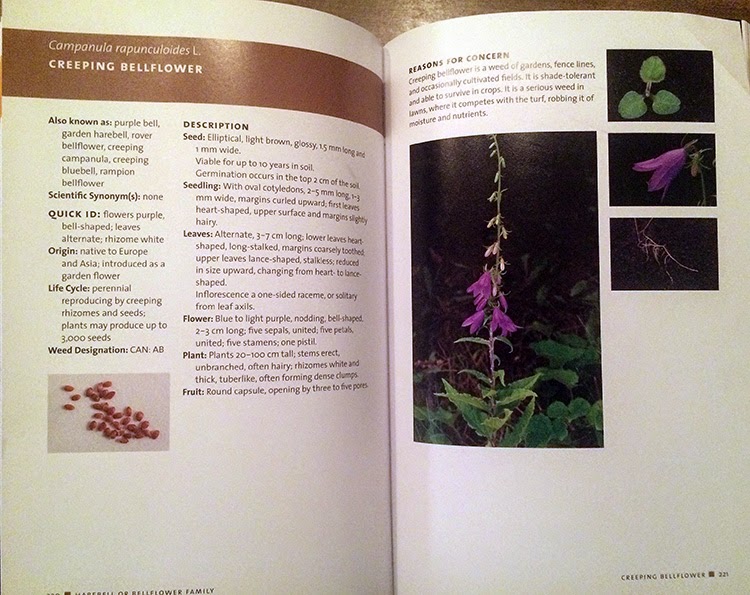 Creeping bellflower is a weed of gardens, fence lines and occasionally cultivated fields. It is shade tolerant and able to survive in crops. It is a serious weed in lawns, where it competes with the turf, robbing it of moisture and nutrients.


Life cycle: Perennial reproducing by creeping rhizomes and seeds; plants may produce up to 3,000 seeds.

In other words, I’m screwed. I have tried to rid my garden of this plant. I even dug up an entire section of the circle garden a couple years ago in an attempt to dig it all up. It came back. I haven’t allowed it to flower for several years now, but the rhizomes all but ensure that it will always be there.

It would be one thing if I alone was made to pay the price for my gardening ego that allowed me to think for one second that I knew better than my mother, an experienced gardener. But my sins go much further.

Since there were several plants sort of plunked in that area when we got the house, most of those were rehomed. And it also served as a holding bed for awhile, so while I was renovating other parts of the garden, I would stick plants there while I decided what their future was. I moved several ornamental grasses there when we ripped out the enormous bed of them off the patio. And then I decided I didn’t have a need for all those grasses and I did what gardeners do: I shared them.

Some of them went to my mom. Others went to an ornamental garden in the middle of downtown that is maintained by volunteers, one of whom is my mom.

You can see where this is going, right? Creeping bellflower is starting to pop up in new places, namely the places where I so generously donated those ornamental grasses. I have infected other gardens and I feel horrible about it.

Had Weeds of North America been around 12 years ago, that probably wouldn’t have happened. I could have looked it up and I would have known to get it out of my garden immediately instead of letting it flower (and therefore seed) all over the place. 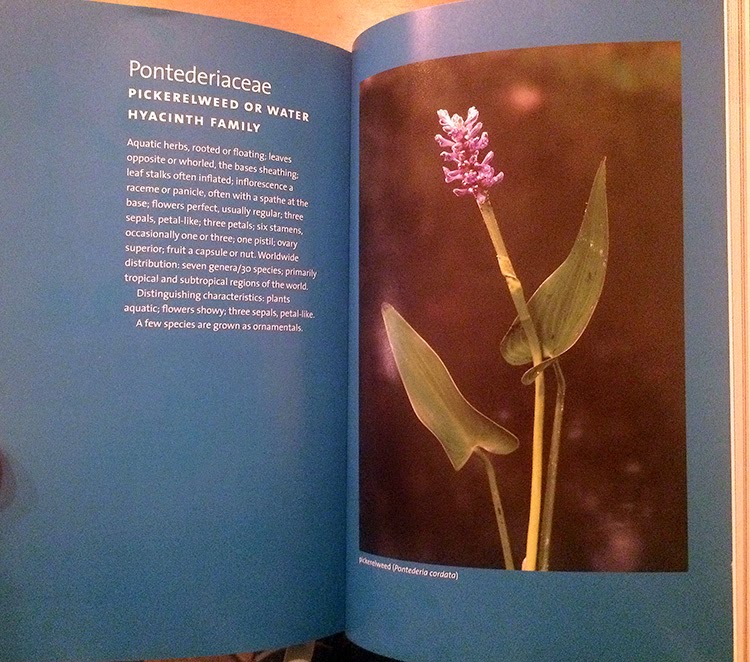 Although it may be a book with a title that could probably become a joke on a late-night talk show (by the way, I don’t fault the title; I like a reference book that says what it is outright), it is filled with beautiful photos by France Royer. Yes, weeds can be beautiful, especially when they are safely captured in the pages of a book much like Hans Solo frozen in carbonite. The writers did an excellent job of sticking to the main facts. Being concise is important in this book because, let’s be honest, there are a lot of weeds to cover.

And that—the sheer number of weeds to be covered—is this book’s biggest challenge. How do you begin to organize them all? Authors Richard Dickinson and Royer have done a yoeman’s job, organizing them by leaf arrangement and flower color, but it can still be a little challenging to find what you’re looking for. Fortunately the attractive layout and excellent photos make flipping through this book enjoyable.

There is no mention of how to rid yourself of the weed once you identify it. But then again, I also understand this: that’s not the book’s purpose. Also, I suspect the book’s authors would be unwilling to wade into a controversial stance on when to use chemical solutions and when not to.

I’ve been waiting for this book.