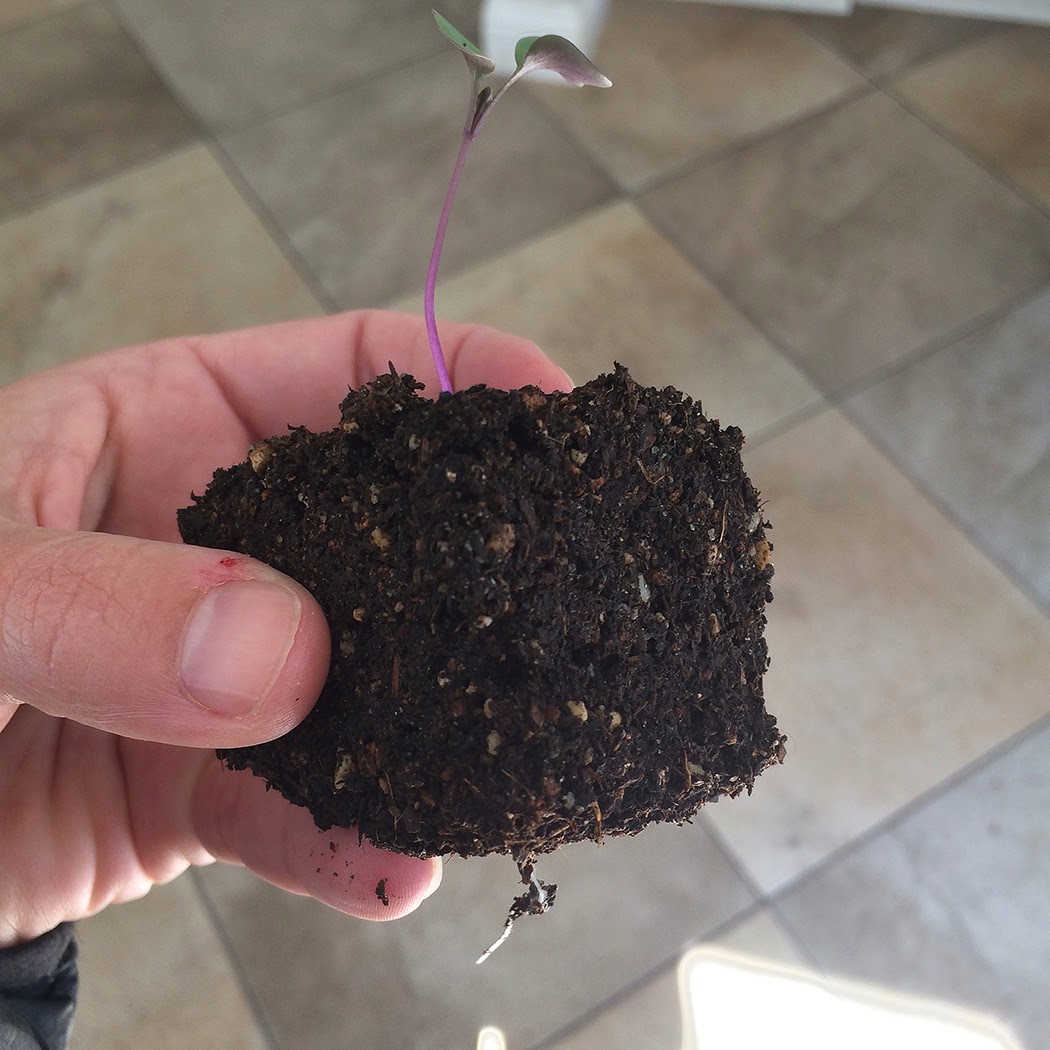 Now THAT was a weekend. Temperatures here nudged up to 40 this weekend, birds were singing, the sun had warmth and I got a few more garden chores taken care of.

I got the last Limelight hydrangea pruned and it feels good to have that job finished. I also covered up the raised vegetable beds and the compost pile with black plastic in hopes of heating things up a little quicker (there is still a layer of snow on them). These are all small things but on those first warm days it feels wonderful to just be outside.

We even brought up a couple of chairs and basked in the sun on the deck for awhile. It was divine.

I’m thrilled to report that inside seed starting is officially underway.

I started a flat of Redbor kale, which I grow more as an ornamental than an edible (I prefer Lacinato kale for eating). I think kale does better when you direct sow it, but I’d like to have some established plants for growing as ornamentals so I’m hoping these will be a good size by the time I plant them out.

I’m growing a lot of things in soil blocks this year for the first time. I’m just experimenting with them right now, but once I get a better feel for them, I’ll do a post about how to use them. One of the interesting things about them is that it’s much easier to see what your seeds are doing. For instance, I was shocked at how quickly roots were coming out of the bottom of the block even with a small amount of top growth. Gives you perspective on how much is going on that you never see.

I also have a flat of chives under the grow light. I want to finish the chive hedge on the circle garden this year and between these new plants and being able to take divisions of what is there, I think I should be able to make it all the way around.

Gigante parsley, which is notoriously slow to germinate, is on the heat mat in the basement, but I don’t expect to see anything popping up for a couple weeks.

The sweet pea trial had an interesting outcome. Sort of. To refresh your memory, I took three seeds of two varieties of sweet peas: a Spencer variety for cutting—Lake Windermere—and an heirloom variety grown mostly for its scent—Fire and Ice. For each variety, I soaked one seed for 22 hours, nicked one seed and left one seed alone. Then I planted them in 4-inch pots (three per pot), heated them to between 60 and 65 degrees and watched for germination.

From there, Fire and Ice took off and Lake Windermere was stuck in time. The one seed that had germinated wasn’t exactly thriving and the other two never germinated. Upon a close inspection, I found something crawling in the Lake Windermere pot and I’m pretty sure it was some kind of fungus gnat because the soil was too wet. That’s the danger of using a larger pot with seeds … it’s very easy to make them too wet.

Because of that, I don’t think this was really a fair trial, although I think the fact that the untouched seeds were the first to germinate in both pots suggests that you probably can’t go wrong, no matter which way you choose to treat your sweet pea seeds.

I did sow another pot of Lake Windermere, so it will be interesting to see what happens with that.

The “real” sweet peas as well as Verbena bonariensis and several other things are scheduled to be planted next weekend. Good thing I ordered a bigger grow light!