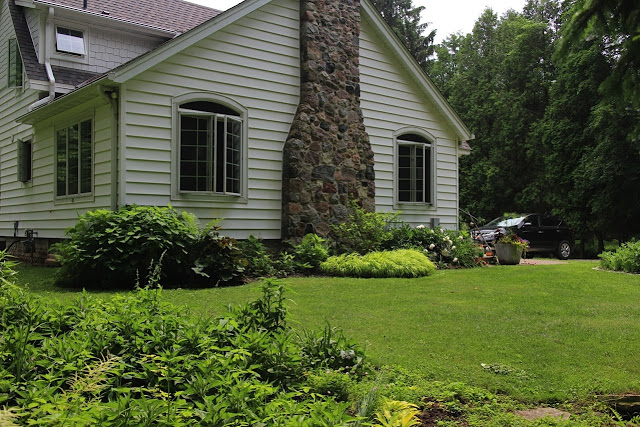 Big things happen in my garden when I’m not able to garden. It is absolutely a case of my gardening eyes being much larger than my gardening stomach, but what else is a gardener to do during the long days of winter than think about the garden?
This spot along the west side of the house has been problematic over the years. First I grew a very questionably hardy Japanese maple there (it died; I was sad). Then I planted a rather ordinary witch hazel there as the focal point. Unfortunately I was at the mercy of local nurseries, which seem to stock the most plain-Jane cultivars they can find, and ended up with a not-so-special plant. The best that area has looked was in the early days of the planting there. The witch hazel was small but lush, in front of it were black Heucheras and on the edge was a swatch of Hakonechloa ‘All Gold’.

But the Hakonechloa happily took off and the Heuchera, which is not long lived in my garden to begin with, suffered. It’s still there, it’s just much shorter than the Hakonechloa, so you can’t even see it. I divided all that Hakonechloa three years ago to make the new garden by the garage and I’ll be able to divide it again for the new circle garden this year. Despite being considered a shade plant, it thrives in that spot with just a big of fading late in the summer. It’s an all-star in my garden, seemingly accommodating a variety of light conditions.

Clearly this spot is in need of a bit of a redo. The good news is that because of the large spruce we cut down on the south side of the driveway there will be more light on this side of the house. Also, it’s really more of a west southwest exposure, so there is light there by late morning. You can get a feel for the layout of the garden—this space is labeled as the “West side garden”—in the slightly outdated “artist’s rendering” of the garden that I did a few years ago, below. 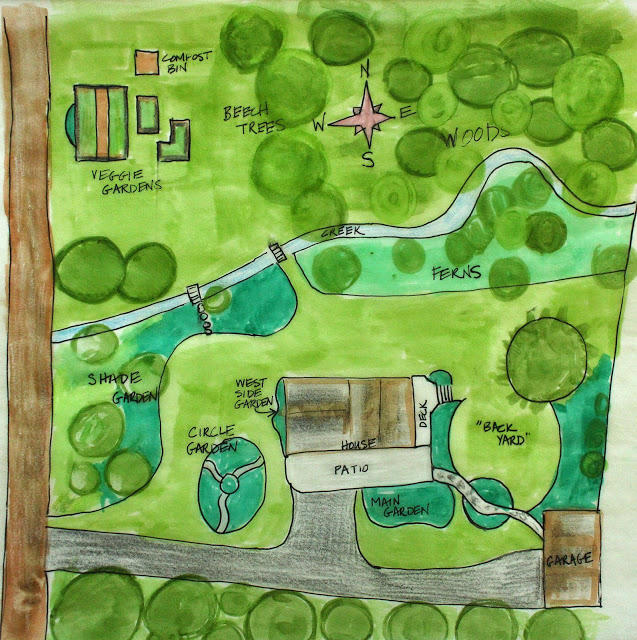 The most important part of that planting, and frankly, perhaps one of the most important parts of the entire garden as it is visible as you drive in, is the focal point plant in front of the chimney. In my opinion, it needs to be highly structured and a little simple so as to not compete with the busy pattern of the stone. I’ve been wary of dark foliage because I want it to stand out against the dark of the chimney.
A month or ago I took Margaret Roach’s 365-day garden webinar. It was very good and full of valuable information but the only thing I can tell you about it right now is that Margaret has an Asian pear espalier on the side of her house and I’m in love. I would love to link you to a picture of it but I can’t find one that links back to Margaret’s page, so you’ll have to trust me that it’s fabulous. I’ve been obsessed with the idea of doing an espalier tree in front of the chimney ever since and that led to a ferocious amount of calling around to local nurseries.
The good news is that I found one not far away and they claim to be reserving it for me (I always wonder if nurseries are really saving plants though as they never take a deposit and it all seems very casual). Supporting it will requiring putting bolts and wires in the stone or mortar. Obviously a full southern exposure would be best, so fruiting may be slightly compromised but that’s OK. I’m frankly more worried about aesthetics than production and would have been equally happy with a non-fruiting espalier if one were able to be located.
I will leave the Hakonechloa after dividing in hopes that it can handle the increased amount of sun, but the Heuchera will be replaced. With what, I don’t know. But it feels good to go in to gardening season with a plan.
chimney espalier garden hakonechloa tree
by Erin @ The Impatient Gardener
3 Comments
previous post: THIS YEAR’S MASTER SEED LIST
next post: WEEKEND FINDS