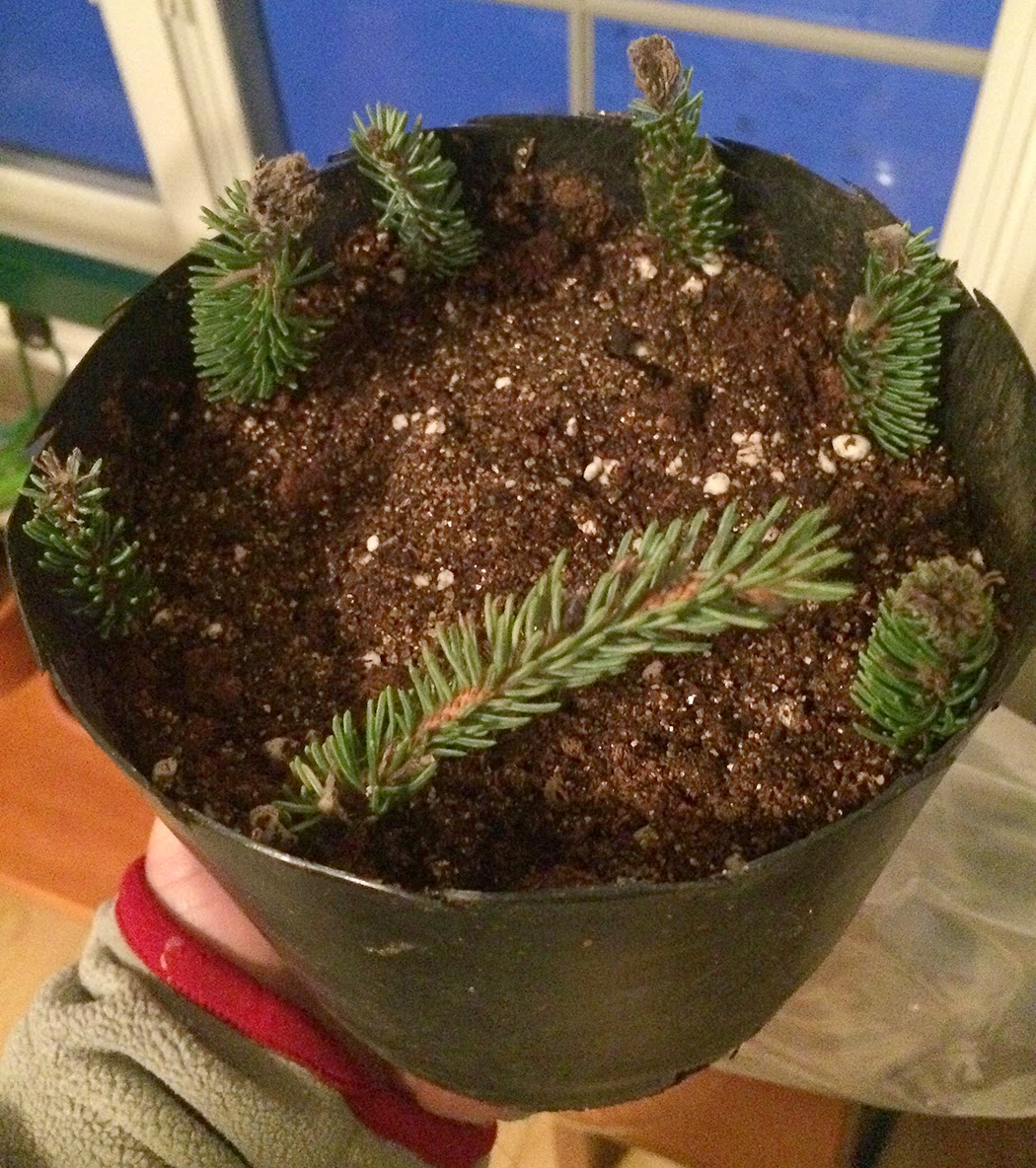 I have a few horticultural experiments going on in my house right now. This is unusual for me because I rarely have the patience for such things, but this time of year calls for finding new things to amuse ones self.

About six weeks ago, maybe a little less, I took cuttings from the new white spruce (Picea glauca ‘Hudsonii’) we planted last year. So far it’s been a lovely little tree and one I wouldn’t mind having a few more of. It’s the first time I’ve tried to propagate an evergreen and from what I’ve read, it will take up to 13 weeks for the cuttings to root, so I’ve not even tried to check on them yet. The good news is that they appear to still be alive in their little mini greenhouse (i.e. a plastic bag over the pot).

If it works, I’ll be sure to tell you what I did, but I don’t want to share a method that is a failure if it doesn’t work.

The other experiment going has to do with sweet peas. According to my little seed chart, sweet peas are not scheduled to be sown until March 15 at the earliest in my area, but I want to do everything I can to make sure that they are successful.

There is some debate as to how to start sweet peas. OK, there is a lot of debate involving everything from timing to the type of pots you should start them in to what to do with the seeds before you sow them. The last bit is what my mini experiment focuses on.

Some people say to soak the seeds. Other suggest nicking them. And several of the British gardening television presenters suggest doing absolutely nothing to them other than sticking them in the soil.

Blog reader Casa Mariposa reminded me to soak the seeds overnight and said hers sprouted in just a couple days by doing that. The growing instructions that came with my Owl’s Acres Sweet Peas order (yeah, I’m the freak who orders seeds from England the first time I try to grow sweet peas) strongly suggest nicking or soaking, going so far as to say they don’t recommend even trying them without doing one or the other.

Since I ordered too many seeds (I’ll probably end up giving away whatever I don’t use, so stay tuned if you’re interested in that sort of thing), I’m starting six of them early. I took three of a Spencer variety (long-stemmed, meant for showing and bouquets) called ‘Lake Windemere’ and three of grandiflora ‘Fire and Ice’ and potted them up, one pot per variety (which is how I intend to sow them in March). For each variety, I nicked one seed, soaked another for 22 hours and did nothing to the third seed.

The two pots are currently on the seed-starting mat (set to about 60 degrees but it’s having a hard time getting to that temp for some reason, maybe because the pots are somewhat large) and I’ll be keeping an eye on what happens.

Of course I’ll report the results to you when I have some, which maybe be in a few weeks because it can take some time for sweet peas to germinate.