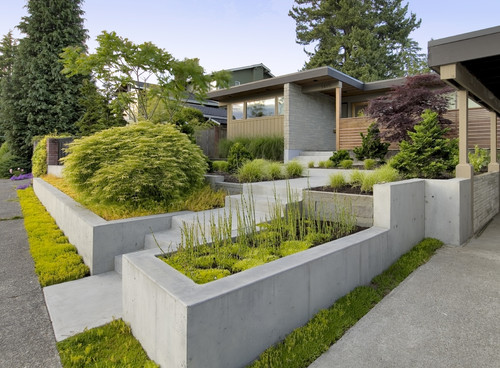 I got my latest issue of Gardens Illustrated magazine the other day. I say “my” latest issue, because this British pub take a long time to get to a mailbox in the U.S. and I believe the next issue is already out in England. I put up with that because it’s a fantastic magazine, one that has earned shelf space next to my collection of Fine Gardening magazines.

After giving it a once-over (that’s how I read magazines: zip through them and then go back and actually read them), I read Frank Ronan’s column. Unfortunately it was not on the website so I can’t link to it, but it was all about disregarding the style of your house when designing a garden. The subhead was, “Planting your garden to conform to the period of your house is ridiculous, says Frank.”

According to Ronan: “The house is a fixture, and I agree that if you extend the original architecture should be respected. But the garden around it is a fluid thing, which cannot stand still for a day, let alone the aeon that a solid house should last. To make the garden conform to the architecture is as ridiculous as dressing in the clothes of the period, and as pretentious.”

I’ll be honest: I have always tied garden design to a house’s architecture in some way. I have a hard time envisioning my house with anything other than a cottage-style garden. In no way can I imagine a walled English garden at my parents’ mid-century modern house.

At the same time, I’ve long preached that you don’t have to follow the rules in your garden. It’s yours; do what you want. Maybe that means I fall somewhere in the middle on this. Still, it seems to me that some houses are MADE for a specific kind of garden.

Would this work outside any other style of house?

Contemporary Exterior by Seattle Architects & Building Designers SHKS Architects
I tried very hard to find photos of gardens that don’t match their houses but it was very difficult (note: This is different from gardens that have no style whatsoever; those don’t count for the purposes of this discussion). Maybe this says more about Ronan’s point; that it really doesn’t matter.

What kind of house would you expect to see attached to this garden?

Traditional Landscape by Chicago Landscape Architects & Landscape Designers Milieu Design
Did you think it would look like this?

Traditional Landscape by Chicago Landscape Architects & Landscape Designers Milieu Design
This garden is interesting to me. It’s certainly very symmetrical which lends itself to a formal style.

Traditional Landscape by Far Hills Landscape Architects & Landscape Designers Deborah Cerbone Associates, Inc.
And yet when you see a broader view of the house, I think a more free-flowing style garden would be equally nice. Clearly this kind of thing is what the owners were after.

Traditional Landscape by Far Hills Landscape Architects & Landscape Designers Deborah Cerbone Associates, Inc.
What do you think? Do gardens need to match the style of the house?
house
by Erin @ The Impatient Gardener
4 Comments
previous post: KICKSTARTING A PROJECT THAT’S BEEN A LONG TIME COMING
next post: FRIDAY FINDS