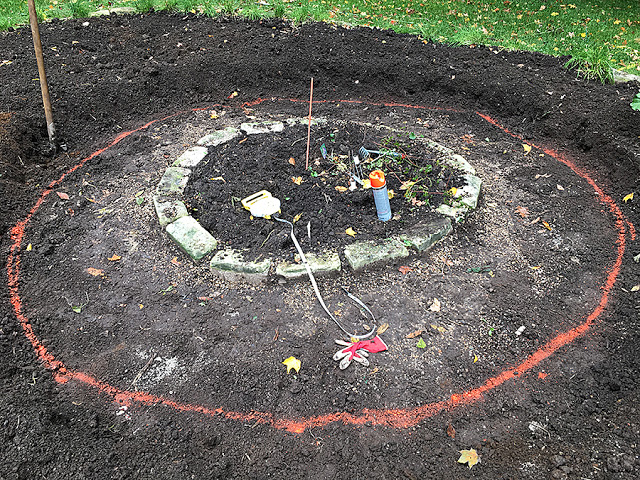 Progress continues on the renovation of the oval circle garden but I won’t lie, I’m getting nervous about how slowly it’s going. I spent a good part of last weekend working on it and have gotten it to the point where I’m waiting for materials before I can move on. My goal is to have all of the hardscaping finished before the snow flies so I’m feeling better about reaching that now.
When we last checked in on what was happening, we had spent a ton of time marking everything out. I’ll just tell you again, my advice is to not make an oval anything. Circles are easy: Stick a stake in the center and run a measuring tape from there. But ovals, especially this one, which is not perfect, is much more difficult to get everything even. And since this is meant to be a very symmetrical design, that’s an issue. My hope is that it will be close enough that no one will notice a few math errors here and there.
Since we marked everything, I’ve been painstakingly forking over the whole thing. I had previously moved out all the plants except for a few in the center, and relocated a bunch of the chives for the hedge to a section. Once that was finished I attempted to get rid of every weed root I could. A few years ago I battled a particularly nasty weed called Campanula rapunculoides, aka creeping bellflower.  It was particularly bad in one section of the garden so I pulled out all the plants and brushed Roundup on every little leaf of it, repeated the process a week or so later, then waited several weeks before replanting. It worked quite well, but there are a few little spots where it still pops up. It was the first time I’d ever used a herbicide in any part of my garden, but desperate times call for desperate measures.
The other weed—and I’m prepared to take some heat for using that term—that is problematic there is lily of the valley. It came with the garden and I sort of liked it. In fact I quite like lily of the valley in the right place and in small quantities. But the nature of lily of the valley is that where it is happy, there will be more. And it is happy in a lot of places.
I pulled out lily of the valley roots by the wheelbarrow full. No lie. I knew it was rampant there, but I had no idea it was that bad. I’m certain I didn’t get it all and the fight will continue.
As I grumbled about the stupid weed situation, I made two interesting observations. The first was the health of the soil in that garden. It is a lovely texture: not too sandy (a concern here), not full of clay (believe it or not, also a concern, from where soil had been brought in over the years, and full of worms (I take large quantities of worms in my garden as Mother Nature’s atta-girl). I worked on the soil in that garden over the years, adding compost, mulching and, frankly, not doing much else, which in my opinion is better than a lot of disturbance. The other thing I noticed was that all that forking over was creating a lot of very fluffy soil.
With that rather laborious, not to mention boring, process finished, I started digging the new paths. As you might imagine, this displaced a significant amount of soil in the process as well. By the time I was finished it looked like a backhoe had been busy. I know a lot of soil will natural compress in time, but some of it has to go, so now the next step will be to do a bit of soil relocation. That’s no problem here: there is always an area that needs a little soil.
There is a small amount of digging left to do. The area around the inner circle, needs to be dug down a bit more. Unfortunately it is very compacted there from the path that had been there and I just didn’t have it in me to tackle that.
The next step will be to install metal edging along the paths, then replace the cobblestones along the inside edge of each segment. After that it’s time for paver base and gravel. Like I said, the clock is ticking.
Two parting notes: 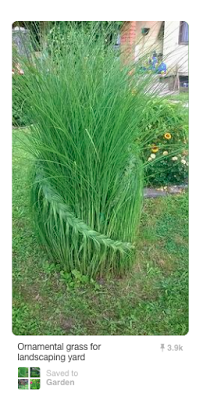 So of course I went out and tried to French braid some grass. I’m not sure if what I did counts as a Pinterest fail, but let’s just say the effect is somewhat different. In my defense, the picture is of a nice green Miscanthus and my Korean feather reed grass is getting pretty crispy. I will say, though, that the alternative was just cutting it off because it was flopping everywhere and irritating me, so at least now it’s reined in a bit. 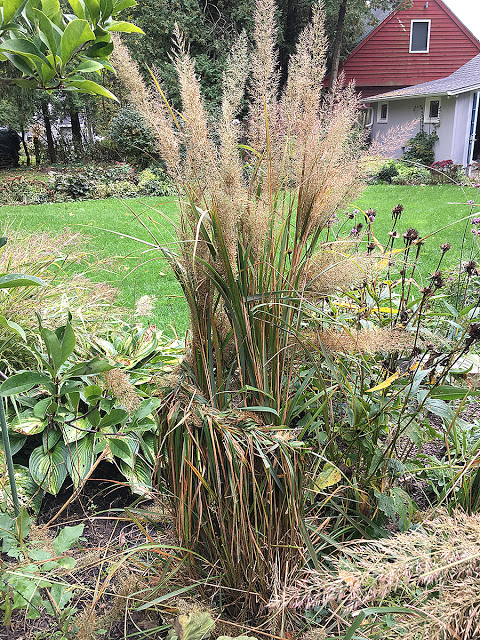 circle garden oval soil
by Erin @ The Impatient Gardener
4 Comments
previous post: THE ALMIGHTY ALLIUM + A GIVEAWAY
next post: THE PATH-MAKING MISTAKES I MADE THAT YOU SHOULDN’T