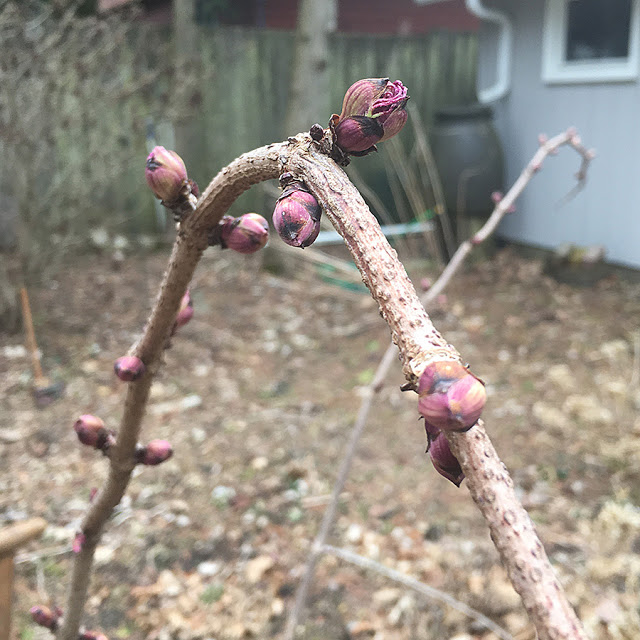 Given that I delayed a lot of garden work in fall, it’s no surprise that the first real job I did in the garden this spring was a task I should have taken care of several months ago. And it was that much more painful for having waited.

Last September I shared the sad news that one of my favorite plants had been hit with a nasty disease: verticillium wilt. I watched as my Lemony Lace elderberry (Sambucus racemes) wilted one chunk at a time, and just when it was finally getting to a good size after three years in the ground.

Verticillium wilt is a nasty soilborne disease that affects many plants (here’s a list), including elderberries. Last year I cut off the affected branches, making sure to disinfect my pruners) but I knew when I did it that wouldn’t solve the problem. The only real remedy for dealing with it is to dig out the plant and a large area of soil around it.

Taking that step last weekend was even more difficult because there were lovely fat buds on the branches that I knew would turn into gorgeous feathery leaves. And they would look good for a little bit but it’s likely that they too could succumb to the disease. Or maybe not. According to the Missouri Botanical Garden, the symptoms might not show up this year: “The initial symptoms may occur on only one branch or may involve the entire plant. Oddly, following the initial symptoms, there may be no sign of the disease for several years even though the infection continues to reduce plant vigor.”

There aren’t a lot of good ways to get rid of verticillium wilt once you have it. You can attempt to solarize the soil by covering it with plastic and “cooking it” it several months—six or more, which isn’t a very practical solution in a packed garden. I decided to dig out the entire plant and as large and deep of an area of soil that I could. All of that went immediately to the burn pile.

I don’t see solarizing that area as practical for me, but I’m considering giving it a good burn with the weed torch. I don’t know that that will work, but I don’t think it can hurt.

I have another Lemony Lace elderberry in another part of the garden that was much more immature but by the time I went looking for it last spring it looked like there was a chance it too had the disease. I haven’t yet dug that one out. By the way, I asked the folks at Proven Winners who developed that plant if it was particularly susceptible to verticillium wilt and they said no more than any other elderberry. So I wouldn’t hesitate to plant it if you don’t have problems with other elderberries.

One of the plants that is susceptible to the disease is Viburnum and my garden is full of them. In fact there is a group of three large Viburnums not far from the elderberry I dug out and one was looking not quite right last year. I’m keeping a close eye on it but already I can see it doesn’t have the same flower buds that the others have. I’m crossing my fingers it’s not verticillium wilt that’s causing the problem.

The optimistic gardener would look at this as an opportunity to plant something new in that spot that is resistant to verticillium wilt. I’ll get there eventually, but I’m still sad this beauty had to go.