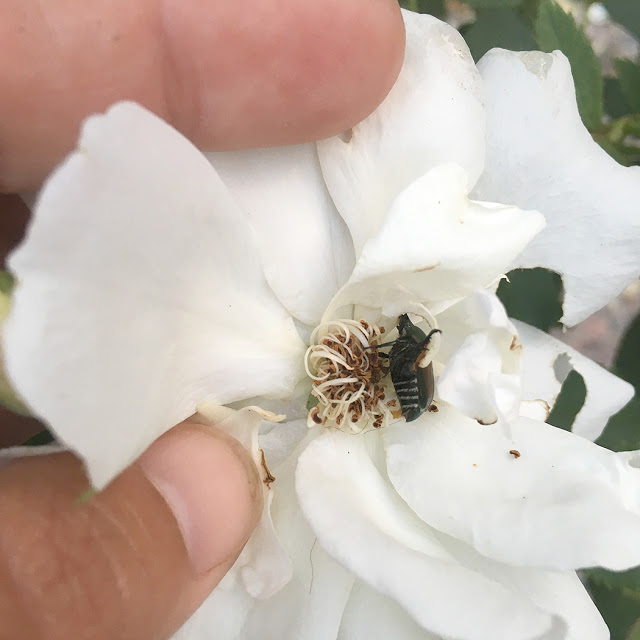 For years I’ve read horror story about Japanese beetles invading gardens. I’d even talked to local gardeners who have been plagued by the irridescent buggers. But until this year I’d never even laid eyes on one.

I read an article that suggested that our springs are too cold here (and particularly at my house near Lake Michigan) for them to get comfortable and take up residence and that seems like a logical explanation. Given the warm spring and very mild winter we had and the fact that I’m seeing them now for the first time also supports this theory.

I first noticed them a couple weeks ago when I returned from being gone for 10 days. I was admiring the new blooms in my potted rose (developing because I was diligent about deadheading before I left), and noticed something black in the middle. When I pulled it out, there was no doubt: This was the dreaded Japanese beetle I’d heard so much about. I promptly crushed it and then found two more in other flowers that met similar fates.

I’ve only found them in flowers so far but I’ll bet my total number of kills is up to 15 or so. And I’m not naive enough to think I’ve found all there are to find.

So far I’ve only found them in that particular rose, but I’m keeping an eye out for them elsewhere. They made a real mess of the flowers, chewing big holes in them, and I’m certain they are doing other damage that I’ve yet to discover. I’ve not noticed any leaf damage yet.

I’m concerned because some of their other favorite plants to munch on are viburnums, which I have at least a dozen of, zinnias and apples. I’ve checked the apple tree but I need to give the rest of the plants a close inspection.

I’ve also started doing some research on them, and it’s not hard to find. Here’s one good paper with some information from which I’ve just learned that squishing them is a bad idea because they release a pheromone that attracts others of their ilk. Turns out I should be drowning the little buggers in soapy water.

I’m not sure if Japanese beetles will be an ongoing problem after this year at my house. If we get a typical Wisconsin winter and spring, that may solve the problem (and cause others including making the gardener crabby), at least temporarily. Still, I’d have been plenty happy to remain one of the few who was blissfully unaware of this invader.

bugs japanese beetle roses
by Erin @ The Impatient Gardener
14 Comments
previous post: THIS VINE IS NO THUG (NO MATTER WHAT THEY SAY)
next post: FRIDAY FINDS: CELEBRITY GARDENS EDITION