The world outside my door appears to be frozen. Certainly nothing is growing, but I didn’t expect things to be shrinking. Sadly, there are a lot of things shrinking in my yard.

The deer are starving. This winter has been so snowy and so cold with almost no relent (we’re hoping for above-freezing temperatures this week which would be good for the soul and maybe, just maybe, decrease the size of the snow piles a little) that their food sources are buried or gone altogether.

Like most gardeners, I don’t have a particularly good relationship with the deer, but I can’t stand to see any animal suffer. What is concerning is that the size of the herds we are seeing are so much larger than in past years. Either the deer that usually hang out in the state park by our house are moving out in search of food or there are just a lot more deer. I fear it’s the latter.

Not only are the deer getting even more bold (you would think the 275 pounds of dogs that live at my house would have some effect, but the deer practically laugh at them), they are eating whatever they can reach.

Unfortunately the main targets in our yard were the six arborvitaes we planted to screen the neighbor’s house after we cleaned up a few dead trees in the woods. We bought Western arborvitae (Thuja plicata) Spring Grove in part because a neighbor planted several of them a few years ago and they grew quickly and were never bothered by deer even though they were planted along the road where the deer frequently stroll.

I’ve learned my lesson about “deer resistant” plants many times before, but I never even thought of protecting our trees for winter because they’ve never been touched by deer before. Usually, if the deer are going to make a meal out of something, they do it pretty early on in its time in our yard.

But now, all six of our Spring Grove arborvitaes have been “lollipopped.” That is, the only foliage that remains is the top 18 inches or so. In my experience, the bottom never regrows, but the tree will probably live, but only grow foliage from the level it’s at now and up. That isn’t so good for when you’re trying to block the view from your neighbor’s kitchen window.

I’m not alone in this. The aforementioned neighbor with several Spring Groves that rapidly grew to about 20 feet tall suffered the same fate. The bottom 6 feet of his trees have been stripped.

The deer are munching on other things as well. Nothing within their reach is safe. The dwarf apple tree buried in a snow bank has ragged ends on every small branch, all nipped by deer. The same goes for the Limelight hydrangea in front (I’m not worried about this as it’s destined for pruning anyway). The damage around the yard is extensive and is only likely to get worse.

By they way, I know so many people are buried under piles of snow so you probably don’t need to see pictures of more snow. Too bad, you’re getting some anyway.

These were taken Sunday, before another 6 inches fell Monday (and proceeded to blow into giant drifts). Testing paint samples on the front of the garage in fall sure looks like a great idea now, doesn’t it? No one can say I haven’t given the color a great deal of thought, though. 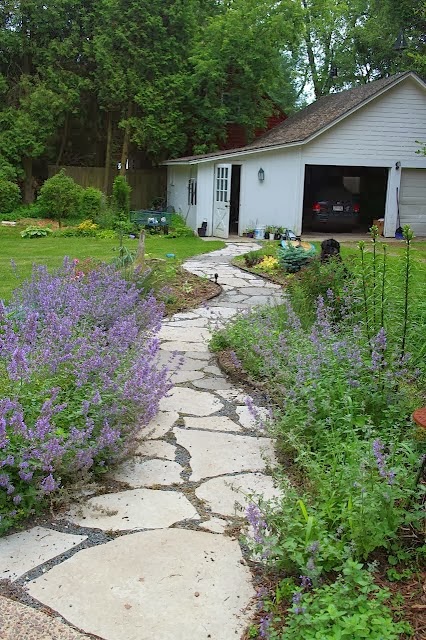 My poor meatball boxwood always gets crumpled in winter. It’s hiding under there somewhere.

Hard to believe this is what it looked like under that snow pile about 6 months ago, isn’t it? 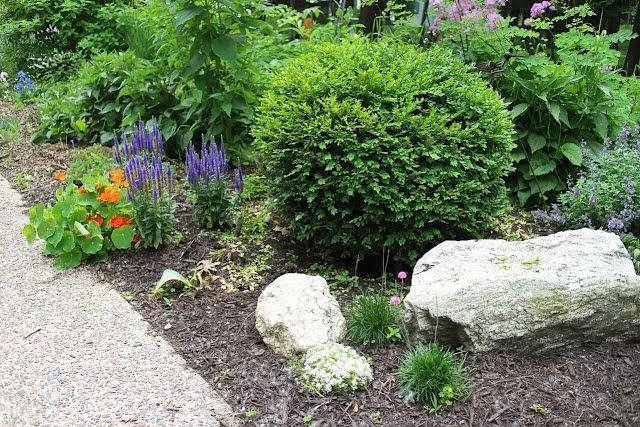 Have you noticed the wildlife in your area getting a big desperate with the crazy winter that so many of us are having this year?