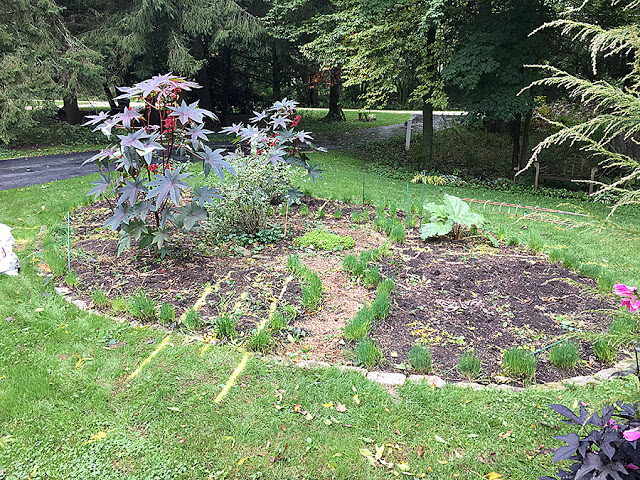 I didn’t have much time to work in the yard last weekend, which is sad indeed. It has been raining here for days and days and there were other projects that took precedence (which you’re about to hear about).

The few hours that I did have for garden time were dedicated to working on the oval circle garden update. Mr. Much More Patient and I spend almost two hours laying out the whole plan. Since it’s meant to be symmetrical, being precise was important. But precision in an oval is difficult, especially when the original oval wasn’t perfectly precise.

We spent hours with a tape measure, stake and landscape marking paint drawing lines and dots, to the point where we forget which dot was which. (Not to self, always have at least two colors of landscape paint for these projects).

We got it all laid out and later I came back to start moving things around. The first step was heeling in all the chives from the areas that will be changed. For the most part, the outer rim of chives can stay where it is, but those along the paths had to be moved. Since I knew where the new paths are going to be, I forked over a segment between them, doing my best to root out any weeds and then just heeled in chives from other areas. The soil in that segment of the garden, which was originally used for tomatoes, is so lovely to work in, it really wasn’t difficult to do. Then I started popping out the cobblestones on the inner ring of each segment.

I’ll be widening the paths from the existing 16 inches to a much more realistic 24 inches, so there’s a fair amount of moving to be done.

As I took out some cobblestones I came across the dreaded landscape fabric. Yep, I put that nasty stuff down under the pea gravel paths and that was all well and good until weeds started growing in the paths a few years later. I’m wondering now if that fabric will make pulling up the pea gravel easier or more aggravating. I’ll find out soon enough.

Still lots of cobblestones to move and then that nasty pea gravel to deal with. As usual this project is progressing a snail’s pace, but there’s nothing to be done but keep on plugging away.

chive hedge circle garden garden design oval
by Erin @ The Impatient Gardener
5 Comments
previous post: MONDAY MUSINGS
next post: A BEFORE AND AFTER 3 YEARS IN THE MAKING