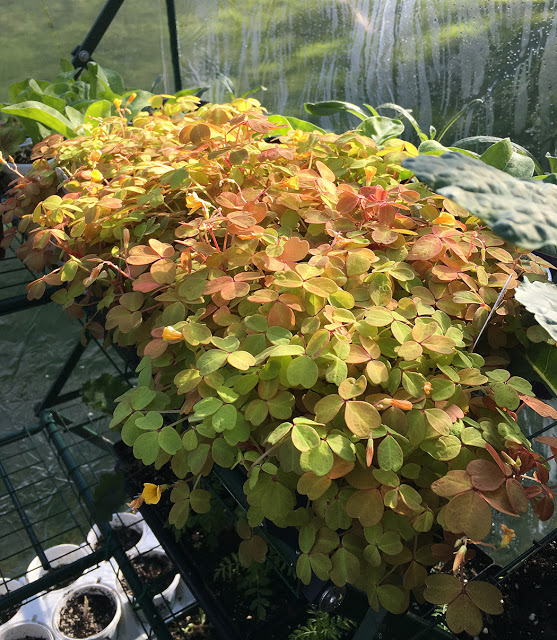 I got a message from a friend and blog reader the other day who asked, “How come you aren’t blogging about planting?”

It’s a fair question, this being primarily a gardening blog. The fact of the matter is that it’s still really cool here and there is very little to plant. I did sow a few very small areas of peas, lettuce and argula a couple weeks ago and there’s pretty much nothing to report on those.

But there are other, somewhat random things happening in the garden that I don’t feel are worth a post, but maybe worth a little update.

I took my first trip to a nursery over the weekend. The whole world is out shopping at nurseries because of course Mother’s Day is this weekend and people equate Mother’s Day with the time to plant. That couldn’t be further from the case here, but old habits die hard. I think the nurseries here push annuals and hanging baskets for Mother’s Day in part because they know things will be set back by the cold and people will buy more later. Our last frost date isn’t until May 10, so it’s way too early to be thinking about planting annuals here.

That said, I, of course, bought a handful of annuals, because I just couldn’t resist and I suffer from plant-related FOMO (Fear Of Missing Out). So I grab things when I see them and nurse them along in the greenhouse until it’s time to plant, usually around Memorial Day.

A lot of people have asked about my greenhouse. Here’s an affiliate link to it. I really love it, but it’s important to keep in mind that this is a temporary structure. The plastic cover ripped quickly last year and the company sent me a replacement, but the same thing happened again this year. It’s a tiny tear on a seam that I easily fixed with tape, but I think it’s worth mentioning.

I’d been to neither of the two nurseries I visited on Sunday, which is rather alarming as I thought I’d been to every nursery in a 50-mile radius. The first was not great, but unbeknownst to me they were holding a sale with very small, single plant hanging baskets for $5 each. There was a cop directing traffic into the parking lot! It was really no way to experience a nursery for the first time. Mostly it was just chaos.

The second nursery was amazing and I eagerly signed up for their frequent buyer program because I have a feeling I’ll be going back many times. Even my husband knew about this place and it was completely unknown to me. I’m so disappointed in myself. They were still waiting for a lot of deliveries but they had a huge, clean, well organized annuals greenhouse with exceptionally well cared for plants that were not overpriced. I picked up three Oxalis ‘Molten Lava’, which is not new, but new to me. I love its mounding habit and orange to lime foliage. 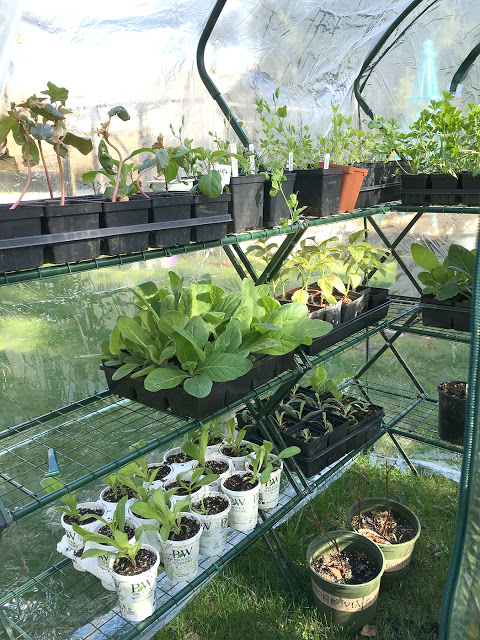 Speaking of the greenhouse, it’s starting to fill up and I’m happy to report that everything seems to be doing well despite the cool weather. The exception is the sweet peas which are looking a little anemic and I think they desperately need some feeding. 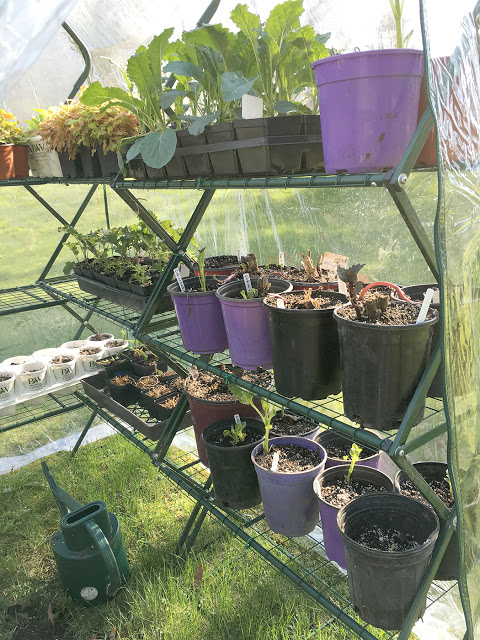 That is only about half of the dahlias. The tubers that haven’t sprouted yet are still in the house. Where in the world am I going to put them all?

I worked on the garden to the north of the house this weekend for a long time and looking out the upstairs window it looks like I’ve made very little progress. I did, however, repaint the obelisk we built several years ago. I finally found a spray paint line with better color selection: Montana Gold. Granted, it’s about twice the price of a regular can of spray paint (about $8), but the colors are worth it and the coverage is great. The old apple green faded and I gave it new life in a bright turquoise.

I think this year I’ll grow some climbing nasturtiums up it for some additional color. I removed the goji berries from this raised bed because they got too big and their big, thorny canes, were reaching out and grabbing me. I’ll find another spot for them, but for now they are living in very large nursery containers.

That’s the report from here. I’ve been gardening until dark, setting a goal of filling a tub trug with weeds after dinner every night that it’s not raining. I’m so happy that the sun doesn’t set until about 8 these days.

What’s up in your garden?