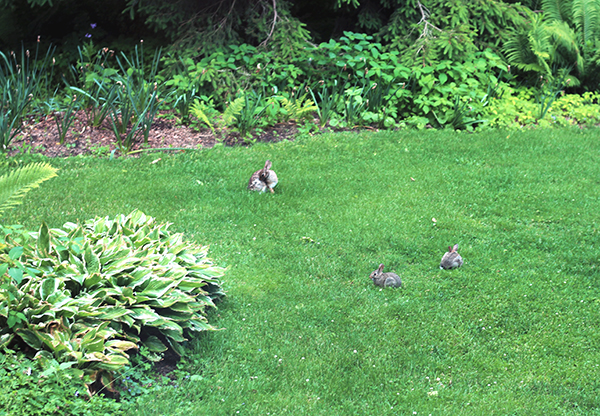 Sometimes you think you’ve seen it all in your garden. This is our 15th summer in our house so I feel like I’ve got a pretty good handle on the comings and goings in our yard. But this year I’ve been presented with an issue I’ve not faced before.

Rabbits. Many, many rabbits. Last night I identified them in five sizes: X-small (teeny, tiny, just barely hopping cuties) through X-large (rather worse for the wear moms, or so I’m thinking). I did this within five minutes, because that’s how much time passed before I saw all sizes and more than 10 of them. This, folks, is a problem.

While we’ve had the occasional rabbit, especially several years ago when I’d find the occasional nest, it has been at least five years since I’ve seen a single rabbit in our yard. We’ve had a very healthy fox population in our neighborhood, not to mention hawks, owls, coyotes and more, that I assume took care of the issue.

Mr. Much More Patient saw a fox the other morning but that’s the first sighting of the year and the neighbor reported they found a dead fox on their property last week. This not good.

Whatever the reason, the rabbits are a concern. I’ve been able to minimize the damage by being vigilant with deer/rabbit spray, but I know this is a system that is bound to fail. At some point they’ll either stop caring about the spray or I’ll forget to reapply to new growth or wait too long after a heavy rain to spray again.

The enormous hairy dog who sheds liberally around the yard, pees even more liberally and chases and barks at a lot of critters seems to have zero effect on the rabbit population. I’ve not been able to find where they are nesting or hiding, but every time I turn around another one seems to be hiding under a hosta. Last night three micro-bunnies shot out from under a ‘June’ hosta at a blistering pace but I lost them when they hid under a globe spruce.

So as much as I hate these critters, and as much as I wish some predator would come along and solve my problem for me, I can’t personally hurt them. I realize that is a little ridiculous and comes down to semantics, but I can’t personally harm them. So does anyone have any suggestions for me on how to get rid of this rabbit issue without a fence, BB gun or a rent-a-fox?

garden pests garden problems
by Erin @ The Impatient Gardener
10 Comments
previous post: MY QUEST FOR THE PRETTY GOOD LAWN
next post: HOW THIS YEAR’S CONTAINERS CAME TOGETHER