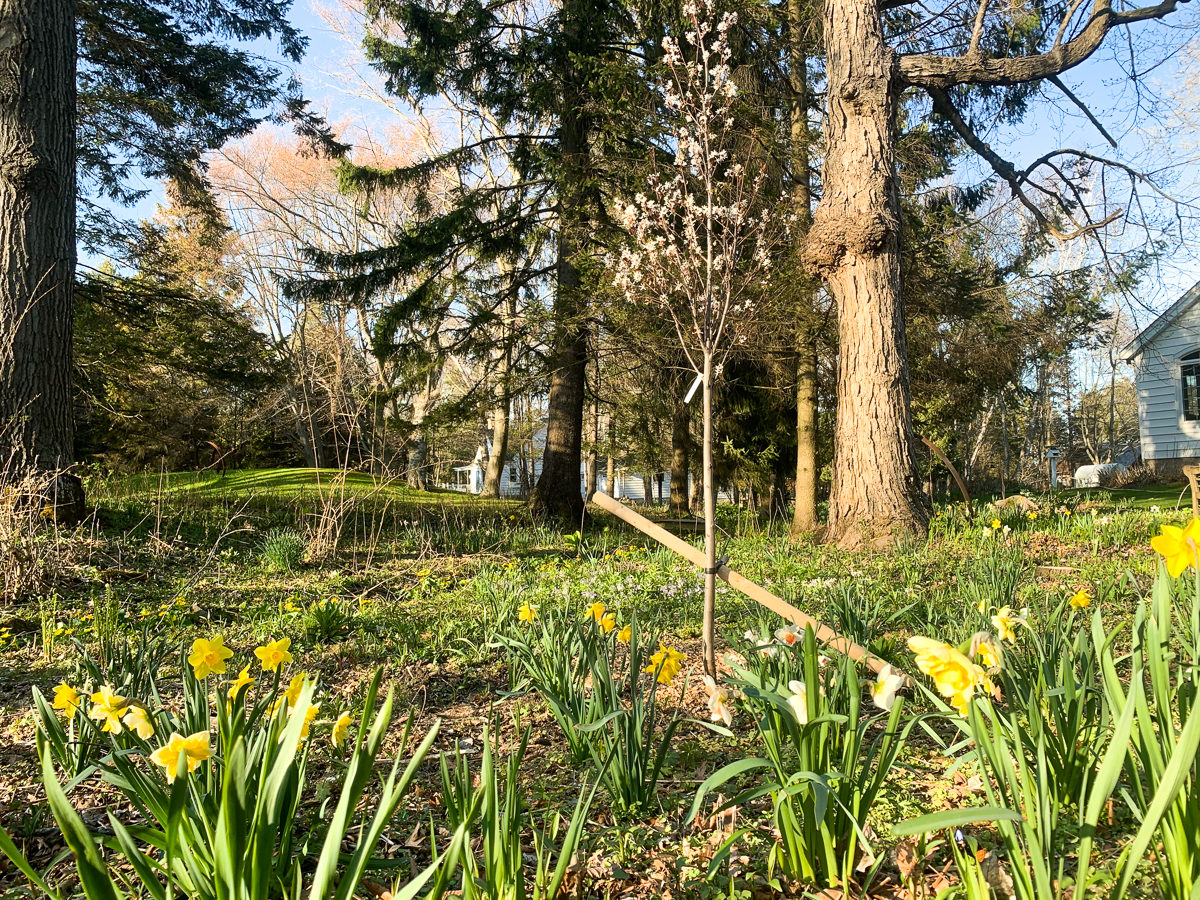 We’re coming up on 17 years in this house. How that happened I have no idea, but one mark of the passage of time here has been the coming and going of trees.

For many years we didn’t cut down any trees here. They were all healthy and more or less where we wanted them. First some of the birches died. Birches are not long-lived trees here and most of the birches on our property were about the same age, so they all started dying at the same time. We left most of them to their own devices in the wooded area, but others had to be taken out, including one enormous one to the east. 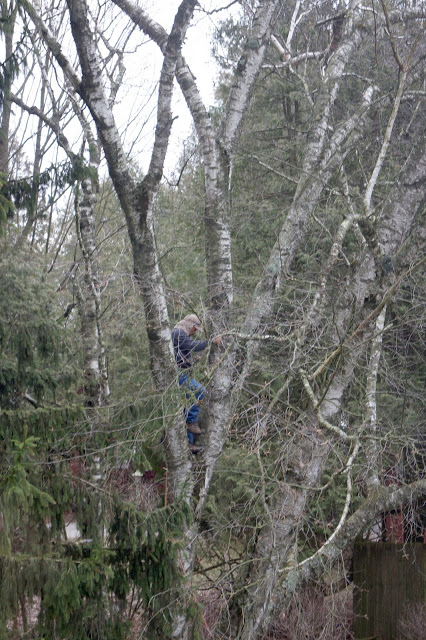 Our tree guy made swift work of the giant birch tree to the east of our house.

There were a few casualties of rotten winters as well. A March snowstorm some years ago leaned a big cedar right onto the house. It was a tree we thought we loved right outside the living room window, but as soon as it was gone we couldn’t believed we’d lived with it right out that window for so many years. 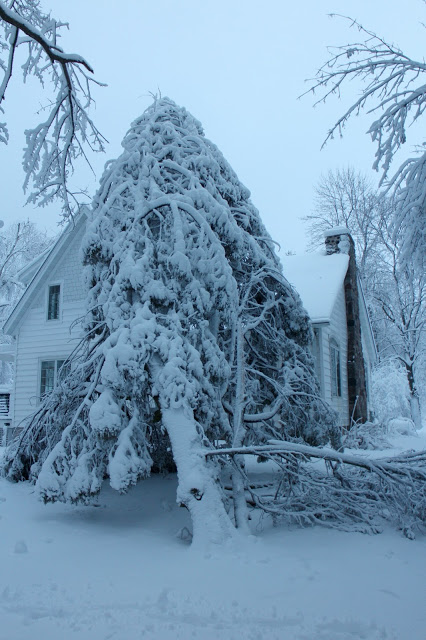 And then, of course, the ash trees started going. If I had to guess I’d say we’ve taken out 10 ash trees, and those are just the ones that we deemed were a danger to people, dogs or the house.

We’ve also taken out a few trees that were otherwise in good shape. A couple years ago we took out an enormous spruce at the end of the driveway that was really ugly at the bottom and tall enough to block all evening light on the patio. A few others came out when we built the vegetable garden.

I don’t begrudge people their views on their own property. Some neighbors who live on the lake have trees that block their view of the lake and I know that if I lived there (and paid for that view) those trees would be out. But mature trees are one of the reasons we bought our house rather than something in a new subdivision. And I have a lot of guilt about the amount of really big trees that we’ve taken out over the years either by choice or necessity. I feel guilty, but not regretful. Every time we’ve taken out a tree I’ve been happy about it either because I could sleep better on a windy night not worrying about a mostly dead tree crashing onto the house or because suddenly light and air was created by its absence.

So we’ve made a concerted effort to plant trees when possible. Last year I planted 12 (the hornbeams , the pagoda dogwoods and the Alberta spruces at the driveway garden and the Japanese maple near the garage). So far this year I’ve planted four and another two are waiting to go in the ground.

This Cornus Kousa ‘Satomi’ is in the primo spot in our yard right by the patio and the frequently walked path to the garage. Nearby I planted Salix purpurea ‘Pendula’, a small weeping blue willow that I think  will be the textural contrast that bed needed. This replaced the magnolia that died two years ago. These two trees are part of a complete redesign of this part of the garden that I’m excited to show you once I get all the plants in hand. 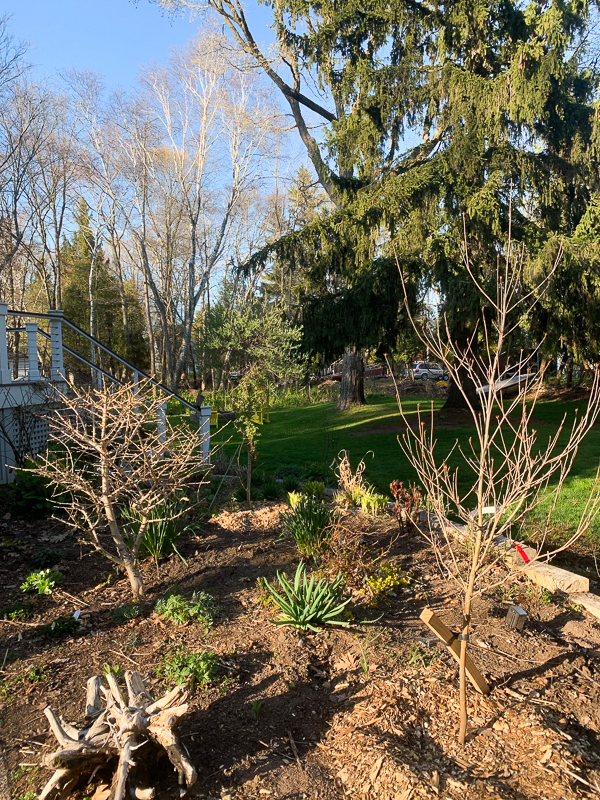 The new kousa dogwood ‘Satomi’, on the right, takes the place of honor as one of the most visible trees in the garden. Ginkgo biloba ‘Gnome’ is to the left. 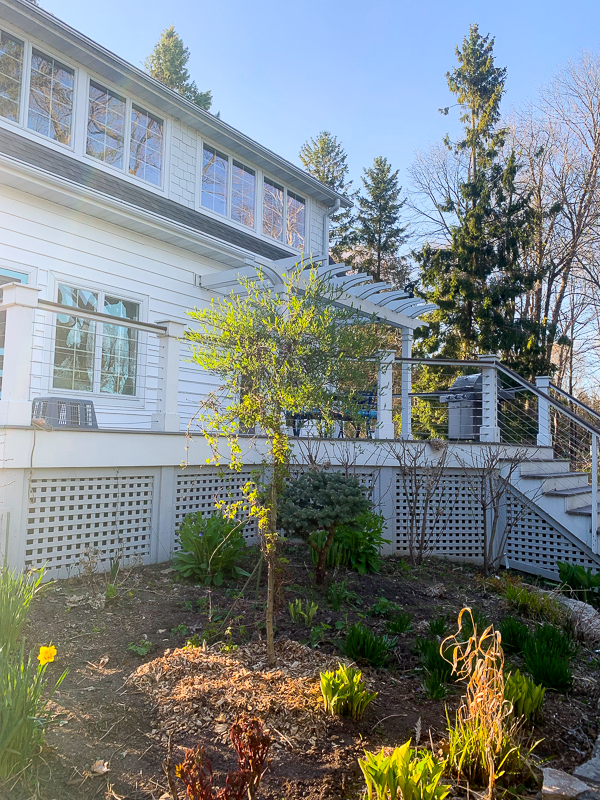 Salix purpurea ‘Pendula’, a small weeping willow, replaces a magnolia that bit the dust two years ago in a spot off the deck. I find it challenging to choose a tree for this spot because it’s most often viewed from the deck.

I also planted two Amelanchier ‘Autumn Brilliance’ (aka serviceberry) on the edge of the wooded areas. Technically serviceberries are understory trees so I think they’ll do well in this area. Importantly they are also deer resistant, native and offer at least three seasons of interest. I purchased them bare root through a fundraiser and I was shocked at their size when I picked them up. They were at least 8 feet tall, maybe more and when I went to pick them up about 40 minutes from home, the nice man who helped me load them suggested there was no chance I was going to fit them both in the car. 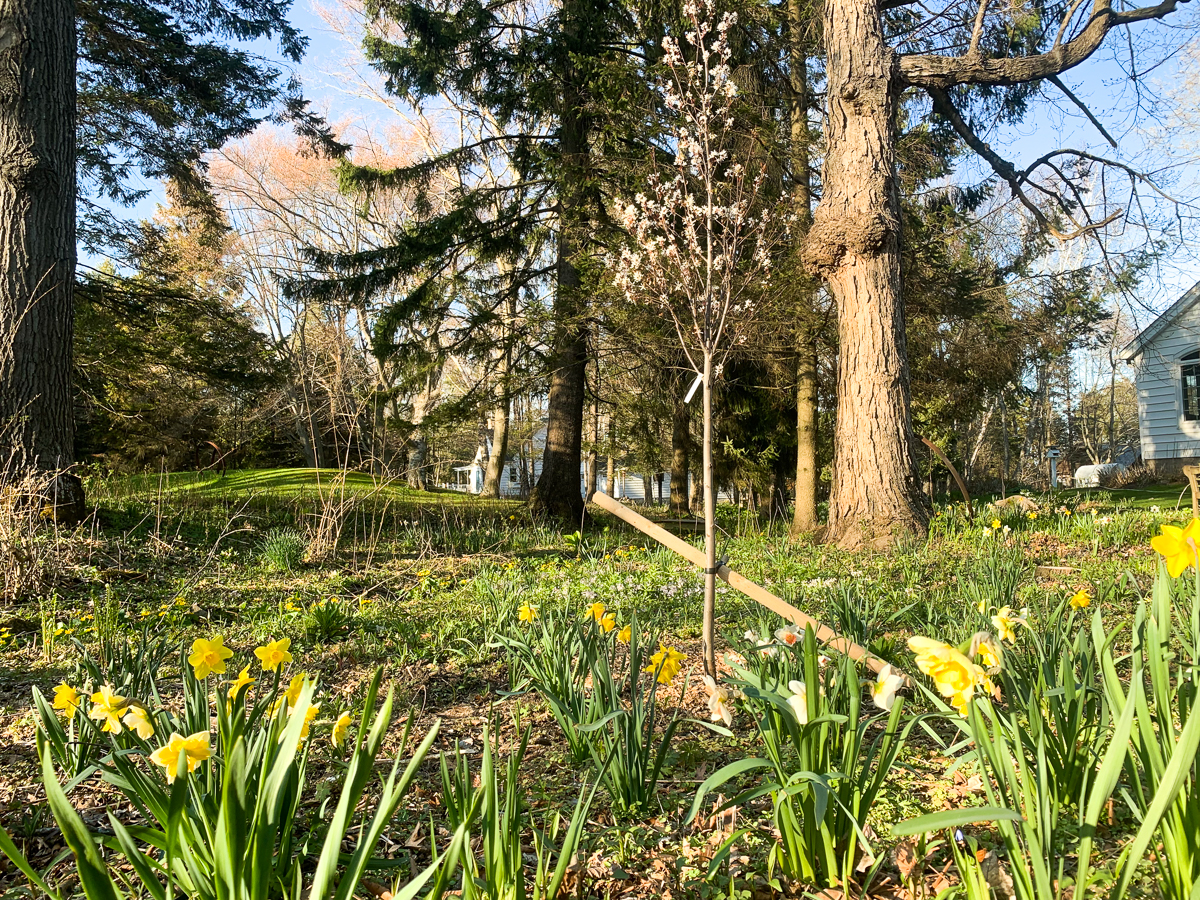 Challenge accepted. I folded down the back seats and reclined the passenger seat and jammed those things all the way up onto the dashboard. Sure, by the time I came home I had serviceberry bits in my hair, but I got those babies home.

I take a great deal of satisfaction in planting trees. Perhaps it’s because I feel like it’s a bit of a checkmark in the “Trees Planted” column of my tree balance sheet (although none of these trees mitigate the loss of a huge old tree) and it helps ease my guilt. But I think it’s also because years from now, when my time on this property is over, there’s a good chance my gardens won’t have the same appeal to someone else, but the trees will likely remain.

For more on tree planting, check out my YouTube video about how I plant trees (and some of the tree planting misconceptions that you really shouldn’t pay attention to). It features planting both bareroot (the Amelanchier) and balled and burlapped (the dogwood) trees.