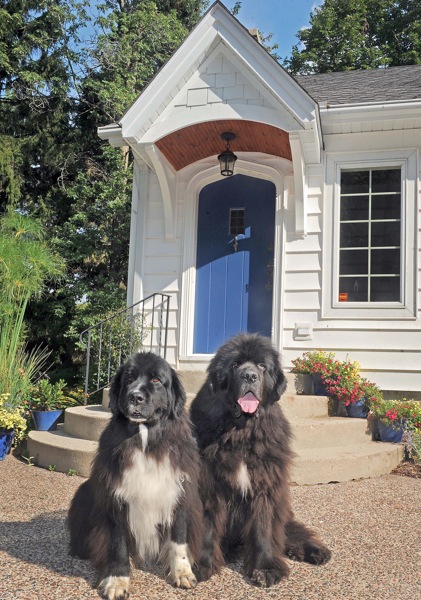 Resident supervisors Rita and Hudson posed for a photograph for the newspaper photo shoot a couple weeks ago.I’m just realizing now that somebody should have washed Rita’s feet first.

In continuing to revisit the renovation roughly a year after it got started, I thought I’d put together a list of things you should know if you are considering a renovation of your own. This list got a little longer than I anticipated, so I’m breaking it in to two posts.

1. Even though you’ve heard that every renovation goes over time and over budget, you will talk yourself into thinking that with all your planning you will be the exception to this rule. You are wrong.

We budgeted an extra 10 percent into our loan to cover the surprises. Believe it or not, this was at the suggestion of our lender and our contractor swore to us that he would do his best to bring the numbers down as the project continued. Although the financial situation got so dire during the renovation that I stopped keeping track of it all, but we probably finished about 30 percent over the original budget. As for time, the project took about 50 percent more time than we expected, due to hiccups with supplies of some items and various other issues that hung things up.

Even if you’re building or renovating and you’re a single homeowner (and if you are, I applaud you), you need to have another person involved. That’s because you need to have a person on reserve to wear the black hat. There will be times that have an issue with a contractor and you need one person to be sweet and understanding and another person to be the nasty one pushing for things to be done correctly. I handled most of the day to day things, but when something serious came up, or when I felt like I was getting the “you’re-just-an-irrational-woman” brush off (and yes, I do think that happened), Mr. Much More Patient would step in handle it. I think our contractor knew that if he got a call from the husband he knew we were serious about something.

Throughout the entire renovation I constantly felt like I was walking the line of being a pushover or being a bitch. It was difficult to find a middle ground. Certainly you don’t want to come out of the gate swinging on a project, but you also don’t want to come across as a person who will let them slide with subpar work.

4. Make every decision you can ahead of time.

I did pretty good on this. I had plumbing fixtures chosen and delivered for months before they were needed. Tile was picked out before the bathroom was even officially drawn on paper. But there were other decisions that came up out of nowhere and needed to be made quickly. I expected to have a couple of weeks to figure out what we wanted for the roof. We ended up having a weekend to pick out the style and color of shingles as well as underlayments, etc. It’s important to make decisions in a timely fashion to keep things moving along, and I found that the contractors seemed to have a lot more respect for us when we were able to quickly make decisions. Having so many things decided ahead of time (and then not second guessing ourselves: I did not look at a single bathroom picture on the Internet after we picked out tile and fixtures because I was afraid I’d find something I’d want more) made making the quick decisions a bit easier because we weren’t thinking about tile, plumbing, lighting and roofing … just roofing.

5. But don’t be forced into making a decision you are not comfortable with.

No matter how much pressure a contractor is putting on you to make a decision, do not allow yourself to be forced into making it until you are truly comfortable with it. You may delay your project a bit, but it will cost more in the long run when you can’t stand it and have to go back and fix it. This is what happened with the shingle siding on the upper half of the house. We went back and forth on where it should be and we were getting a lot of pressure on making the decision, and what that decision would be. We were both suffering from renovation fatigue and we sort of threw up our hands and said, “Yeah, whatever,” and we ended up with the shingles starting higher than we’d like them to. We actually bought additional shingles to have it fixed, but we’ve since had a falling out with our contractor so we won’t have them do it and I just haven’t bothered to look for someone else to do it yet. Everyone told me I wouldn’t notice in a few months. I do. And it bugs me every single time I look at the house. Every day.

Check out Part 2 for more information.

remodel
by Erin @ The Impatient Gardener
2 Comments
previous post: Books to paint by
next post: Things to know before you reno: Part 2