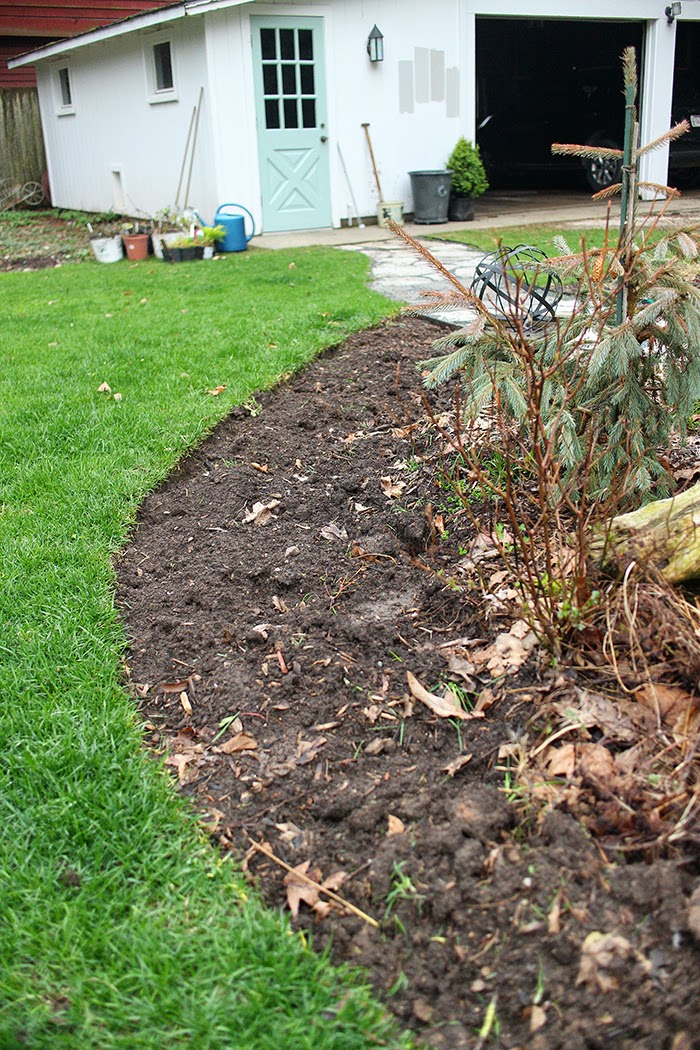 You think this is going to be about weeding, don’t you? Well, I do detest weeding, but it pales in comparison to the garden job that I truly abhor: pulling up sod.Last weekend I finally had the guts to cut the bed lines for the new side/back yard. I sort of had to; the can of landscaping spray paint I bought was almost gone after redrawing the lines four or five times when I either changed my mind or they were snowed or rained on. I either had to cut or buy another can.

The cutting is no problem, but when it came to pulling up the sod, well, that just stinks. Removing sod is such a lousy job. First of all, it’s hard to cut that stuff into pieces without a sod cutter. And it is SO heavy. I also knock off as much soil as I can both to aid in moving it as well as to keep the cost of any soil I might have to add down. And then you need to find a place to put it all (usually I just turn it upside down and make a pile in the woods which breaks down and becomes compost at some point), and that means filling up the wheelbarrow and moving it all. And as weird as this sounds, I usually check the sod pieces for worms and throw them back in the ground because I don’t want to waste any worms in my garden.

There are very few jobs I would ever entertain hiring someone to do in my garden (I’m far too particular), but this is definitely one of them. Except I can’t think of anyone who would actually do this or what amount of money they’d charge to do it.

I probably got about halfway through the sod removal process over the weekend. The plan was to finish up this week after work but it has been raining almost nonstop since Sunday night.

This is where I stopped on Sunday afternoon. That part of the bed will go as far as the closer post on that set of stairs. I actually left the spade right there in the ground and walked away. Bad gardener! 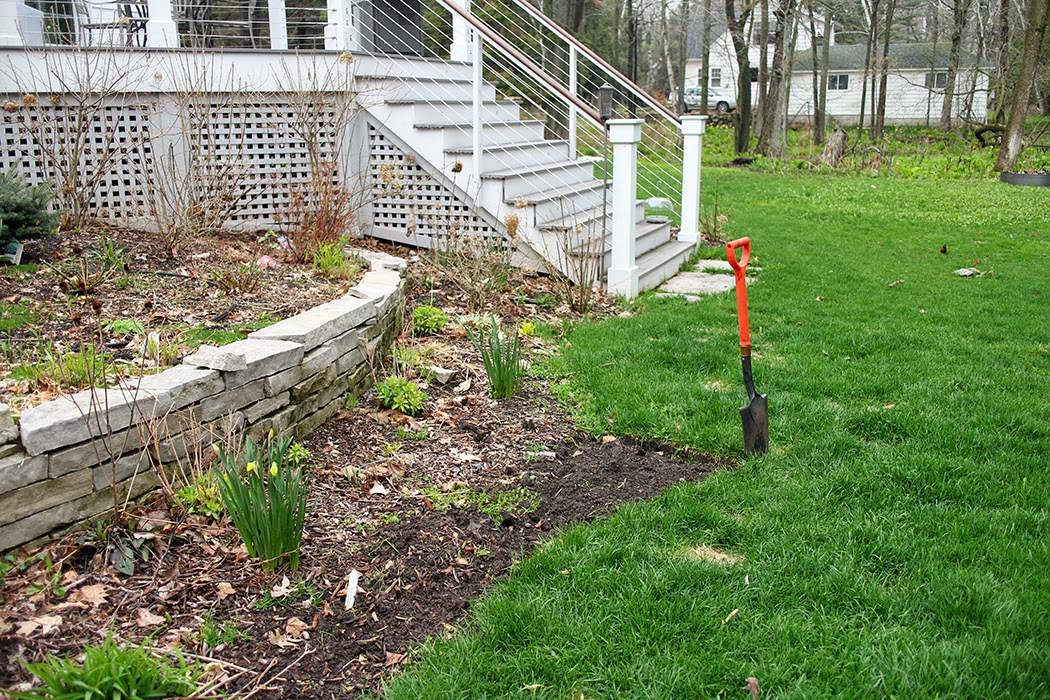 The upstairs window in the bedroom really comes in handy for getting the bigger picture of what’s going on in the back/side yard. I made the bed that crosses the path a little bigger to make it into a true oval. From this view it looks like the top left bit of that bed, to the left of the path, got a little flat so I’ll have to go back and fix that. I will be moving the stones that create a mini path to the left of the path up and bend them around to create the border on that side of the bed. It looks like my cutting got a little sloppy where the large oval of grass meets the oval across the path, but that’s easily fixed. I’ve not done any sod removal at all on the far side up by the garage, but once I get up there I think the whole design will make much more sense.

You can see in the photo below that I also changed the main bed in the lower right of the photo. I extended the curve of the stone wall back to the path rather than swooping it up. I think that makes more sense. I’m trying to grow a bit of grass in that area now, although as you can see, growing grass is not our strong suit. 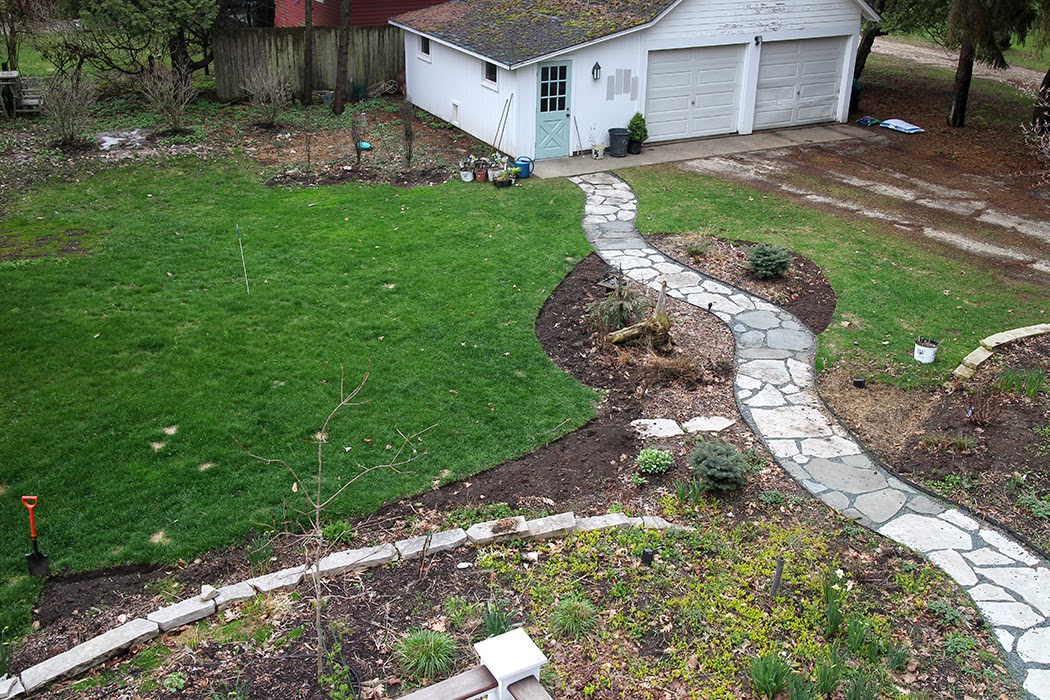 In the meantime, I’ve dug out and potted up most of the plants that were in the small bed by the garage. I also divided the Hakenachloa ‘All Gold’ from the west side of the house which will be prominently featured in the shadier parts of the new back/side yard.
Everything seems to be managing just fine in the pots, including the three clematis that lived in that bed. I will have to be good about not letting them bloom their hearts out this year so they put more energy into getting established in their new spots than into flowering. That’s tough for any gardener to do. 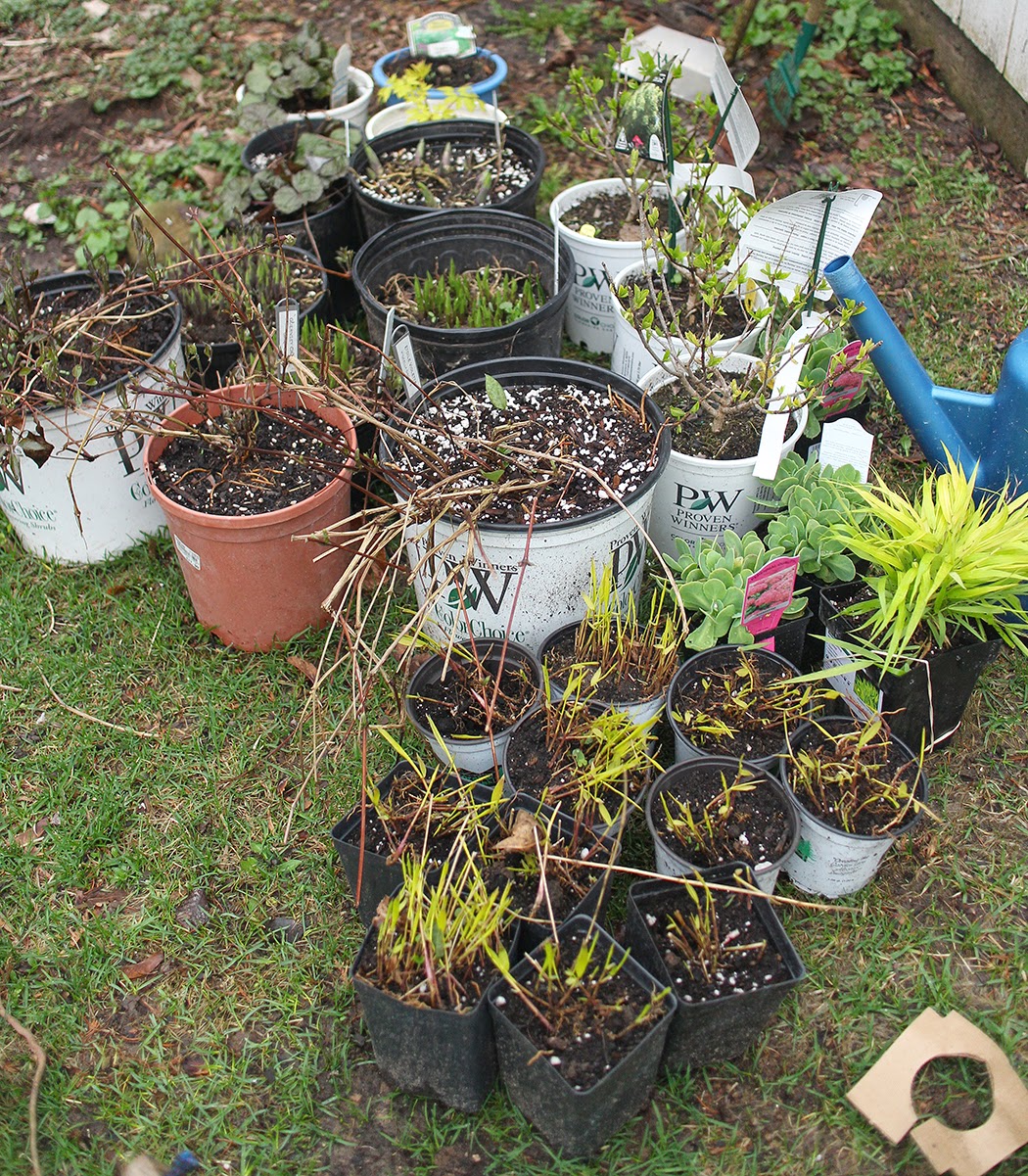 Once all the sod is removed, I will have to go back and amend the soil in those beds. It’s not horrible, but every time I’ve not taken the time to amend soil in a new garden from the beginning, I’ve regretted it and I don’t want to make that mistake again. I will be very happy when all the prep work is finished and it’s time to plant.