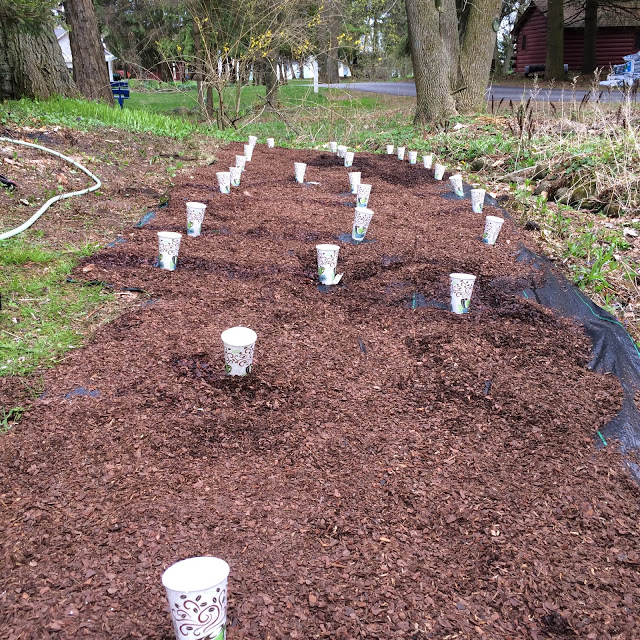 My apologies for the absence last week. If you follow me on Facebook  or Instagram you’ll know that I was down in Austin for a Saturday6 (Troy-Bilt’s blogger team) event. I had all kinds of plans to get some posts up but I ought to stop making plans like that because it never happens. We had a fabulous time and I’ll share some pictures with you later this week. There were lots of highlights, but the best part by far was that we got to do some gardening while we were there! It felt so good to get in the dirt again.

Do you remember my willow experiment last year? Inspired by a post and interview on Margaret Roach’s site, I ordered all kind of willows from Michael Dodge’s Vermont Willow Nursery and planted them in a hastily organized nursery bed.

I devised a somewhat odd plan in which I used coffee cups to try to focus some water around the roots of the willow twigs because the nursery bed was a bit sloped. Most of them took off growing and I pretty much forgot about them.

By the end of summer, most were alive although hardly thriving. Two that I had planted in gallon nursery pots were doing better even though they had been nibbled upon by deer. I had actually originally planned to put them all in pots for the first year, but I ran out of gallon containers when my dahlia buying got out of control.

A quick survey of the willow nursery suggests that I won’t be bringing any willow branches in for forcing this spring. In fact, I’ll be interested to see just what actually comes back.

It’s a lesson that I seem to have to relearn every so often: Just because a plant is easy-care, doesn’t me it doesn’t need care, especially at first. I know this, but I allowed myself a pass.

I’ve ordered more willows. All of them are purpurea varieties said to be distasteful to deer. I still have high hopes of some day creating a fedge that might help slow the deer traffic through our yard and I love the decorative aspects of a weaved fedge. It’s a long-term goal, to be sure, and the fact that I accept it as such is either a sign that I’m finally really starting to accept that gardening takes time or a sign of the coming apocalypse.

Assuming it’s the former, these will be grown out in pots this year. And if they aren’t appreciative I’ll show them the willow nursery bed and tell them they better behave.

experiment willow
by Erin @ The Impatient Gardener
3 Comments
previous post: REVIVAL OF A GARDENER’S SOUL
next post: WAITING FOR SEED SIGNS OF LIFE