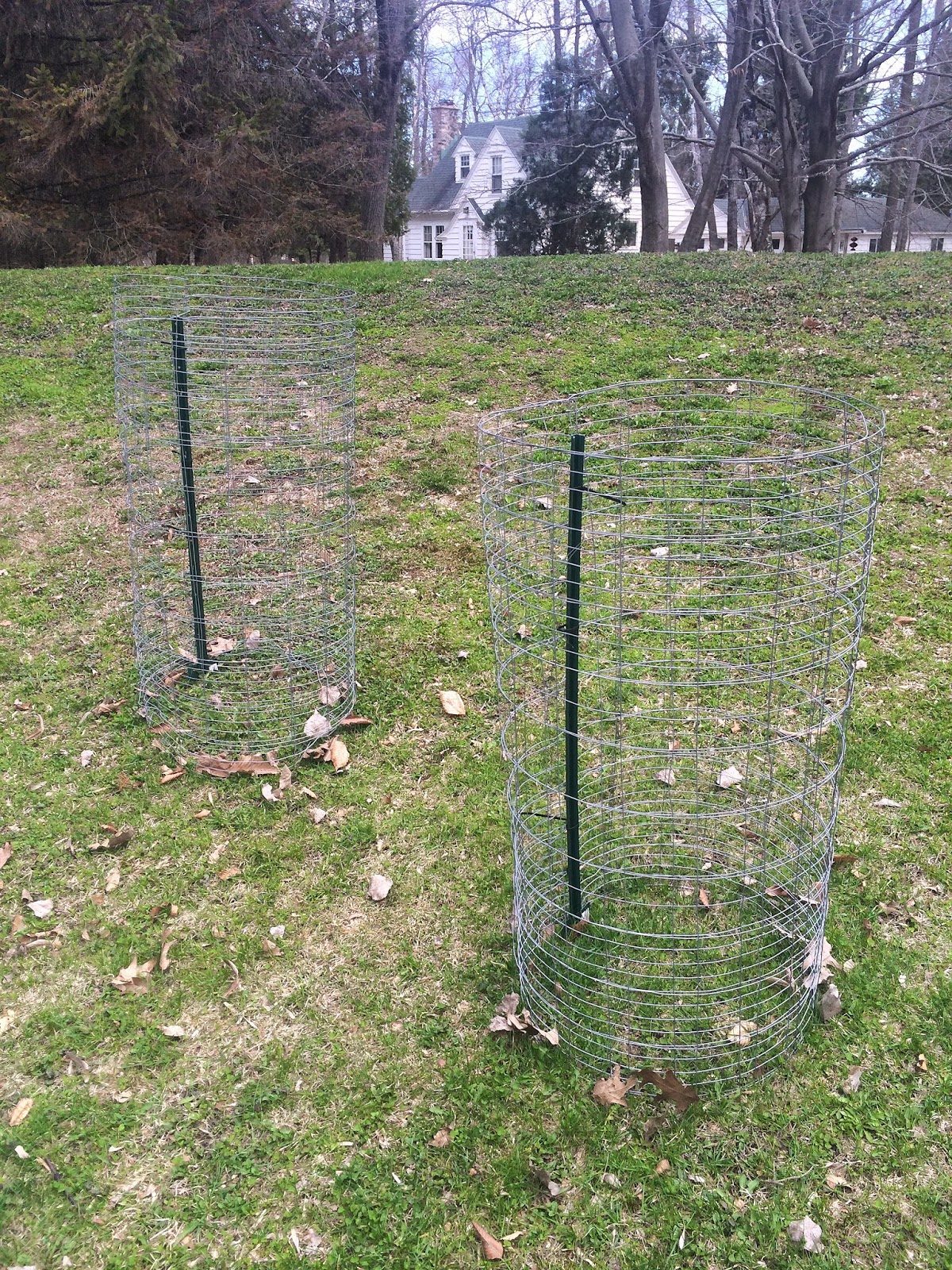 I grew potatoes for the first time last year at one of the community garden plots my mom and I share. Despite the fact that I had no clue what I was doing and the soil in the new plot was very, very poor, we got a small but delicious crop of fingerling potatoes. The harvest was that much more appreciated since I’ve been trying to avoid non-organic mass-produced potatoes ever since I read “The Botany of Desire.” Great, interesting book by the way, but not recommended if you want to keep eating the reasonably priced potatoes at the store.Last year’s success was enough to make me give it a go this year. The problem with potatoes is that they take up a fair amount of space in the garden and they are prone to disease, which makes moving them every year, important. Complicating the issue is that they can pass illness to their cousin the tomato, so you have to avoid rotating them with tomatoes as well.

I’ve been intrigued with some of less traditional ways of growing potatoes, including in grow bags and even garbage bags. But to me, the potato tower idea made more sense.

There are several methods for creating a potato tower. I read about a lot of them, including several on Pinterest and one from Fine Gardening magazine, and came up with an amalgamation. 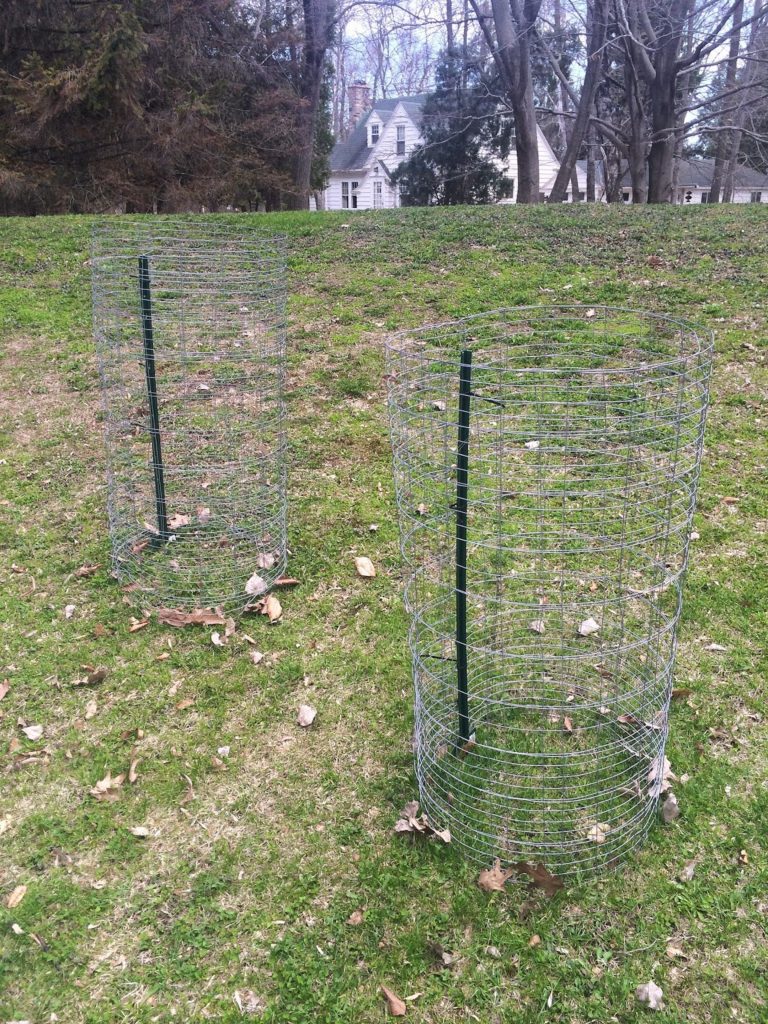 I started with a metal fence support, just the green kind that you pound in to the ground. Then I used plastic wire ties (aka zip ties) to attach a circle of fencing to the post. The instructions I read all used different types of fencing. I avoided hardwire cloth, which typical has half-inch squares because it seemed like that would be hard for stems and leaves to sneak through. Instead, I bought rabbit fencing, which has 1-inch by 4-inch holes on the bottom and 4-inch square holes on the top. I did a double layer of fencing, flipping the bottom to the top on the second layer, just so the holes weren’t so large.

Then I started the layering. I did four layers in each of my two towers. Each layer is constructed by putting down a bed of straw and lining the edges with about a 2- or 3-inch thickness of straw, then putting in a “core” of soil in the middle. For the soil, I used a combination of purchased top soil and mushroom compost or leaf compost. On the soil layer, I threw in about 4 or 5 inches of blended soil, then put in the seed potatoes, a few inches in from the edges with the eyes or sprouts facing outward. I covered it with an equal amount of soil and watered it thoroughly. That completes a layer. 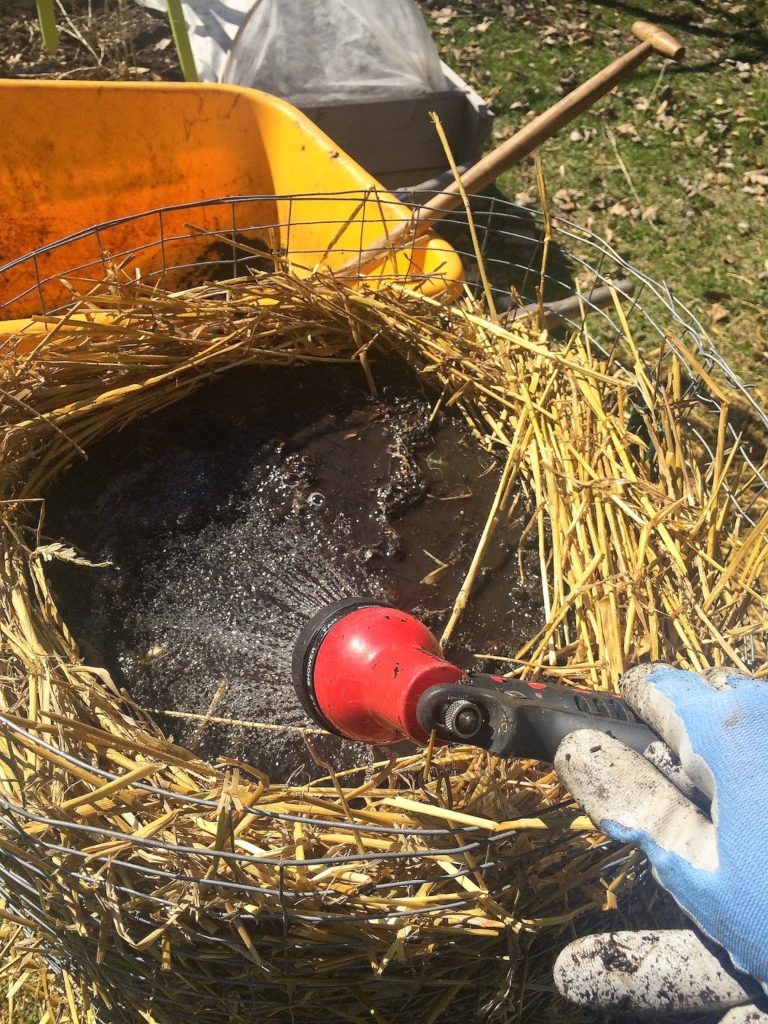 Then I just repeated that process in each tower. Since I was doing two towers, I found it easier to do a layer in each tower before moving onto the next tower. The key is to keep the straw on the outside packed pretty tight to keep the soil in and the light out.

When I got to the final layer, I left some room at the top of the tower to add more mulch as needed to continue covering the shoots. I also watered the entire tower really well. One of the negative comments about potato towers is that they dry out too much and it’s difficult to keep the potatoes properly watered, so I intend to keep a close watch on that.

If all goes well, the towers should be covered in leaves as the potatoes grow (which I sincerely hope because they are not the most attractive things) and when it’s time to harvest, I should be able to just knock the towers over, pull out the potatoes and compost everything else.

I’m willing to experiment a little to get some great potatoes, but I think it’s safe to say this is probably not one of those money-saving things. I had to buy everything for this project. Granted, I can reuse almost all of it in future years, but there was definitely an upfront cost. And obviously I didn’t need an entire roll of rabbit fencing, but I had to buy a whole roll to get what I needed so I’m including the entire roll cost in my tally.

So here’s the cost so far:

Grand total: $57.30
Let’s say organic potatoes cost $2.50/pound (I usually buy fingerlings which are more expensive). That means I need to produce about 22 pounds of potatoes to break even. We’ll see what the season holds, although I think it’s worth pointing out that I rarely grow my own food for economic reasons. The taste and satisfaction I get from growing food is generally worth whatever it costs.
Don’t worry, I’ll keep you updated on how the towers work out.

Interested in how this turned out? Check out the end-of-the-summer results here.

potato tower vegetables
by Erin @ The Impatient Gardener
9 Comments
previous post: BLACK IS NOT BLACK
next post: A COMPOST CONUNDRUM