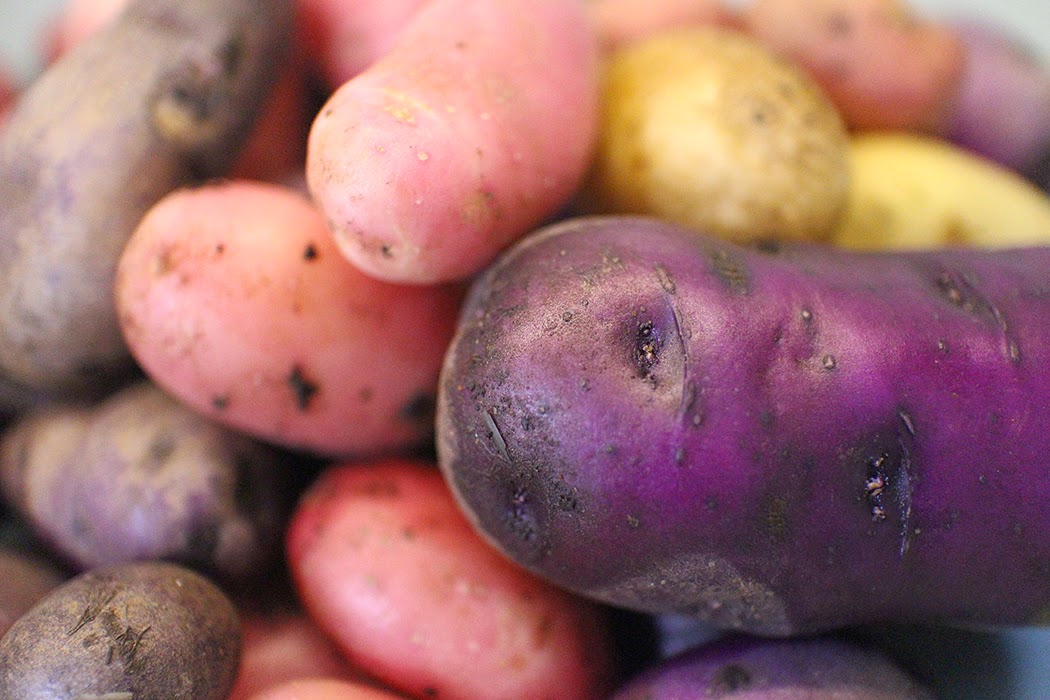 Remember the potato tower experiment? This was a method of growing potatoes I tried in part to get a crop of potatoes without using precious garden space. I also thought they would be easier to harvest.

Last weekend I attacked those towers to get a feel for how successful this experiment was.

I’m not going to keep you in suspense: it was basically a failure. (But since pictures of failures are horrible to lead with in a blog, I offer you this photo of some of the potatoes I did grow looking pretty.)

Honestly, I knew that it wasn’t going well a long time ago. The towers never were covered in foliage like they should have been. And while a few nice shoots grew for a time, the plague of slugs (plague may be dramatic but after speaking with other gardeners, I’m convinced that the mass quantities of slugs were a common problem in our area) defoliated most of what was there. By late summer there were only a few sad leaves still hanging out of the towers.

Before I get to the depressing results, let’s just take a look at the towers when they were fresh and new and full of hope.

When it came time to harvest my potatoes, I pulled out the metal stake that was supporting them and then knocked the first one over onto a tarp. And what I had was a big old mess because then I had to move all that soil and straw to the compost bin, and there was a lot of it. I got a little smarter with the second one and actually dug out the soil from the top with my hands as far as I could and then leveraged the wheelbarrow under it to catch most of the rest.

It wasn’t easy to find the potatoes. Since my harvest was small in quantity and size, I was feeling through each bit of dirt for little potatoes that might be hiding in there.

At this point one very good thing became clear. Those towers were creating some amazing soil. I pulled out several of the most enormous earthworms I’ve ever seen from them. And as far as I’m concerned, the quantity and quality of earthworms is the single best indicator of soil health there is.

After I cleaned up the potatoes, it was the moment of truth. After I added up all the costs that went into making the towers and figuring an average cost of $2.50 per pound for organic potatoes purchased at the store, I calculated that I would have needed to produce 22 pounds of potatoes to break even.

And this is all the potatoes I harvested.

And here’s the moment of truth.

Don’t get excited. The scale (an antique from Mr. Much More Patient’s grandmother, I think) might say 6.25 pounds but that’s before you subtract the 3-pound bowl.

For the math challenged, that means that I grew 3.25 pounds of potatoes. From 3 pounds of seed potatoes.

I’m not ready to say that potato towers don’t work. There were a lot of factors that contributed to my lack of success. But the fact is, other than not taking up precious space in the garden, they don’t have a lot of advantages. They were difficult to water, requiring me to spray the entire thing thoroughly. I think a PVC pipe with holes drilled in to stuck down the middle would help with watering the bottom layers, though. And they were a huge pain to harvest because cleaning up all of that soil wasn’t easy.

It’s not a total loss. First of all, I learned a little something, even if it was about what doesn’t work. And I have a whole bowl of really pretty potatoes waiting for me to make something yummy with.

experiment potato tower
by Erin @ The Impatient Gardener
14 Comments
previous post: A LAST CHECK ON THE SUMMER’S CONTAINERS
next post: LOOKING FOR A BETTER VIEW