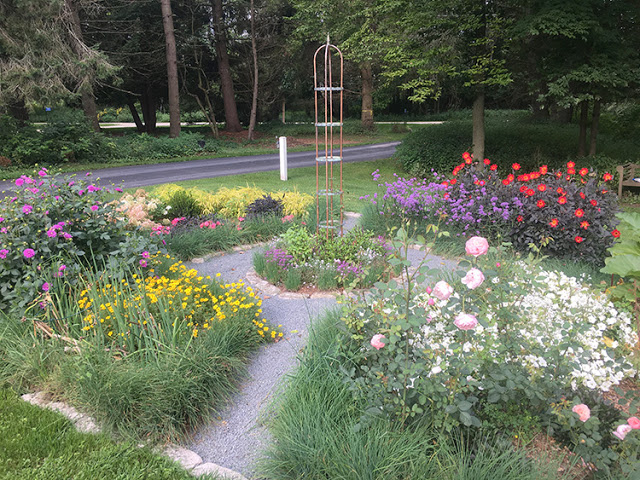 It’s a good time for reflecting on the gardening year, and I’ve learned to be a little tougher on the gardener (me) and the gardens when it comes to analyzing what worked and what didn’t. There are no perfect gardening seasons, so I try not to allow myself to make excuses because of the weather. Every year it will be something so plants and plantings need to be able to roll with the punches.

The only “new” garden I made this year was the circle garden. In fact it wasn’t new, but a complete revamp. I have to say, overall I’m thrilled with how it turned out, but there are a few misses.

So I thought I’d share with you my no-holds-barred analysis of the first year of the circle garden. Warning: This ended up pretty long, so if you just want to cut to the chase, you can watch a video about my thoughts on how the garden performed either here or at the bottom of this post.

Hardscaping wise, I’m thrilled. The cobblestones were part of the garden I designed many years ago and the outside edges didn’t change. But new paths and a lot of soil moving required that everything other than the perimeter be pulled up and replaced. I learned the lesson of landscaping fabric in the paths of the old garden, so this time I put down a crushed limestone base (sometimes called limestone screenings or paver base) and a thick layer of decorate crushed stone on top. I still see the advice that landscaping fabric be laid under gravel and after what I went through last time, I don’t get it. Anything organic that falls in that gravel eventually becomes soil (or soil-ish). Weed seeds take hold and weeds grow, often with their roots through the fabric, making them nearly impossible to pull. My hope with the paver base is that weed seeds will find it inhospitable to grow in and if they do they’ll be pullable. I can also use the weed torch on the gravel safely.

What can I say about that chive hedge? That funky little hedge that I’d been working on for years is amazing. It delineates each section of the garden without growing too high. I think it also discourages rabbits from coming in. And best of all, it has to be the most inexpensive hedge ever created. I started with two good-sized clumps of chives—divisions from my mom’s garden—several years ago. And over the years I’ve divided those clumps into smaller clumps, and divided those again, and again, and again. I’m seriously in love with my hedge. Also, I ALWAYS have chives.

I divided the garden into four quadrants, and each of those into three segments. The central boxwoods in each section have been problematic. I replanted the entire bunch after the first round seemed to have failed. I blamed my dog, who I caught peeing on them, but guess what: two more of the second round are looked really rough as well. And they happen to be in the sunniest segments. I think this might entirely my fault: not enough water. We’ll see how they do over the winter, but I’m happy they have warranties.

In each quadrant, I aimed for a foliage plant, and at least one annual that would provide color all season, along with a shrub or perennial, in some cases.

The sunniest quadrant was planted with rhubarb, roses and a combination of white Supertunias and Diamond Delight Euphorbia. I’ll admit, the rhubarb had me worried. Although its leaves can look tropical, it’s also sort of a one-of-these-things-is-not-like-the-other situation with a vegetable in the middle of the garden. I shouldn’t have been worried. It looks great and provides a much-needed bit of bold texture. The David Austin ‘The Alnwick Roses’ have been thriving and I couldn’t be happier. I hope I can get them through the winter. And the white annuals in the front have just gone nuts, and filled in the area so well.

To the east of that quadrant is perhaps the biggest disappointment. This quadrant was planted with ‘Serkin’ dahlias (I planted six and I should have done five), Goldilocks Rocks Bidens (it got a little wilder than is right for this area) and Egyptian walking onions. If you don’t know these onions, it’s worth finding them. They are a cool plant! They have fat, glaucous stems and grown bulblets on top. These weigh the stems down and the plant flops, allowing the bulblets to root and the plant to “walk.” And that’s where I went wrong. It all flopped, which if course is exactly what the plant is supposed to do, but it is a total mess. They’ll have to be moved.

At the shadiest end of the garden, which is not really that shady, I think I hit the nail on about two-thirds of the head. The Bobo Hydrangeas are out of this world. They have bloomed all summer and they are just now started to fade to brown. What a fabulous performer! And because they are covered in blooms, it’s like a massive of flowers there. The Hakonechloa ‘All Gold’ is just a tad washed out from being in a touch too much sun, but it will adapt and I love the texture of that plant. In the front I planted a beautiful impatiens called Peach Ruffles, but it was a poor choice. Impatiens doing really spread much, so I would have needed dozens of them to fill that area in. Also, again, there was more sun there than I anticipated. A Supertunia would have great.

And I’m very happy with the last quadrant, where I planted ‘HS Flame’ dahlia, an amazing single red flower with the darkest foliage, Verbena bonariensis Meteor Shower and the must have plant-it-and-forget-it Achemilla mollis (Lady’s mantle). I’d happily replant this grouping. 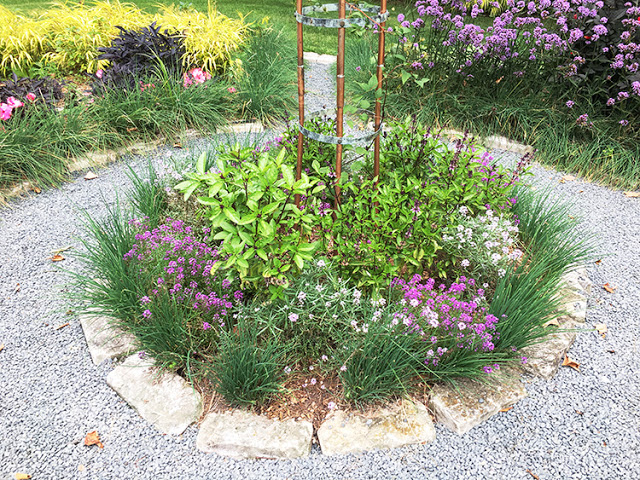 I’m declaring the center a success as well. Two types of alyssum—White Knight and Dark Knight—have grown so well that I’m wondering why I wrote that plant off years ago, and the thai basil is a nice foliage accent with pretty flowers (the only basil I allow to flower). There are two clematis planted in the center that should grow up the tuteur, but they’ve not done much in their first year, as you might expect. 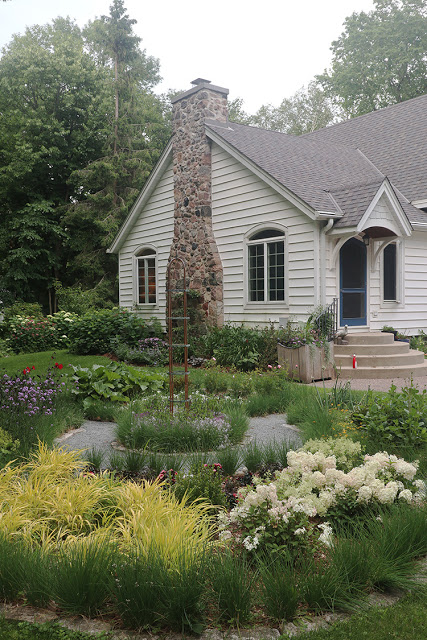 More than the individual successes and not-quite-failures in the circle garden, I have to say the garden in its entirety is having the desired effect on visitors. When people come they are immediately drawn to it and walk through its paths. I couldn’t ask for anything better.