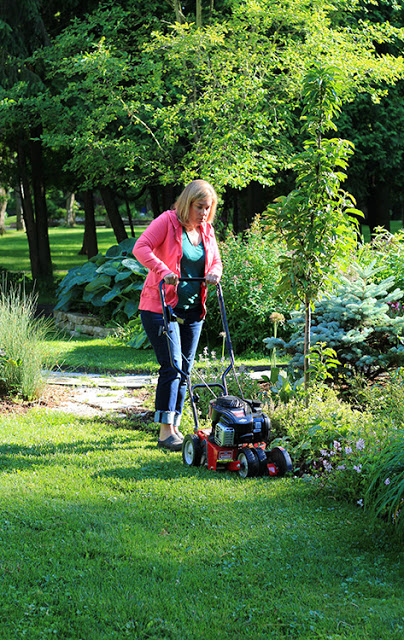 Hi friends! I just wanted to let you know that Troy-Bilt provided me with the tools I’m showing you in this post and compensated me for my time. Of course all opinions are my own.

You’ve seen these tips for quick cleanups of your house, right? Like the 5-minute thing where you know company is coming over so you quickly dump everything in a laundry basket to pick up?*

There is a gardening equivalent of this: The one thing you can do to make your garden look a million times better even if you don’t have time to do anything else. What is this magic gardening trick, you ask? Edging.

I’m a fan of natural edges cut into grass to define beds because they are the easiest to keep looking neat and tidy and they keep the focus on what’s in the garden, not what’s surrounding it. (Seriously, don’t even think about doing a rock edge without understanding the weeding frustration that comes with them.)

But they do need to be created and maintained. I’ve done this in many ways, with various levels of mechanical assistance. Most of my beds were originally defined with a flat headed spade and a lot of leg power. You can also use a half-moon edger for this. This works, but it’s tiring. Then a few years ago I got an electric edger, which helped cut the edge. It was better than using a spade, but not particularly effective. But now I’ve found what I believe will be the last edging tool I ever need: a gas-powered edger.

This is a huge time saver, easily cutting hours off the manual method and at least half the time or more off the electric edger method.

So here are three steps to making your garden look better, fast, without doing anything else.

To properly clean up a garden edge that already exists, you’re going to need to cut a little bit of grass away. Don’t worry, though, because odd are that your grass grew into your beds by that much in the last year. You can cut away as little sod as you like, so long as you are making a fresh cut or skirting just inside the existing edge. I find it hard to be precise enough to run the edge, so I think it’s actually easier to cut a fresh edge.

I used the Troy-Bilt TB554 Gas Lawn Edger for this. I like it because it’s compact enough to easily store in the garage or throw in the car (when your family finds out you have an edger you are invited over to “show them how it works” a lot), but there’s enough weight to cut into the sod without hopping around, which is what the lightweight electric edger does. There are five blade adjustments and the directions tell you to step down gradually through the blade depths, but my soil is soft enough that I can go for full depth from the get-go. 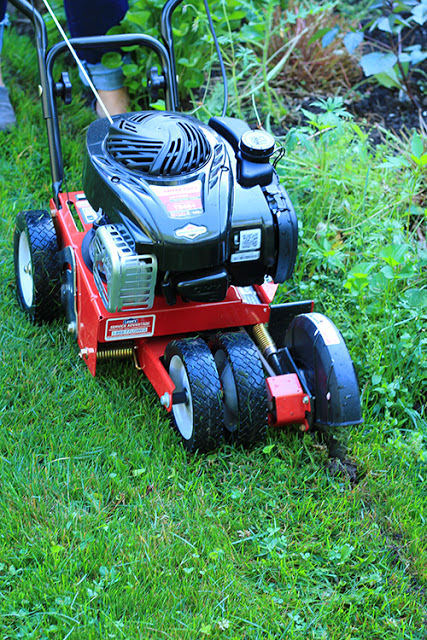 It also has two other features that are very nice but I find myself not using in this circumstance. The first is the ability to bevel the edge in either direction, which gives a really nice look. The second is great for more typical homes in cities. The back wheel drops down, allowing the machine to stay above a street curb so you can edge right along it. If you think freshly edge gardens look great, you have no idea how much a crisp lawn edge along a sidewalk, driveway or curb can raise the bar.

Depending on how hard the soil is, you may have to work the machine back and forth a bit, but again, it just cut through my sod with no problem with me walking at a slow pace. The slow pace was fine for me because I like to be careful with the direction I’m heading when edging beds.

The blade is only on one side, so the direction you have to edge in is dictated by that. It’s not a big deal, but if you’re trying to line up with another garden at the end, you may want to paint a line with spray paint to make sure you have something to follow.

The edger definitely works better when the soil is a little dryer. That’s not something we’ve had here for a long time as it seems to rain every day lately (when did Wisconsin get transported to Seattle?), but it will work on moist soil so long as it’s not sodden. Don’t even try to edge in that mess. 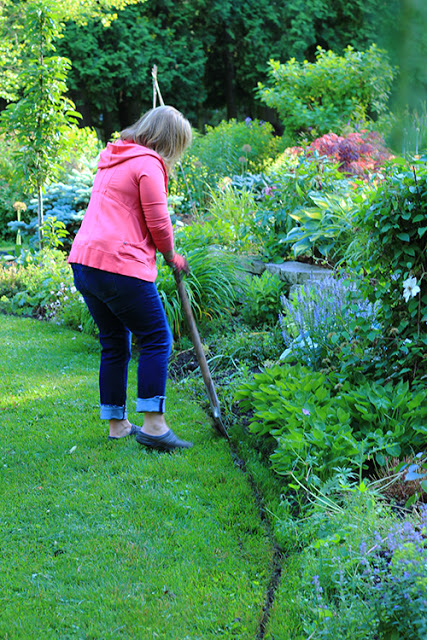 Don’t throw the spade away when you get a gas-powered edger! You still need it. After the edge is cut, go through with a spade and just pop the cut edge off. You could also do this with a trowel or soil knife on your knees, but why kneel when you can do this standing up with a spade?

I like to knock whatever soil I can off the edge before I collect it for composting. Because I was reshaping this bed slightly, I cut a wider edge in some places, so there was a little more sod to remove. 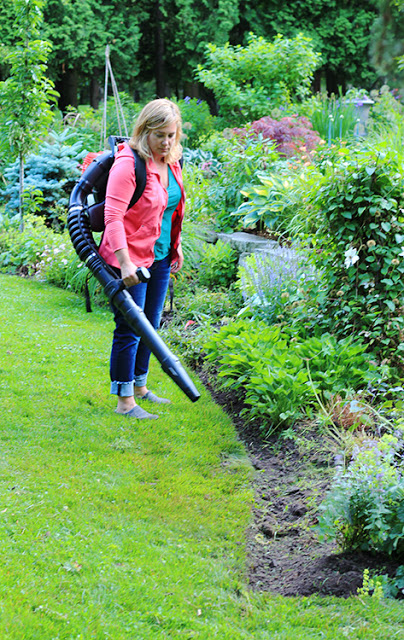 With the edge cut and the sod bits removed, all that’s left is a little cleanup. Some soil is bound to end up in the grass and some grass clippings will end up in the trench you’ve created. The easiest way to deal with this is a blower. I’m starting to amass a bit of a collection of blowers, but there are at least two I can’t live without and I think they compliment each other well.

For quick clean up, I love my battery operated Troy-Bilt TB4300 Handheld Blower. Press a button and it turns on. This is what I reach to when I’m done working in the yard for the day and I just need to do a quick run around on the patio and deck.

But bigger jobs require something else. There is a battery life issue to be concerned about with the handheld blower (about an hour with the “eco” mode and less with it on full-blast) and it can also get a little heavy when you use it that long. That’s the same issue you’ll have with a traditional gas-powered mower. That’s where a backpack blower comes in handy. All the weight is carried on your back (and it’s amazing how light it feels back there compared to waving your wrist all over the place), and the blower arm is very robot/jet-pack inspired. Basically it feels like you have a giant joystick in your hand. We have the Troy-Bilt TB4BP EC Backpack Gas Leaf Blower and I love it for bigger jobs. Mr. Much More Patient, who is a bit more than a foot taller than I am tells me he wishes it had a longer blower tube because he feels like it’s too short for find-tuning blowing direction when he’s using it.

After edging, I just blow all the bits back into place or out of the way. If you’re edging along a sidewalk this will be even more important because some dirt is going to spray around during the edging process and you’ll want to clean that up. 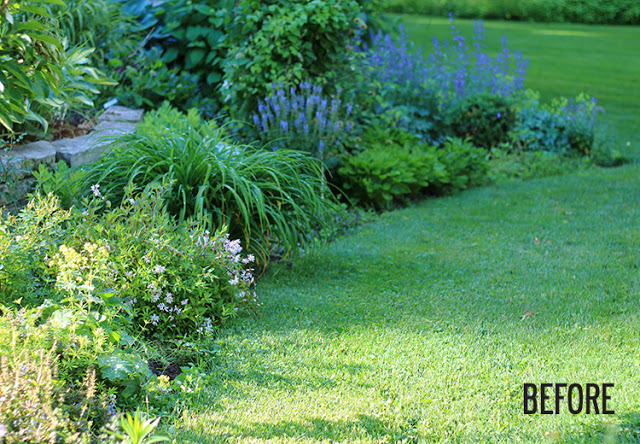 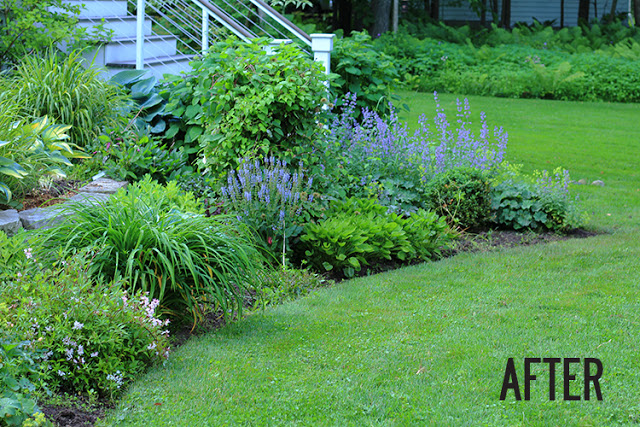 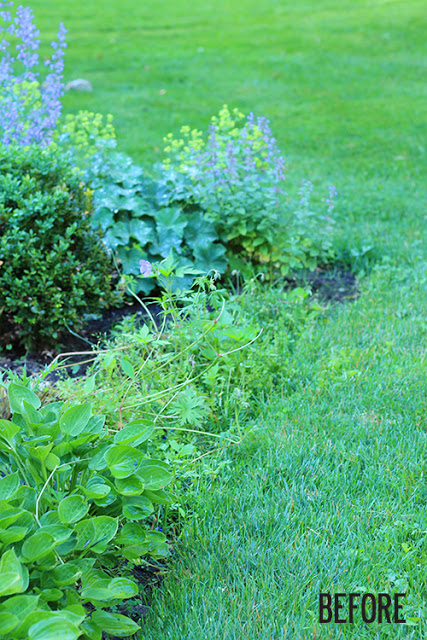 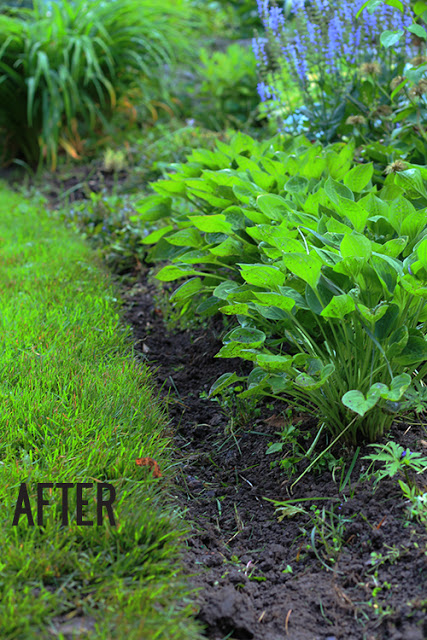 And that’s it. Check out the difference in the before and after. I did nothing else other than edge. In some areas a chunk of weeds popped up when I went through with the spade, but as you can see there are plenty more weeds in there. If I had time, I could go through and pull or hoe out those weeds and then mulch the beds and this would be amazing looking. Note: Don’t fill the entire trench with mulch. You’ll lose that crisp edge and just create a place for grass and weeds to creep in.

I get away with edging all my beds once a year and then neatening them up with a long-handled shears a couple times. Edging again fall would be even better, but sometimes you just don’t have time for that. Just like sometimes you don’t have time to weed the garden and deadhead flowers before your garden party. Edge it … they’ll never notice.

*Note about the laundry basket thing: I did this once and literally a year later I found a laundry basket shoved in the basement full of things I had been looking for since they went in that basket, so I don’t actually recommend this.

blower edge garden troy-bilt
by Erin @ The Impatient Gardener
6 Comments
previous post: HOW THIS YEAR’S CONTAINERS CAME TOGETHER
next post: HOW DOES YOUR GARDEN GROW?