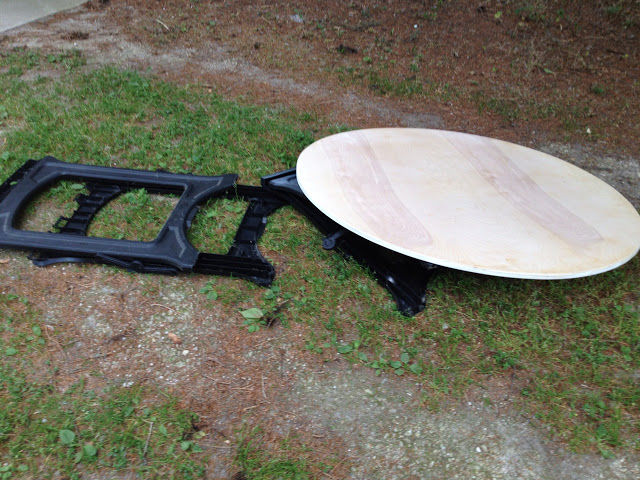 Here are a few things I’ve learned in the last week:

1. Living near a large, damn near freezing lake (seriously the water temperature off our house is 56 degrees today), has its benefits when it’s amazing hot outside (but it’s still plenty hot).
2. Detroit is not a good place to get stuck overnight whilst flying (in hindsight, I should have foregone the airline-provided hotel and just stayed in the airport. It was much nicer).
3. I am officially the worst blogger of before-and-afters ever. In my defense, however, that’s because I’m so anxious to get going on a project that I forget to take a picture of the before.

That brings me to a little project I pulled off a week or two ago with not a lot of effort. Normally I’d just skip telling you about it giving the lack of before and during pictures, but it actually turned out pretty neat so I’m going to do it anyway. Plus, it’s nothing hard it doesn’t require a lot of explanation.

Three or so year ago we bought a patio set that included a tiled table. Because we’re a little light on storage space, we’ve been leaving it out all winter, usually covered by a tarp. Apparently that’s not so good for a tile-topped table because the tiles started popping off a couple years ago. We just glued them back on but then they’d pop off again. This year the table just started disintegrating to the point where we could pull the tiles off by hand.

I really didn’t feel like looking for a new patio set in the beginning of summer (when selection is not at its best and prices are are their highest), nor was that in this year’s budget, so we needed to come up with an interim solution. We first tried to take all the tiles off and hopefully just sand the top, but the top was made up of some kind of plasticlike material that couldn’t be messed with.

Instead, we bought a half sheet of plywood and had it cut in half to the 48-inch width of the original table. Mr. Much More Patient took the jigsaw to it to get it back into a circular shape and then sanded the edges to round them a bit. We used birch plywood, but they were all pretty much the same price and I think anything would have worked for this purpose.

With the shape defined, the finishing department (that would be me) took over. I sanded the entire thing, both sides with 120-grit then 220-grit sandpaper and primed both sides. This was another spray-paint only project for me (mostly to save time, but also some money because I certainly didn’t need an entire quart of paint for this project). The idea with priming the underside of the table was to give it a bit more protection from the elements. I used a spray primer by BIN, which is my preferred brand.

We then attached it to the table base, mostly because Mr. Much More Patient was leaving for a couple weeks and I wanted him to do it before he left. It could have been done at any time in the process after the bottom was primed.

With it attached to the table base I no longer had to rely on the crappy plastic sawbucks, which as you can see in the picture below, fell over with the top on them (the good sawbucks are in continued use with the front screen door, which, if you can believe, I painted backwards about two months ago and is still sitting in the basement waiting to be finished).

I did about four or five coats of white spray paint on the entire top. I really wanted to coat it well given that the table top could use all the protection it could get. Then I taped off some stripes quickly (and if you look closely you can see they weren’t exactly straight, but the priority here was getting a functioning table back) and gave it a full can’s worth of spraying with Rustoleum’s Stone Gray. 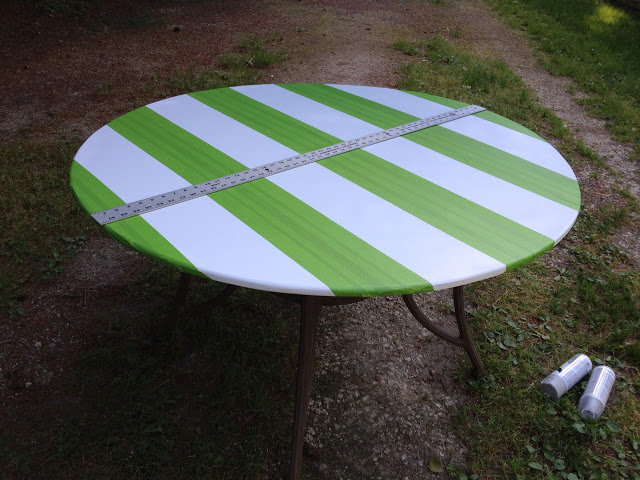 I waited the required 48 hours (that’s the thing with spray paint … you either have to recoat it within an hour or so or wait until it’s completely dry in about two days) and then covered in a clear protective spray. Again, my intention is to protect it from the elements as best I could.

When that dried it was a little rough, so I did a very fine wet sanding (where you literally get the sandpaper good and wet) with 1500-grit sandpaper (which I assume we have around for various boat-related projects) just to get it nice and smooth without taking off much of the clear lacquer. 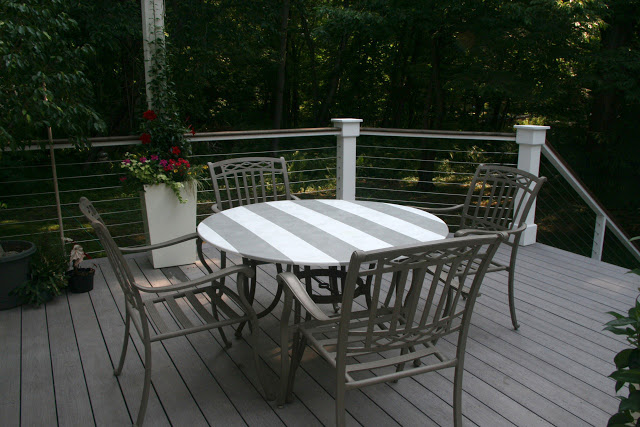 I actually like the new look of the table much more than the old look. I know it won’t last very long and I have to wipe it off a lot because the white shows every speck of dirt, but it serves it’s purpose beautifully. All told we probably spent about $40 on this (if you divide the cost of the plywood since we still have half a sheet for another project), which is much less than a new table would have cost. I’m not sure if we’ll get more than this summer out of it, but we’ll certainly enjoy it plenty this year.

before and after deck paint
by Erin @ The Impatient Gardener
1 Comment
previous post: Show-offs
next post: Don’t try to understand the deer (and how to keep them from eating your garden)