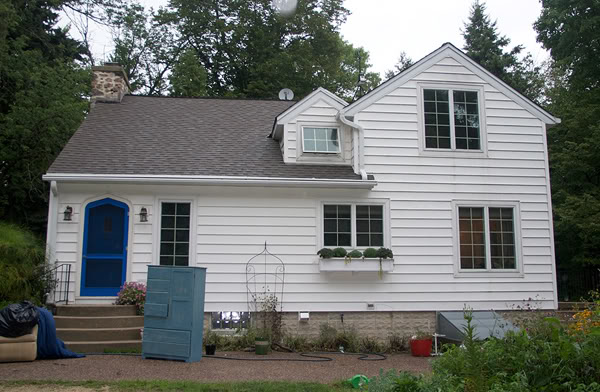 So I mentioned that I ripped out all of the Russian sage in the little bed between the south side of the house and the patio and that my plan is to replace it with more Russian sage. Sounds counterintuitive, doesn’t it?

Here’s the deal. The area in question, about a 2-foot-wide patch of dirt that runs from the front door to along the south side of our white house to the stairs to the back door, is a very inhospitable place to grow something. The sun beats down on it thanks to the southern exposure. Rain is limited because the area is mostly covered by the eaves of the house. The white siding reflects even more light.

But I need to grow something there. Our foundation sits about four feet out of the ground because we’re so close to the water table. Therefore the rather ugly block foundation is fully visible all around the house. Planting something in that area makes you look beyond that ugliness.

Because it’s a small area, I don’t want to plant multiple varieties of plants. I want it to be simple and pretty, and not compete with the front door, the window box or the nearby perennial garden. I have a couple of clematis planted in it for some vertical interest (although whether they survived the construction remains to be seen) and to break it up a little. Boxwood would probably work in that area, but I think that’s just too formal for that part of the house.

The Russian sage that was there when we bought the house had a lot of good things going for it. It was certainly mature, and the blue color when in bloom was beautiful against the white of the house. But it had plenty of disadvantages too. It was too leggy and even though I pruned it pretty hard a couple times during the summer, it would end up flopping all over the patio. In order to be able to shovel the patio in the winter, I’d have to cut it back in fall, which isn’t great for plants and leaves the foundation exposed all winter. It would be much prettier to have something, even the skeleton of a deciduous plant, to break up that line during the winter.

The variety that had been planted there was the common kind of Russian sage: Perovskia atriplicifolia. It’s a tough plant, perfect for the kind of conditions this little microclimate provides (and also for island beds on boulevards, etc., which is why you often see it planted in the median) and it’s lovely scent makes it almost impervious to animal nibbling. It grows to about four feet.

There is another cultivar of Russian sage that incorporates all the hardiness of the original in a smaller package: Perovski ‘Little Spire.’ Depending on what source you consult (don’t you hate when the size information for a plant varies so much?) it shoul get about 2 feet wide by 2 or 3 feet tall. I’m thinking 3 feet is more likely in my area because I have almost perfect growing conditions for it: sun and great drainage. The thing I like most about is its unlikeliness of flopping, which was my main complaint with the original Russian sage.

Now I just need to find a source that will have the dozen or so plants I’ll need to fill up this area. If all goes well, I’d like ‘Little Spire’ to be the first plants I put in the ground this year.

garden russian sage
by Erin @ The Impatient Gardener
2 Comments
previous post: Cue the angel chorus; there is hope
next post: A sunny before and after (+ a sneak peak)