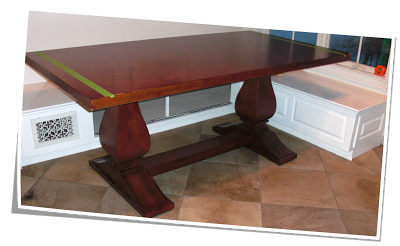 R  emember how I got this slightly damaged table for a great deal at the Restoration Hardware outlet? Well, it’s been hanging out in our basement waiting for the kitchen project to get on track.

We brought it upstairs and set it up.

You might not be able to tell from this picture (ignore the green tape), but there’s one little problem: It’s too long. You can’t easily get in and out of the banquette on the left side. Of course we knew from the beginning that we’d have to cut some of it off because we purchased it with one smushed in corner (and since it’s a maple veneer on top of MDF, there’s no fixing that).
So you might think, as I did, oh, simple fix … just cut equally from each end. But alas, you would be, as I was, sorrily mistaken. Because you see, the ends are really great places to sit. There is one foot of table overhang beyond the legs. And the second you make that measurement smaller, your legs are crammed against the table and you lose two places to eat. Isn’t this the way all projects go? Any time you start thinking they are simple, be prepared for a big ol’ wrench to be thrown in your plan.
This wrench required that “stretcher bar” part of the trestle to be shortened 9 inches, which my hubby did. Don’t ask me to tell you how it did it because all I know is that he took up to his dad’s workshop and used a variety of tools including a table saw, drill press and something call a forstner bit (which I like to call a forceps bit just to irritate him).
We then had to cut the table off. I was really nervous about this because if you’ve ever tried to cut one of those particle board shelf boards, you know how much they tend to chip. We got the finest blade our el cheapo circular saw could handle. Unforunately that was only 40 teeth (everything we read online suggested 60 or 80 teeth), but the guy at the hardware store thought it would be fine. He did give us one good tip though: cut the table upside down because of the way the saw turns.
We measured about 10 times (forget the adage measure twice, cut once, we were going to measure until we are DARN sure we had it right), then clamped on a metal ruler straight edge thing (I’m sure there’s a real name for this tool, but couldn’t tell you what it was) to serve as a guide for the saw. Then we cut off half the amount we needed. Because we had to move one leg in, we just cut from one side of the table, but we only cut half the amount to make sure the blade was going to work. And it did! There was one tiny little chip at the end though, so on our second cut—the REAL cut—we taped the area where the veneer would be cut. It worked like a charm … a perfect cut! 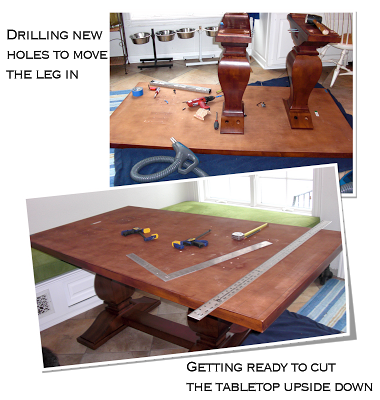 We’ll still have to re-veneer the cut but we have to find some edge banding first. Stay tuned for that part of the project.
Here’s the freshly cut end (on the still upside-down tabletop). 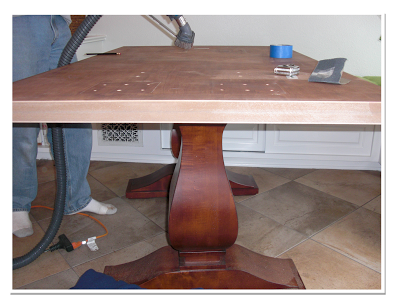 The new length of the table is great. You can now comfortably get in and out of either side of the banquette and we figure we can fit seven adults and even more if we’re squeezing or you throw a few kiddos in the mix.
There, isn’t that better? 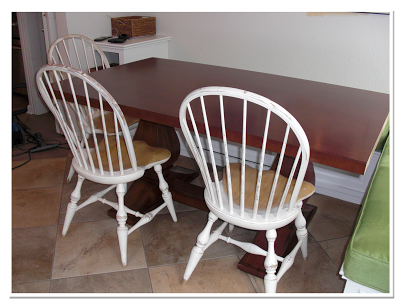 The chairs are leftover from the old table but I think they’ll work out just fine, because as you might have guessed … I’m not done with this table yet. Stay tuned.
If you want to see where this little mini kitchen re-do began, click here.
by Erin @ The Impatient Gardener
6 Comments
previous post: The lazy gardener’s guide to seed selection
next post: Re-doing the kitchen: Part 3