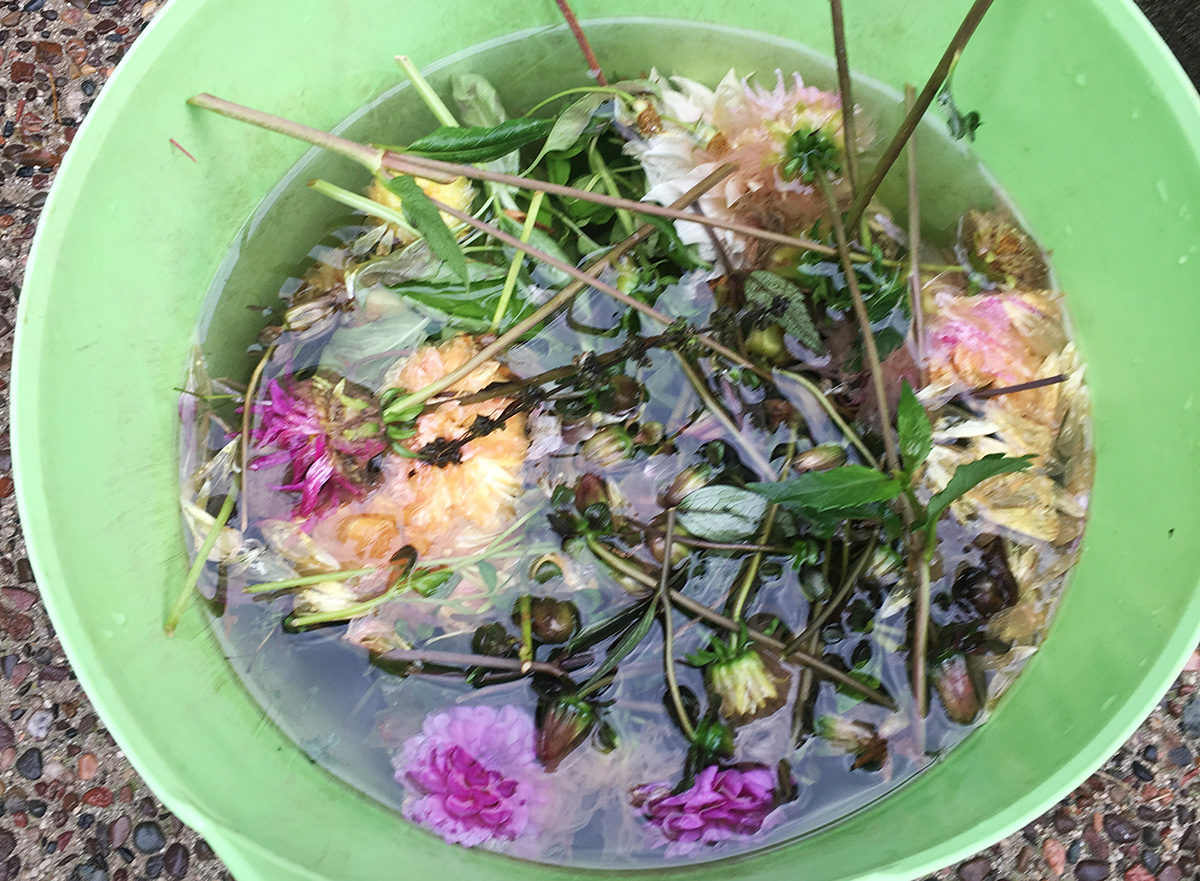 I remember when I would enjoy laying in bed listening to a rollicking summer storm. The rain pounding on the roof above my head, the rumble of thunder, the waves crashing on the nearby shore were all sounds I enjoyed listening to until they lulled me to sleep.

Apparently my brain is now permanently in garden mode, because Sunday night these same sounds kept me awake, staring at the radar loop on my iPad screen, imagining everything that was happening outside. Certainly part of this was hearing the stories and seeing photos from friends’ gardens in the Madison area, which just last week was hit with a damaging and deadly deluge. 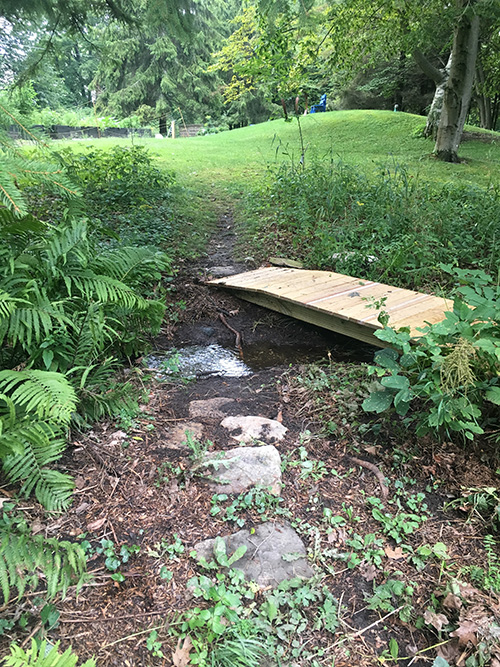 The creek that runs through the middle of our property jumped its banks, depositing a lot of debris in the garden and moving a very heavy bridge out of the way.

As I sat in bed here’s what went through my head:

Most of what I was imagining while I was absolutely not sleeping was right on. A quick survey Monday morning revealed that the Nicotiana definitely did flop to an extent that may be unrecoverable. Some of the dahlia stems broke under the weight of sodden, blousy, blooms. And yes, that wheelbarrow was not just left out, but was now full of water along with a bag of manure (ew) and my tools were trapped underwater at the bottom. 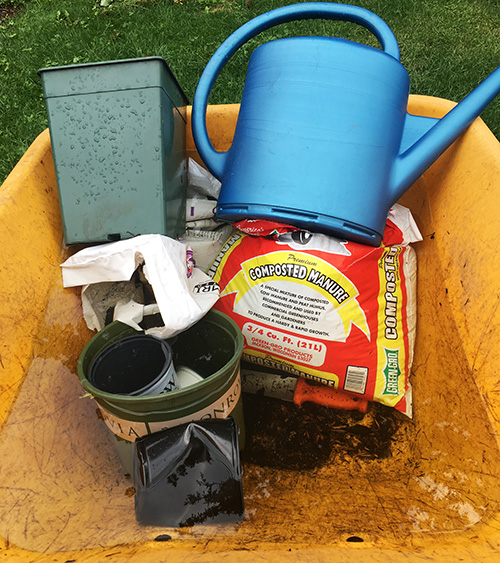 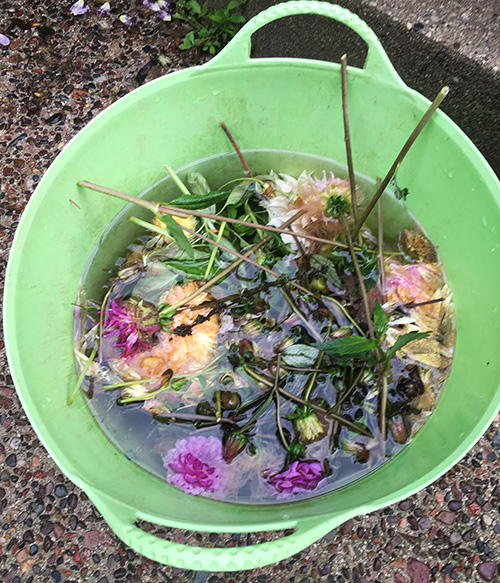 My deadheading bucket became a type of flower stew. 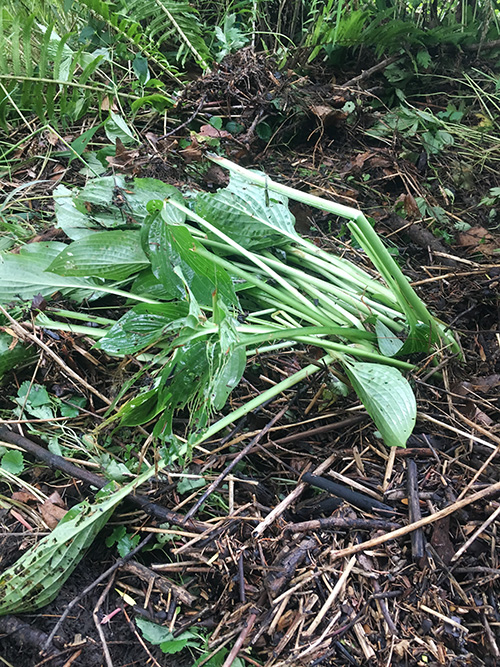 A poor hosta near the creek was completely flattened and ripped apart. 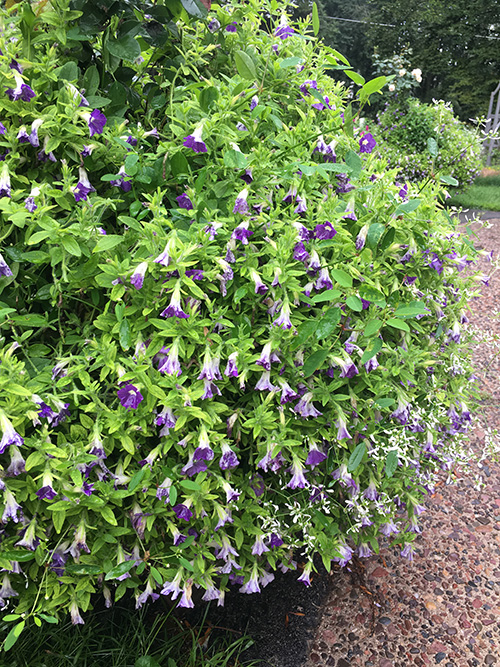 The petunias in the containers are all a sad, droopy mess.

I don’t have a proper rain gauge (I must remedy that), but between the amount of water in a previously empty bucket and weather service reports, my guess is that we had 7 to 8 inches of rain that night (since then we had another 2 inches Monday night and storms are rolling through as I publish this Tuesday night). Amazingly the basement is only damp and the creek didn’t appear to have burst over its banks. The bad news is that more storms are forecast for the rest of the week. There’s not much to be done about it except to put my tools away, turn off the watering timers and try to get some sleep.

flooding rain
by Erin @ The Impatient Gardener
11 Comments
previous post: Dahlias are the stars of summer
next post: Friday Finds: Moments in the garden