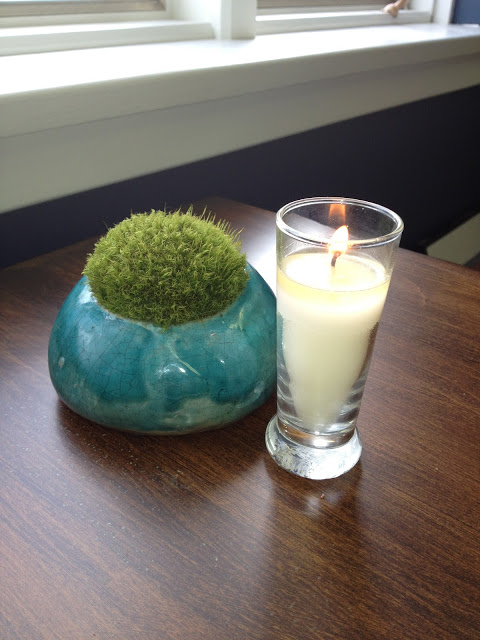 Does that sound a little wrong? Because I do.

I couldn’t blog about it because it would have ruined the Christmas surprise, I bought three Moss Rocks for Christmas gifts this year. I ordered them well in advance because I wanted to make sure I’d get them in plenty of time. My mom, sister-in-law and I (yes, I buy gifts for myself; and yes, sometimes I wrap them up and put them under the tree) all got “Cobble” size (medium) Moss Rocks for Christmas. I bought  them in lichen, toadstool and raindrop (sagey green, off white and turquoise) and decided who should get each color when they arrived.

I have to say, these things are just the cutest little buggers. It’s so weird, but everyone’s first reaction when they see them is to say “Awwwww.” And then the next thing they do is pet them. I’m serious. Your first reaction is to reach out and fluff the little guy’s fuzzy head.

I brought mine to work and keep it on my desk so I can pet it throughout the day. I’m a toucher, much to the dismay of everyone I work with. I absolutely must be fiddling or touching or playing with something all the time. I don’t even realize I’m doing it, actually. I will pick up someone’s stapler while I’m talking with them and start dismantling it in the middle of a conversation. I completely and accidentally invade people’s person space by picking up something on their desk. I usually carry a pen with me everywhere I go, which helps because I fiddle with my pen instead of something off some random victim’s desk. It’s weird. It might even be a little OCD, but who doesn’t have a little dose of OCD in them?

Anyway, the Moss Rock seems to help a bit with those tendencies. Plus it’s helping me do better at keeping my desk clean, because it looks so much cuter all by itself with its candle friend when it’s not covered with a pile of paper.

Just to clarify, Moss Rocks didn’t send me anything or ask me to do anything, and frankly has no idea I’m writing this post. I just really love the Moss Rocks I bought. Obviously … since I’ve admitted to sort of molesting them. Although I’m wondering if maybe I have a problem with that (see previous offense here). Is there a 12-step program for plant molesters?