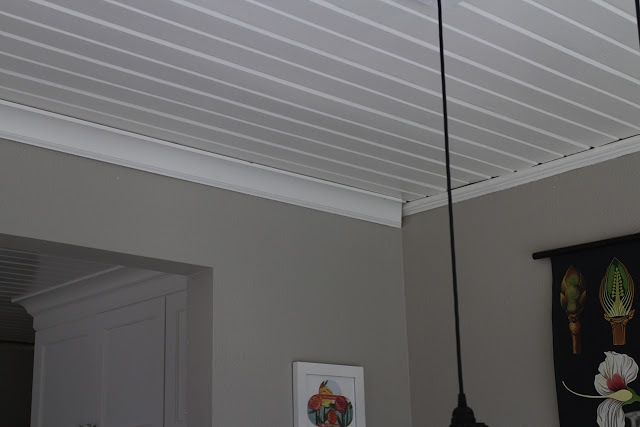 Maybe I got too confident about our DIY ability. After all, I’ve jumped in with both feet to projects I had no idea would work, we installed our bedroom floors, I laid a huge stone path through our yard and built stacked-stone retaining walls and I’ve even learned how to do some electrical work. Our theory on when to do things ourselves and when to let the pros do the work usually involves deciding if we can do as good (or better, which is often the case) of a job as they can for less money and a realistic amount of time.

So it is humbling to tell you that we have suffered our first official DIY failure with a project that is frequently DIY’d: crown molding.

Our cabinet maker put the crown molding around the top of the cabinets but we told him (with an air of overconfidence) that we’d take care of putting it up in the rest of the room. We read a lot of online tutorials, including this one at Young House Love and another at Sawdust and Embryos. We even bought the Kreg Crown Pro jig (which is now shorter thanks to a misfire with the saw).

After a lot of reviewing of tutorials and reading the jig instructions, we started measuring and cutting. We have two sides to the kitchen, which is divided by a beam down the middle, so we started with the “easy” side where it would be just four pieces of molding and four inside corners. The other side involves a lot more corners because of the cabinets and coping instead of mitered corners.

First we did some sample cuts and spent about an hour trying to wrap our brains around the upside down, backwards and inside out angles involved in crown molding. Once we FINALLY got that down (we had the jig set to the wrong spring angle), we cut. I was operating the saw. Unfortunately I assumed that pushing the bottom part all the way one way or the other would cut a 45-degree angle. Unfortunately I didn’t notice that the saw actually went PAST 45 degrees, to about 47 or 48 degrees. I did notice this after we made about three or four cuts. We put up two pieces of crown, attached but just a couple brad nails in case they needed adjusting, and called it quits for the weekend (this was two weekends ago).

When we picked it up this past weekend, we discovered that the two pieces we put up would both have to be recut (I thought I might have screwed up the setting on the saw but we weren’t sure). Then there was the issue of adjusting it to fit with its neighbor piece. I suspect that in a house with straight walls would not be as challenging to install crown molding in.

I’m certain we could have figured it out had we persevered. We might have needed another piece of crown molding, but we would have gotten it eventually. But at some point we realized this was in no way fun. And there are times when the phrase “Life’s too short …” comes into play. At some point your frame of mind and your precious weekend time becomes more important than whatever it will cost to pay someone to do this for us.

So we’ve got a few people to call to bail us out and we’ll pay them probably more than we should. But in the end we’ll be happier people for having done that. And that’s worth its weight in gold.

Because as Kenny Rogers famously sung, sometimes you just have to know when to walk away. And I’m OK with that.