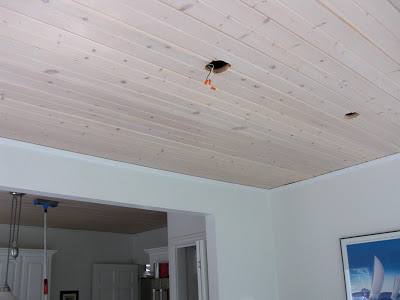 Professional painters amaze me. They are so neat. So fast. So not covered in paint when they are done and tracking it all over the house. I’m none of those things, yet I sort of like painting. And I’ve always sort of wondered about hiring a professional painter. My theory on it was that unless you have a massive area to paint (new house) or an area that requires special equipment to paint (the cathedral ceilings in the living room), painting is a DIY project.

I hereby take that back.

For weeks now I have been putting off painting the ceiling in the kitchen. I think part of me knew how bad it was going to be. But I get these ideas under my skin and I get consumed by them until they are done and crossed off the list. So this weekend was ceiling weekend.

The before ceiling, complete with two holes in the ceiling: where the fan was and where the light is going to be. In the background you can see that we’re using the sanding pole to hold up the patch we put in the ceiling.

Before we could start thinking about painting we had some patching to do. Clearly, the people who put the lights in the kitchen, who knows how many owners before us, they did not have furniture in the room when they decided where the lights were going to go. Both lights (in the eating/entry area and the working area) were smack dab in the middle of the space, with no regard for where the island or a table would be. We replaced the ugly flourescent square light for a pendant over the island several years ago, but rather than tackle patching the wooden ceiling, we just stuck a piece of wood over it. It was fine, as long as you didn’t actually look at the ceiling. I recently decided to nix the ceiling fan in the other part of the kitchen for lights that are actually OVER the table as well. This requires more holes in the ceiling and a bit of electrical work on the part of my husband.

Apparently said electrical work takes more than a few minutes, as I had planned, because my plan was to have the ceiling patched and with a coat of primer on it by noon Saturday. The husband-turned-electrician was apparently interested in doing it correctly because of “the danger of fire” and random details like that. 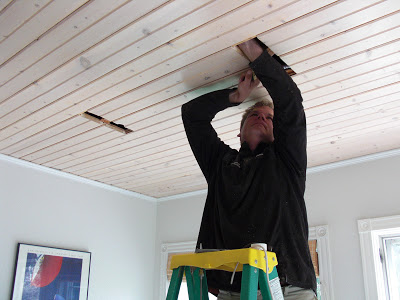 Um, honey … are the holes supposed to be getting bigger?

Long story short, I didn’t get to priming until 2:45 Sunday afternoon. Well, that’s not entirely true. On Saturday I read the back of the can of primer (water-based). It said I had to spot treat knots with BIN primer, which I had a spray can of. When I was at the hardware store I pictured our kitchen ceiling with a few knots here and there. When I looked at it a day later with an eye to priming, I realized it’s actually knotty pine. In other words, it’s covered in knots. I started spraying the knots and then realized that was a waste of time. I returned the nice, easy-to-clean-up, non-noxious-fume primer for a can of BIN, which has more warnings on it than a jug of kerosene. 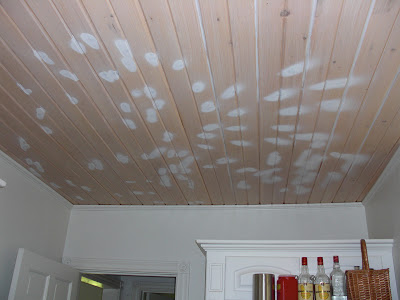 You can see why I gave up on spot priming the knots.

So most ceilings are a drag to paint (well, I’m assuming this because I’ve never painted one before) because you have to cut in around the edges, then roll the rest. But because this ceiling is wood boards I had to cut in each individual board. Oh my aching shoulder. 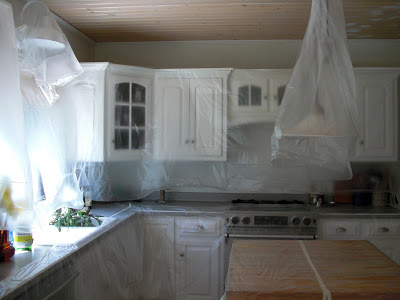 Doesn’t this remind you of the scary scene from E.T.?

I also skimped on drop cloths. I bought one and planned on moving it around as necessary. It cost $2.50 (for $7.50 more I could have covered the entire floor). Of course I got some paint on it, then I stepped in that paint, then I tracked that paint on the uncovered floor, then I flipped the drop cloth over while moving it, and by the time the husband-turned-grocery-getter returned from the store I was trapped in a corner, covered in paint and on the verge of a breakdown. Thank goodness he fetched me a pair of socks to put on (since by this time my shoes and my feet were covered in paint and I was afraid to walk anywhere), and painted the last half of the ceiling (with significantly less mess than I would have caused).

So here’s where I wish I could show you a great picture of the finished product. I can’t. By the time I got that primer finished (which took about 3 hours in our 250 square foot kitchen) I was done. The paint will have to wait for another day. Or maybe another painter. Because let me tell you, I’m done with ceilings. For good. 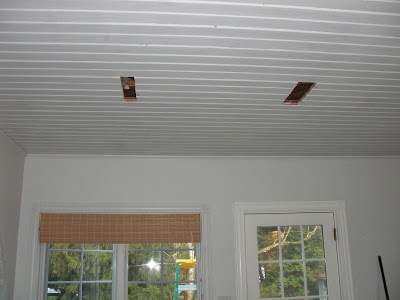 OK, so the holes are still there, but at least there’s primer on the ceiling. 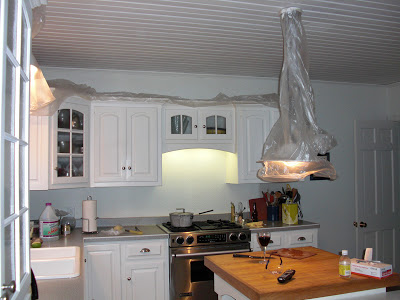 Primer on this side of the kitchen. I figure if I keep the plastic up I’ll be more likely to get the paint on. Or hire a painter.
by Erin @ The Impatient Gardener
4 Comments
previous post: First plant delivery of spring!
next post: How to plant a rockin’ window box