Whew … what a weekend. We had our first nice day of the year yesterday and it finally felt like summer. The screens are on the windows, the breeze was blowing through the house and the deck was the perfect temperature for a cocktail after a long day. Welcome back, summer. We’re happy to have you!

I had an appointment in the afternoon on Friday so I took the morning off of work as well and zoomed around the garden. I got some edging finished, spread some more compost, did some more weeding, planted a few containers at the family cottage and generally just enjoyed a great morning in the garden. I wish I could have more of those. Coffee while gardening is almost as good as beer while gardening.

I had a few other things to attend to Saturday and it was raining anyway, so I didn’t get in the garden until about 4 p.m. Fortunately Mr. Much More Patient begrudgingly helped move compost so with him hauling and me spreading, it took only about 45 minutes to do what would have taken me two hours alone. There are only about two more wheelbarrows full left from the pile of six yards of compost I had delivered more than a month ago. It was a ton of work to move all that, but I think the occasional topdressing of the beds in compost does so much good.

Sunday I volunteered at a garden tour at a private garden on a 120-acre property as a “plant expert”(please note the use of the quotation marks; it was not a label I would have given myself). It was an absolutely beautiful day with a nice breeze and 75- to 80-degree temperatures. There were so many nice people (and a few not-so-nice) people who came to tour the garden. I found it so interesting to have the complete plant list for the gardens, which must have well over 500 different plants on it.

The head gardener for the property was on hand to answer questions and I think he was cringing a little bit to see so many people in the garden, but he had to have been happy with the lovely comments people offered. I can’t even imagine how many hours the staff must have put in preparing for this event. I know I would be absolutely frantic if any group toured my garden, much less more than 1,000 people. This garden was open to the public just one other time two years ago, during the Garden Conservancy Tour, and I toured it then. That time the tour was in August, so it was so interesting to see how different the garden looked at a different time of year.

Since it was a private residence, they requested that people not take photos. The photos you see here are courtesy of the garden caretakers via the event website and Facebook page.

The more manicured garden areas surround the main house and the stunning circle garden (an old horse corral) is set up in an almost labyrinth-type pattern, with pea gravel paths and a fish pool in the middle. The plant list for the circle garden was six pages in about 9-point type. Other than a few very unusual plants, nothing is marked with a tag. Remember, this is personal garden, not a botanical or public garden, so if they owners and gardeners don’t want plant tags cluttering up the garden, that’s their call.

But here’s the interesting thing. The gardeners can’t necessarily tell you off the top of their heads what a plant is either. They know their behavior but without looking at the plant list they might not be able to tell you what it is and they quite likely may not be able to tell you the cultivar. I find this refreshing, to be honest. It’s sort of seat-of-your pants gardening. I like that. Plus it would be next to impossible for anyone to know all of those plants off the top of their head.

These are the lessons this garden offers:

1. Plant in masses. Under one small standardized hydrangea they had planted large clumps of ‘Caesar’s Brother’ Siberian iris. There were probably 15 clumps at least and almost everyone remarked at how beautiful they were. I don’t think the effect would have been nearly as dramatic if there had only been five clumps.

2. Groundcovers can be beautiful all on their own. In the aptly named rock garden ground-hugging groundcovers (blue star creeper, creeping thyme, Cerastium tormentosum (Snow in Summer), many kinds of sedum, among others) were planted in puddles. There was no star, just a patchwork quilt of groundcovers. The effect was serene and interesting. 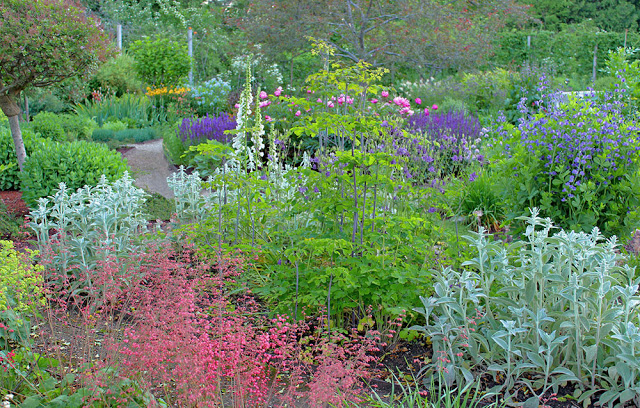 3. You don’t have to have the latest and greatest cultivar to have an interesting planting. Because these are long established gardens, you won’t necessarily find the lastest improved-upon perennial. I’m sure that the gardeners have experimented plenty to find plants that work best for them, but I think the lesson here is that you don’t have to necessarily spend $12 on a newly introduced plant when another “older” cultivar of the same plant might work just as well.
4. Stake in new ways. One of the most charming things in the garden (and one that so many people commented on) was the willow peony rings and “cages” the gardeners made. Instead of being something that is meant to be hidden, the willow peony rings (just braided willow in a ring with some support sticks that I believe were wire-tied together) were as beautiful and interesting as the plants themselves. They also made tuteurs or obelisks out of willow to support climbers in containers as well as a HUGE recta purpurea clematis. I thought this was a great way to grow a small-flowering clematis, giving it more of a shrub appearance than a vine. 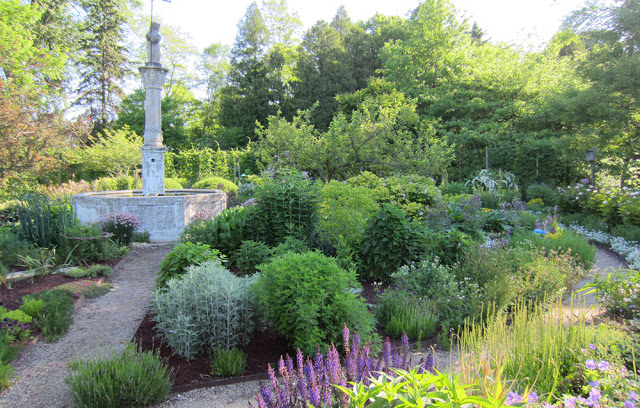 5. Don’t feel like you have to incorporate the standards if you don’t want to. There were very few hostas or roses on the property, yet these are some of the most commonly grown perennials. Don’t be pressured to grow something you don’t want to just because it seems like a garden may be “incomplete” without it.
garden lessons garden tour
by Erin @ The Impatient Gardener
6 Comments
previous post: The Garden Appreciation Society Week 5
next post: The Garden Appreciation Society Week 6 — Link up!