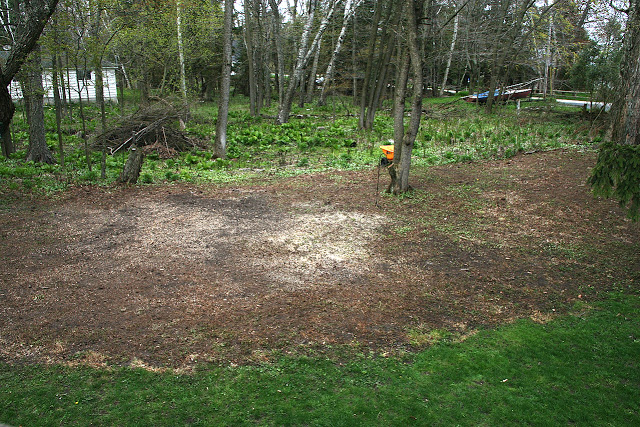 We’re coming up on a decade of living in this house during which I’ve added or rejuvenated more than a few garden beds. I seem to work in cycles of creating a new area to garden in about every other year. But never, in all that time have I tried to create more grass.

We have a standing rule around here that I’m in charge of gardens and Mr. Much More Patient is in charge of grass. It’s been a frustrating role for him because we are so conditioned to believe that if you want a beautiful lawn you need to apply an almost constant stream of chemicals to it, and well, I don’t allow that. Mr. MMP has gotten on the organic bandwagon now, and not just because I made him, but it’s true that it makes growing a lush lawn more challenging at times. But really, we have really sandy soil and two very large dogs so we’re never going to have a perfect lawn anyway. I say put in more gardens and you won’t notice the lawn!

We have 1.3 acres, which, when we bought our house, I thought sounded like an estate but now I’d be happy with five times that much land. At least 50% of that is wooded, so we struggle with balancing woods and yard. Over the last 10 years the woods has been encroaching on our yard, mostly because tree limbs started sagging making it difficult to mow under them and then creeping Charlie took over. The situation got worse when we added the deck onto the back of the house, taking up a good amount our yard.

Because we’re in an “off” year for garden creation (last year we put in the path and the new terraced beds along the deck), we’re dedicating some of the gardening budget (by the way, I use the word “budget” loosely, as I make it a point to never add up how much I spend on plants; I recommend the same strategy for costs related to pets) to reclaiming a bit of yard, cleaning up some poor performing trees and installing some new screening trees.

The process has a couple of phases and started with trying to kill the weeds in the area we’re going to (hopefully) grow grass. I suspect this area actually once was grass because the only thing growing there was weeds and there seems to be a clear line where the Ostrich ferns that fill our woods stop. Normally I would kill a large area of vegetation by smothering it with newspaper and then building from there. This is how I’ve started most of the new gardens I’ve made. But that is a long process and one I’ve always done at least six months before I plant something. And as you know, I’m nothing if not impatient. I want grass now. I am not a fan of Round-up for various reasons including its potential environmental damage and the fact that buying it supports its manufacturer Monsanto, which has the most despicable business practices I’ve ever heard of. I’m particularly sensitive to the first issue because of our proximity to Lake Michigan and the fact that we have a creek just feet away from this area that feed straight into the lake a few hundred feet away.

That didn’t leave me with a lot of weed-killing options so I got creative. I started by using my new weed torch on the whole area. It took a long time because the torch I have is really meant for spot treating weeds, rather than killing whole areas. Then I followed up by spraying vinegar (the regular household stuff you by in the grocery store at full strength) with the pump sprayer. After it I was happy to see some serious dead weeds. We limbed up a pine tree that was really close to the deck and the main thing impeding our lawn mower access to the area, the mowed the area with the blade really low. Then I followed up immediately with another vinegar treatment. I don’t expect to kill everything that’s growing there. I think that’s probably unrealistic with an organic method. However, I hope that by getting rid of a lot of it, and then by growing a healthy lawn, the grass will eventually crowd out most of the weeds.

A few days later we had four trees removed, including the pine tree we limbed up (we knew it was coming down, but we wanted to just trim it enough to get the mower under there in the meantime). I thought I took a pre-tree removal photo, but I can’t find one, so all you’re see is post-tree removal. The tree guys showed up at 7:15 a.m. and were so efficient that I didn’t even have time to take a picture of them in action.

We will be adding several new trees in more appropriate places to help with screening, which you’ll notice is a real problem, especially in spring before everything leafs out. In the meantime I continue to work on killing before I can work on growing. I think the next step will be get in there and hand remove some of the more stubborn weeds, rake the whole area and hopefully spread a thin layer of soil on top, then seed away.

I have never thought about grass this much before in my life. It’s an interesting change of pace for me.

A quick note/update from my last post: Comments DO appear to be working now, but you have to be in the actual post, not just the home page of the blog in order to see the comment form at the bottom. I’ll try to fix this. Unfortunately it looks like I did lose a lot of comments but I hope to restore those as well. Thanks for bearing with me on this. As always, I really do appreciate hearing from you!