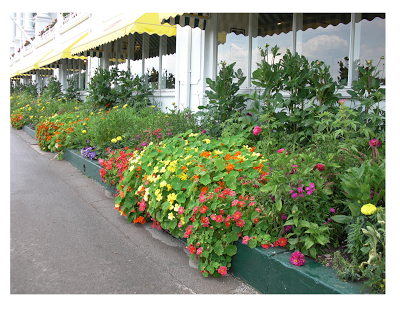 The gardens outside the Grand Hotel dining room. They were filled with zinnias, marigolds, purple fountain grass, dahlias with the most enormous stems I’ve ever seen (must be the horse manure) and, of course, nasturiums.

I really do. They have such pretty leaves and cheerful flowers. And since they are super easy to grow from seed they are CHEAP. I don’t think I planted any of mine early enough this year because I’ve yet to get a bloom, but seeing some of the gardens at the Grand Hotel on Mackinac Island reinforced my resolve to use them more often next year.

First of all, the story of how I ended up at the Grand Hotel is one worth telling. Every year I sail to Mackinac Island as part of the Chicago-Mackinac sailboat race. Because of a last minute change of plans my brother and I were left without a hotel room on the island. Certainly we could have “roughed it” and slept on the boat, but we really wanted real beds and a shower. Following the race the entire island is booked solid. We, however, found a room via Expedia, that was not subject to the three-day minimum most hotels require during this time. But three days later Expedia called and said there was a problem and the room was not available. However, they guarantee a comparable or better room at no additional cost. The only room left on the island was one at the Grand Hotel, a place I could never think of affording. And all the additional cost was picked up by Expedia.

As it turned out, this year’s race was incredibly long, so when we would normally expect to finish early on Monday, we ended up not finishing until midnight, and I didn’t get to the room until 3:30 a.m. I checked out at 9:30 a.m. But I came back later on with my hotel passes and took at peek at the gardens.

So that’s how I found myself falling in love all over again with nasturiums. 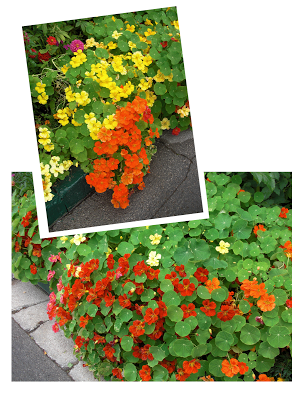 The gardens, overall, were somewhat underwhelming compared to what I’ve seen before near the hotel, but I blame that on the total lack of summer weather throughout the upper Midwest. But in one garden in particular, nasturiums were spilling out of the borders. I loved the look. A friend who I showed the pictures to wasn’t thrilled, and the gardener who I cornered in the greenhouse later on admitted that they had gotten much bigger than she had intended and she was contemplating ripping them out.

This was on one end of the famous porch and I have to say, I love the gaudy colors. There’s a lot of brightness going on there, but I like it planted en masse like that. 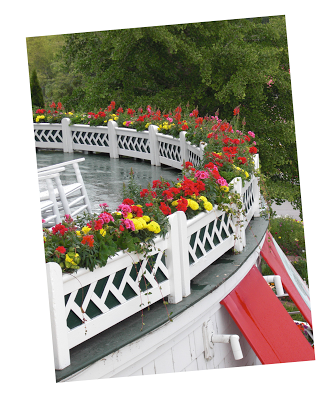 There are a lot of pretty shade gardens as well, with hydrangeas galore (and goodness knows I love me some hydrangeas), and the gardener seems to like patterns quite a lot. This patch of sun-appreciating hostas was in series of zig-zag patterns and I sort of liked the look. 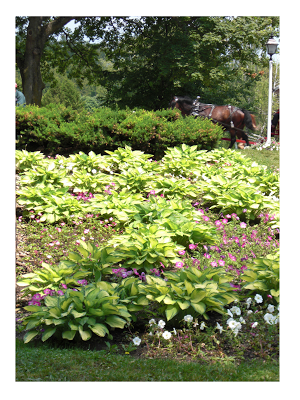 So that’s the report from the island. Lots more interesting posts coming as I catch up … including one about the zucchini plant that is taking over the world.