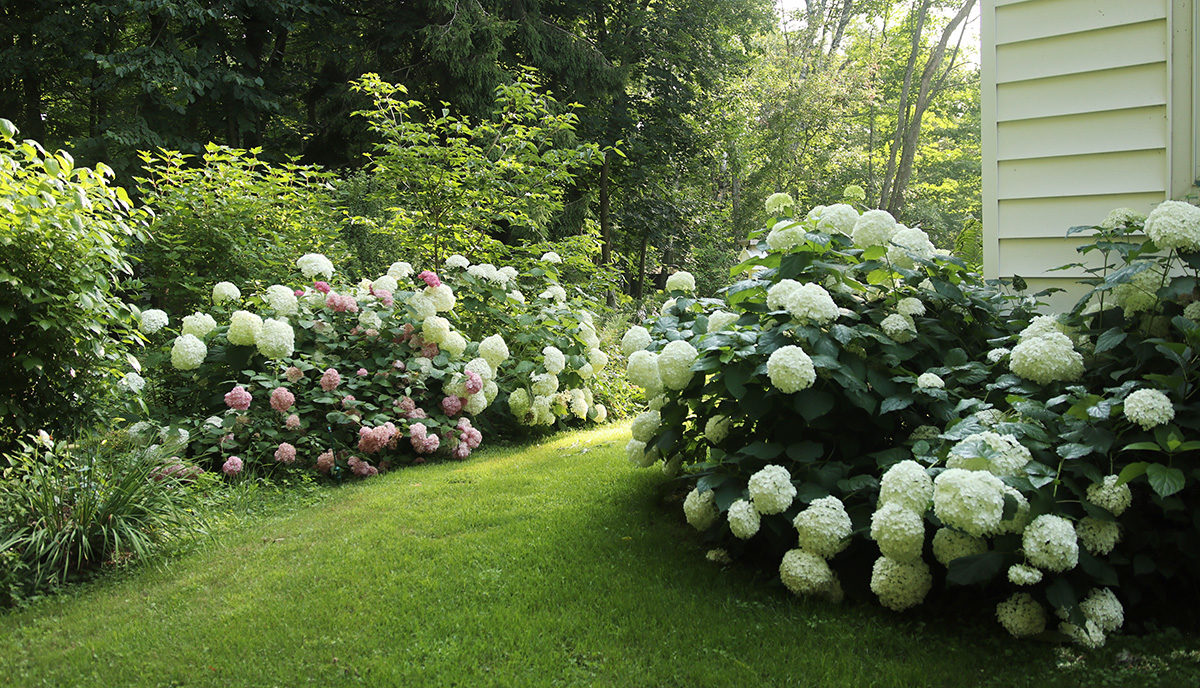 My appreciation for shrubs grows deeper every year as I appreciate the low-maintenance aspects of them and new, improved shrubs of all shapes and sizes are released every year.

Hydrangeas are not unique. In fact they are so popular that even professional plants people will admit they get a little sick of them. But more than any other shrub I grow, I can’t imagine my garden without them.

Hydrangea arborescens ‘Annabelle’ is where it started for me and that’s probably where hydrangea growing starts for a lot of people. It’s a classic. A little floppy, but dead reliable and it spreads a bit, creating its own hedge. 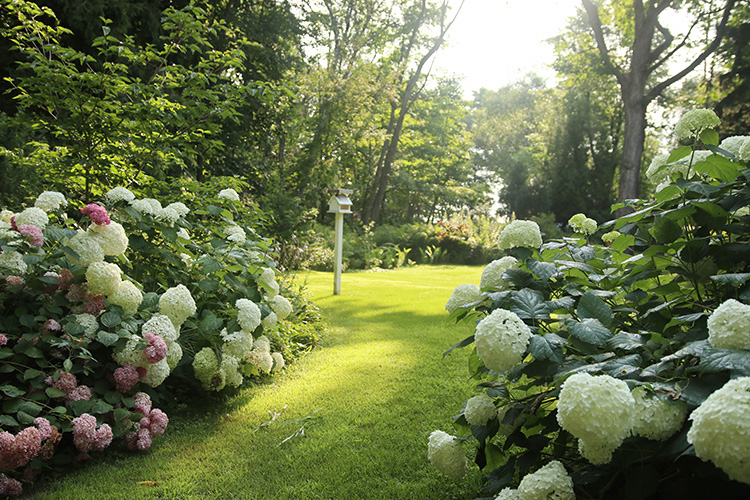 ‘Annabelle’ on the right creates a corridor with Incrediball and Invincibelle Spirit on the left to create a charming walkway.

I’m pretty sure that at the time I planted ‘Annabelle’, which may have been one of the first things I planted at this house, I didn’t realize there were other kinds of hydrangeas. Oh, silly gardener.

Hydrangea panniculata Limelight was probably the next hydrangea that came into my life and that was a love affair from the beginning. The big one that grows here in the patio garden appreciates the full sun situation it’s in and I used to regret planting it so close to the patio side of the garden. Now I appreciate its hulking form in that spot where it shields the view as you’re walking down the path just a bit, creating a bit of intrigue. I prune it pretty hard (some years harder than others) but its still 8 feet by this point in the summer. The flowers have just opened and they are, true to its name, the most lovely shade of lime. The bees are constantly burying themselves deep in there and the whole thing seems to be mysteriously buzzing on occasion. 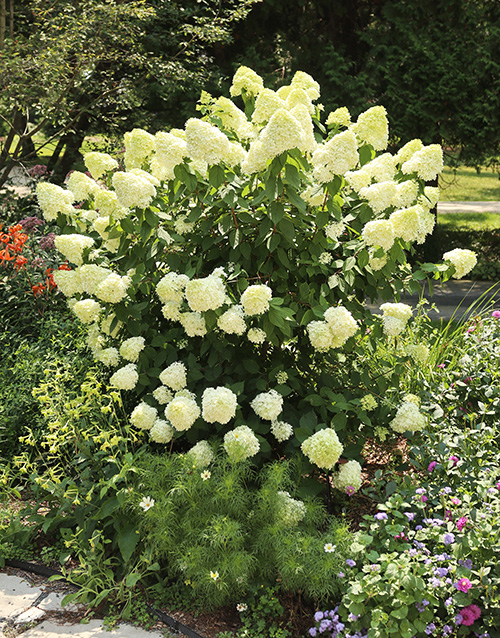 The big Limelight in the patio garden is certainly the focal point of the garden at this time of year. 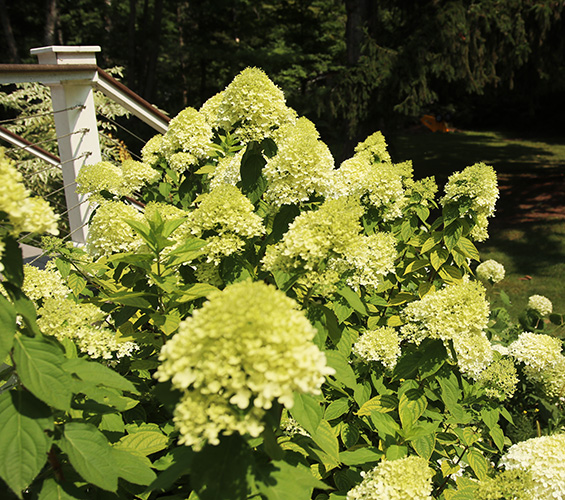 Limelights in front of the deck are still bright green.

After that came Incrediball, marketed as an improvement on ‘Annabelle’, with bigger flowers and stiffer stems but I appreciate both hydrangeas for their different qualities. The flowers are almost obscenely huge and I still have flopping problems when the plants need more water than I give them, as was the case this year. 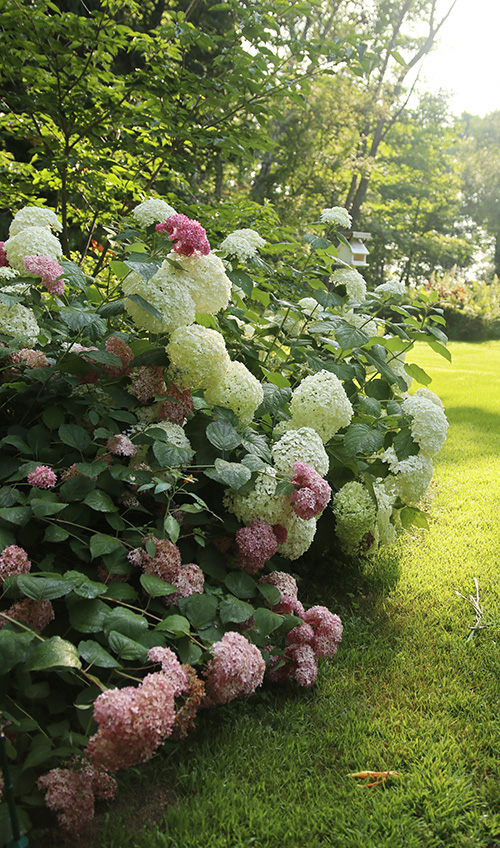 Incrediball and Invincebelle Spirit both flopped a little this year when they didn’t get as much water as they would have liked, but I love how they intermingle. 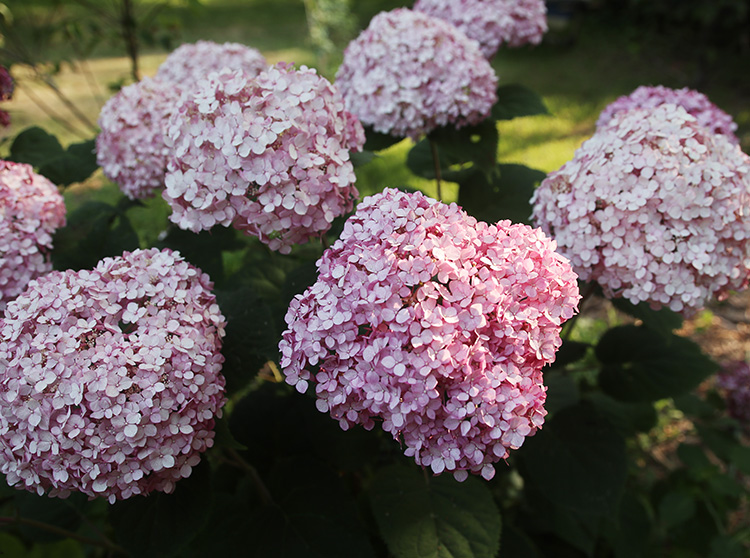 Invincibelle Spirit II is a little pinker and holds its color better than its predecessor.

Recently I’ve started appreciating hydrangeas with flowers that are a little airier. Hydrangea paniculata Quick Fire has lacy flowers and nice, stiff stems. I think it’s a more natural look in a hydrangea. 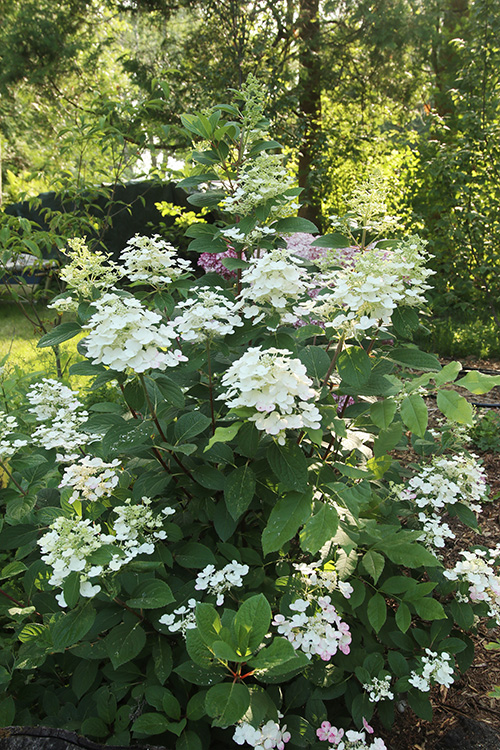 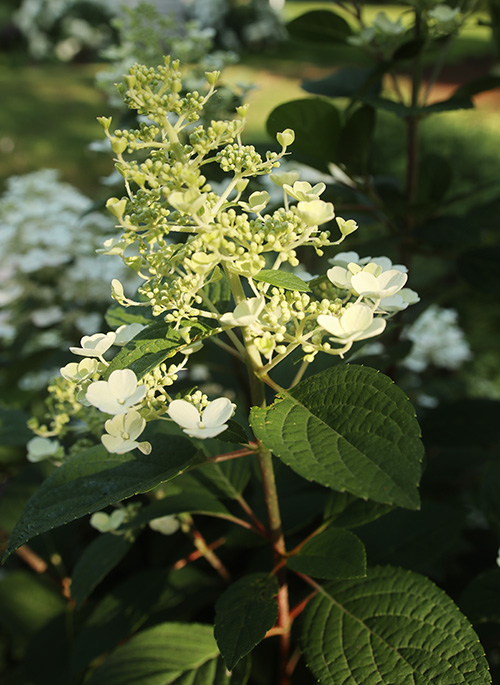 But this interest in lacy flowers led me to the mountain hydrangeas: H. serrata. I’ve grown Tiny Tuff Stuff and Tuff Stuff, but they are only finishing up their second and third seasons in my garden. So far I’m feeling about them the same way I was when I first found Limelight. Interestingly, I’m finding them to be not significantly different in size but, this year at least, the blooms on Tuff Stuff were much larger and I found that to be a more pleasing look. They’ve responded to my treatment with aluminum sulfate to turn them blue to varying degrees. If they prove to be reliable bloomers over the years, I’d rate them at the top of my list for the best shrubs in my garden. 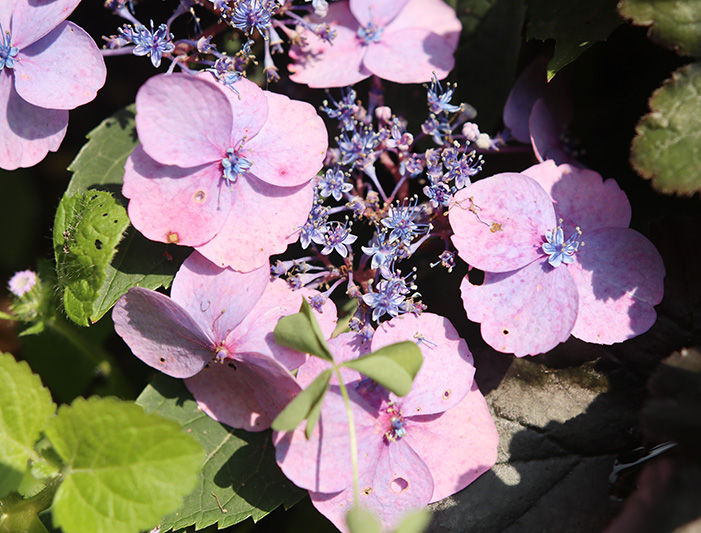 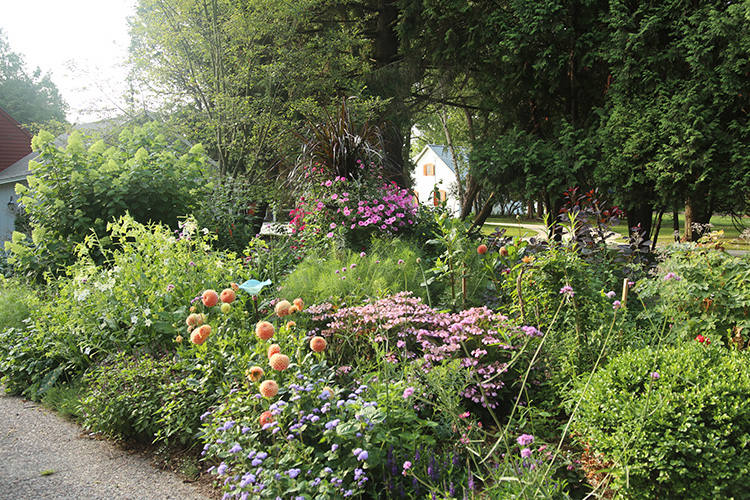 Tiny Tuff stuff is that sea of dark pink (a few plants went bluer than others) in the middle of the patio garden.

I also added H. paniculata Bobo to the circle garden last year and this is truly a remarkable plant. It stays low—stocky even—and gets entirely covered in fluffy white panicles. In the places where there’s not a flower I know a deer has done some nibbling. It’s an amazing plant for a small garden. 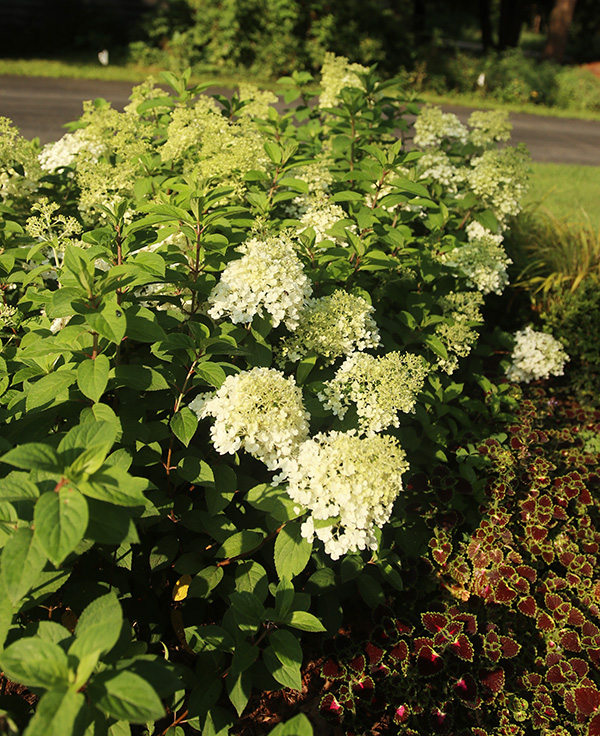 Bobo is just getting going.

Of course there are other hydrangeas that I’ve tried and others still growing in my garden, including the oakleaf hydrangeas I planted earlier this year. On many others, the jury is out and a few are not performing well enough to stay in the garden if I find something better to plant in their place. 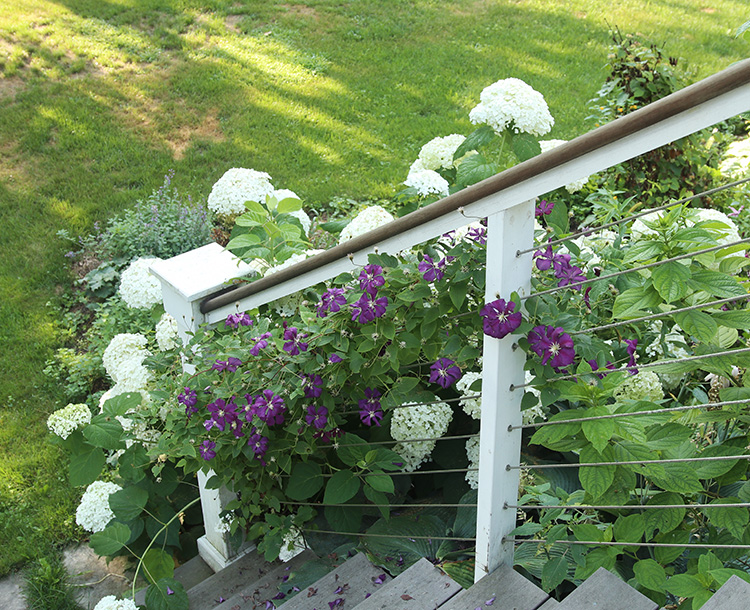 Incrediball mixes well with the ‘Etoile Violette’ clematis that scrambles up the deck railing.

I’m always happy to try a new hydrangea. I’m certain I’m bound to fall in love again. But I know for sure, they’ll always have a home in this garden. 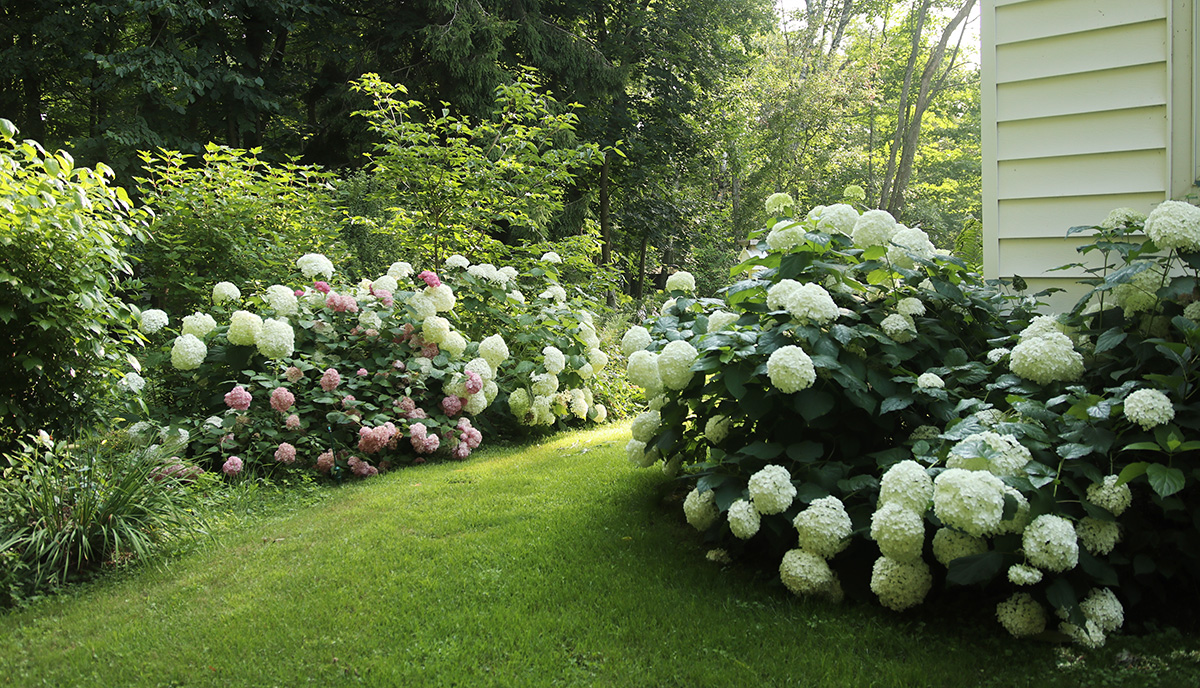