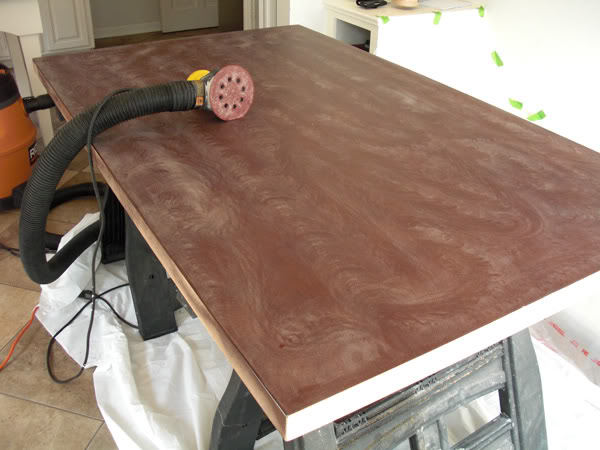 This is Part 2 of a series on how I changed a brand new (but flawed) table into just what I needed. You can find Part 1 here.

With the table the right length (and the legs in the right place), it was time to finish it. Like a lot of furniture refinishing, the concern was that the table would be covered in brush marks and that was not the look I wanted. I sampled multiple paints and protective coatings on the two pieces of table we cut off, practicing different sanding and application techniques to figure out which worked best. Ultimately I used the random orbital sander and 120-grit sandpaper to rough up the shiny surface of the table. I made sure to keep the sander moving to avoid sanding straight through the thin veneer (REALLY thin veneer … I can’t believe how much this table originally cost given what I thought was rather cheap construction, but I digress). On the legs and curvier bits, I hand sanded. I should mention here that I disassembled the table for ease of finishing. I put the legs on the workbench on little dollies so I could spin them around to finish all sides.

Then I coated everything in Zinsser’s BIN primer. I used cheap foam brushes for this step because I didn’t want to have to clean up good brushes afterwards. After the primer dried, I gave it a light sanding just to make sure it was nice and smooth and then I painted the legs and the trestle with two coats of Benjamin Moore Satin Aura in Mascarpone. I used a good paintbrush for this. (The Orel Lily Filbert brush from Omega is my absolute favorite and it was worth every single penny. It was not cheap as far as paintbrushes go, but I take really good care of it because I love it so much.)

Once the legs and trestle were completely painted, I brought them upstairs and reassembled the table (and threw down a tarp on the floor because I’m a messy painter). I figured it would be much easier to paint the top of the table with it attached to the legs. I followed the same steps as I did with the other parts of the table, making sure to run my brush lightly all the way from one end of the table to another to avoid brush strokes. The Aura paint is somewhat self-leveling, so it will dry smoother than it looks when you put it, but not if you overwork it. So I I’d put some on rather quickly (not slopping it in, but looking for a nice coating), and then remove most of the paint from the brush, hold it at an angle and run it all the way down the paint I just applied.

But I wasn’t really happy with how the Aura coat looked. I knew I’d have to do another coat of paint, so this time, after lighting sanding with 200-grit paper and removing all the dust with a tack cloth (I wear latex gloves, which you can buy in a pack of 400 at Costco for every step of painting, to keep my hands clean and also because I can’t stand touching those tack cloths. They give me the heebie jeebies), I brought out the big guns: Fine Paints of Europe Eco satin (color-matched to BM Mascarpone). This is what I used for the banquette and I knew it would do an awesome job (this stuff self levels so well it’s unbelievable), but it’s also super pricey and I didn’t want to spend the money to do the whole table in the stuff. Plus, I had some left over from the banquette painting project. Now it was looking great.

But it was a little too perfect looking for my taste. I wanted it to look a bit aged, especially since I knew it was bound to get a little beat up over the course of what I hope is many years of hard use. I started distressing it with some sandpaper. Let me tell you, there is a reason they call it distressing: It is very distressing to take sandpaper to a piece of furniture you’ve just obsessed about painting for weeks. I started out with a little distressing at first and then sort of freaked out.

Enter Rayan from The Design Confidential. Rayan has some great finishing tutorials on her blog and I referred to them often, but when it came to the right amount of distressing, well, I just sent her an e-mail with some pictures. Over the next week she proceeded to hold my hand (virtually) through the emotionally distressing process of distressing. Sure, if I screwed up I could just paint it again, but come on, who wants to do that? Once, with Rayan’s help, I was sure I had the amount of distressing I wanted (Rayan counseled me to distress more, so I did. It was the right call; the last thing you want is a little bit distressed piece, which just looks messy and well, like you didn’t have the guts to do it right or you’re a horrible painter), I went back with some walnut stain I had in the basement and applied it with a Q-tip to all the areas I distressed. Because there wasn’t real wood underneath all that paint, it was somewhat colorless. By staining those areas it made it look much richer, like a farmhouse table was lurking under all that Mascarpone. I followed up with a rag immediately after applying it, so the stain only soaked into the exposed wood and didn’t stain the painted portions. I had to repeat this process a few times to get the color I liked.

After all that, can you believe the hard part is just beginning? It was. The entire time I was finishing the table I knew that I’d have to do some kind of protective coating on it. Although some websites will tell you that you don’t need to put anything over paint and that a topcoat won’t add anything in the way of protection, I disagree. In fact, I actually ended up having to sand and touch up part of the table because a gym bag with rubber feet was set on it before I got around to putting on a topcoat. The rubber reacted with the paint somehow and there was a blackish-purple round stain from the foot that no amount of cleaning would take off.  This is a kitchen table, after all, where in addition to plates and dishes, all manner of stuff is routinely dropped in it (it’s the first horizontal surface when you walk in the door). I did more research on what to coat this thing with than anything I’ve ever done. And then I bought products to sample and try out on the parts of the table we cut off. The criteria for some kind of protective coating was that it A. worked, B. wasn’t too shiny (I was not going for high gloss) and C. didn’t yellow.

Here’s what I tried:
1. Minwax Polycrylic: This was widely recommended on various blogs, but in every test I tried it in, it got an almost crackled finish. I asked several people about it and no one had ever seen such a thing before but it happened to me in multiple tests, including those where I let the paint dry for a week or more before using the polycrylic.
2. Benjamin Moore Stays Clear: It doesn’t (stay clear, that is).
3. Krylon clear protective finish: I’ll be honest, I don’t remember why I didn’t like this one, other than that it is a spray, but I know it didn’t work.
4. Deft Clear Finish Brushing Lacquer: Turns yellow and because it’s a lacquer it’s seriously full of fumes. Not something I wanted to apply inside the house.
5. Minwax water-based Polycrylic Wipe-on: This is what I ended up going with.

Rayan recommended a spray lacquer, but that wasn’t an option because I was working indoors (in the middle of the kitchen, no less).

I applied the wipe-on polycrylic using a staining sponge and that worked really well. I also set up a shop light at the same height as the table so I could see where I had applied the finish because it really is that clear when you put it on. If you overlap just a little bit, you will end up with a yellow streak. I know this because I did it. And then I looked at it for two days. And I realized it would drive me nuts, so I sanded it down really lightly and did it again. I sanded lightly using 220-grit sandpaper between each coat and did three coats on the top. Everything else got just two coats. I wasn’t worried about durability on the legs and trestle, but I was concerned that there could be slight yellowing on the top and I wanted to make sure the table ended up all the same color.

So how did it turn out? Overall, pretty good. It’s not perfect by any stretch. It does look like a sprayed finish, which I love. It’s downfall comes back to that damn top coat. It did yellow, and more than I wanted it to. It definitely looks creamier than the banquette, which is painted in the same color and I wish that weren’t the case. The good news is that it matches the distressed Windsor chairs, which I saved from the kitchen set that came with the house, much better now. The bad news is that I would have much rather had to paint the chairs. Also, I was a little sloppy on the legs and in one spot there are yellow drips of the top coat.

I’m sure I’ll redo the finish on the table at some point. No one else has noticed that it’s a slightly different color than the rest of the white in the kitchen, but I do, and that’s always my criteria. I do these things for me (and the husband), not other people. I think I will wait until the table needs refinishing for other reasons before I tackle it again and when I do, I’ll haul that beast outside so I can spray it.

OK, so it’s not the “perfect” table, but I love it more than anything I could have bought that was even close to my price range, even double my price range. And best of all, I think it looks perfect in the kitchen and we can now seat about seven (or even eight) people there, which was one of the goals of this in the first place.