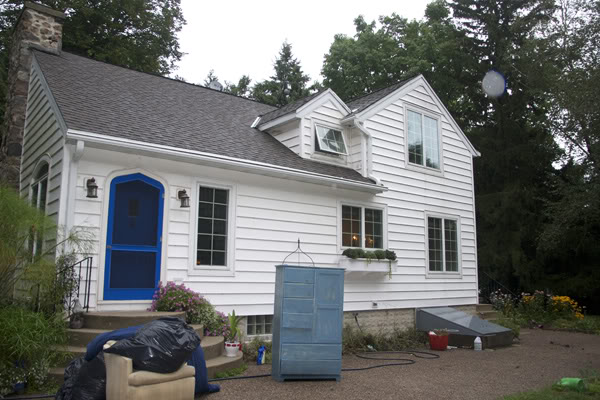 The long-awaited house remodel is finally underway. It’s amazing to think that this was a project we wanted to do from when we bought the house (eight years ago) and seriously started talking about a year and a half ago and all of a sudden it’s here. It’s actually rather shocking; I spent so long not allowing myself to believe it was really going to happen because I didn’t want to be disappointed that the fact that it IS happening sort of caught me off guard.

We’ve had a busy last few days moving out of the upstairs. One very good thing that has come of this is that it forced us to really purge a lot of stuff that we had been hanging onto for no reason. The el cheapo armoire that I bought at the home improvement store, assembled without making sure anything was square and refinished (using a tutorial from Martha … it was a disaster) is gone. None of the drawers fit so they were always just sort of jammed in there at odd angles. What else went? The disgusting drapes, a bunch of old bedding (random sheets that had no partners) that I was apparently saving to cover plants in case of frost, about 20 pairs of shorts that had long been “outgrown,” several bikinis (oh please … if, by some miracle I ever end up fitting in a bikini again, I think I’ll celebrate by buying one made in this decade), a lot of underwear and all kinds of other junk.

I really didn’t know what to expect when I came home from work today. It was shocking. Well, let’s just let the pictures tell the story.

Here’s what the house looked like this morning (ignore the stuff on the patio; we’re not going for trailer park chic … just stuff destined for a Dumpster).

I couldn’t keep myself from exploring the contents of the two trailers filled with garbage (which had been thrown out that boarded up spot where the window once was) and what did I find? CEDAR closet lining! Are you kidding me? Yep, there was cedar in the closets, we just didn’t know about it because someone had drywalled over the top of it. Grrrr.

Then I found some wallpaper that I had never seen. I’ve heard of people keeping samples of wallpaper from old houses and framing them, but I could find nothing redeeming or charming about this wallpaper so I left it right there in the trash.

And here’s what it looked like this afternoon. This is taken from the middle of the other bedroom (the wall between the two has been removed). The brick structure you’re seeing is the original chimney for the house, which is abandoned and hiding in the walls. We (and by “we” I mean not at all me) have to remove it all the way to the basement for the renovation. It is actually made of Cream City brick and I wish I had known that was the case because I would have either thought of something to do with it or found someone to reclaim it. It’s a treasure, really, and it makes me sick to think of it ending up in a landfill when it’s so special. I have to talk to the contractor tomorrow morning about finding a home for it. Of course I’d love to make a little money to offset the cost of this crazy project, but more than that I know someone wants it. Maybe the local Habitat for Humanity resale store wants it.

This is the view into the second bedroom, which is not as demolished as the master. What I love about this is that wallpaper hanging there: They drywalled OVER the wallpaper! I guess that’s one way to get rid of it!

A few observations from today:
1. It feels really weird to have someone doing this to our house. I feel like I just want to tell the house that it will be OK and that, really, it’s for the best, but I feel a little guilty. I have no idea why.
2. I know everyone says remodeling is messy but I can already tell this is going to be crazy messy. I was already vacuuming tonight, which the husband just sort of laughed at my futile efforts.
3. I think we’re going to be moving out of the house sooner than we had planned. Living here during this is going to be frustrating at best and intolerable at worst. Since we have a place to go, we’re thinking about heading there sooner rather than later. Unfortunately, we also decided that the cat has to move to my parents tomorrow. It’s just too dangerous here for a curious critter who once crawled right into an air vent in the 20 seconds we had the vent cover off.
house remodel
by Erin @ The Impatient Gardener
1 Comment
previous post: How to turn an OK table into the perfect table: Part Two (Finishing)
next post: Construction update No. 3: Cool!