I’m starting most of my seeds a new way this year and I’m absolutely loving it. Last fall I invested in a soil blocker and I’ve been using it for all but the largest seeds I’ve sown this year.

The concept of a soil blocker is that you grow seedlings potless, which restricts root growth by “air pruning” instead of roots running into the side of potting and starting in circles. This makes transplanting much smoother as the seedlings never really realize they’ve been moved, they just keep on growing. There are other benefits to soil blockers including not having to deal with little seed modules and the ability to rearrange your seedlings easily. For instance, you can start a tray with multiple kinds of seeds and then move them out to a lighted area as they germinate.

Although soil blockers come in a couple of sizes, I bought one that makes four 2-inch blocks and it suits my needs perfectly. It also comes with a little dibbler that creates about a half-inch hole in the top. You can remove this, but I just fill the little hole in with some soil if I need to plant seeds shallower.

The most intimidating part of using a soil blocker is creating the soil mix. I can’t tell you how many recipes I read online. In the end, I just kind of came up with my own mix and it seems to be working fine. My advice would be to not sweat it too much.

You can buy bagged soil blocker mixes, but some I’ve tried are not great. One had to be put through a sieve and about half the back was too coarse to be used for soil blocks.

The key to a good seed starting mix for a soil blocker is small particles and moisture. You have to have something that will hold together and big chunks are not conducive to the block holding together over the long term. So almost everything I use goes through a sieve.

For my homemade mix, which I came up with after reading other recipes and just experimenting, I’ve been using coir bricks that I’ve reconstituted for at least 24 hours as a binder, a regular organic seed-starting mix, vermiculite, some worm castings and a bit of bone meal. These ingredients (or similar ones) seem to come up in almost every recipe I’ve seen in varying amounts.

Roughly it breaks down to these amounts, although I admit I eyeball it all and have never measured anything.

(Some affiliate links are used)

I use a big soil mixing tray to work it all together, mostly with my hands. (You’ll notice I’m wearing rubber gloves in the photos. That’s only because the mixture gets super messy and it’s hard to sow seeds when you can’t find them in your hand because of all the mess!)

The next step is to add a good amount of water. Even better than water is compost tea. The amount will depend on how moist your ingredients were to begin with but you’ll probably add more than you think. I mix it in with my hands, adding water until when I grab a handful, the mixture holds together a little water squeezes out. Sometimes it’s helpful to reserve a little soil mixture in case you overdue it on the water. 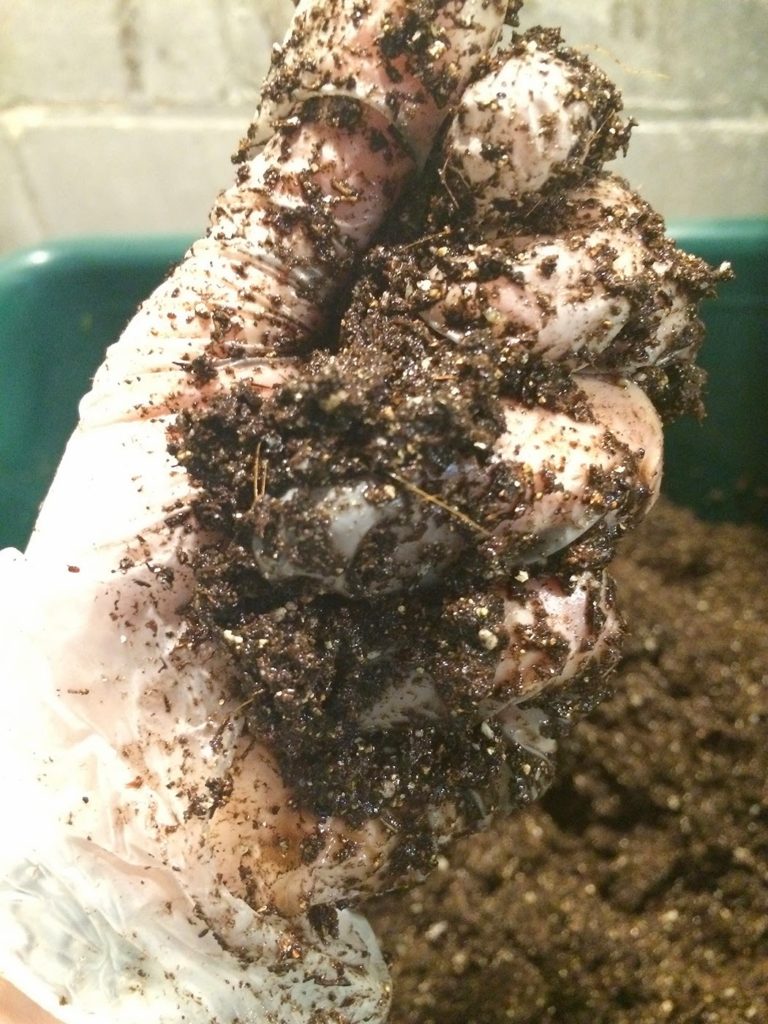 Here’s how you make the blocks:

Then you just plant the seeds as you normally would. If they are tiny seeds that are meant to be surface sown, I fill the depressions in the blocks with a little mix. Then I always sprinkle some vermiculite over the blocks after sowing to help keep them from developing a crust on top.

If you put a dome over the tray while the seeds germinate, you probably won’t have to water for several days because there is enough moisture in the blocks. Once the seeds have germinated and you remove the dome, though, they can dry out pretty quickly. I just pour water in the bottom of the trays once or twice a day and keep a spray bottle handy to spritz the top if necessary.

It’s time to harden them off and plant them out or pot them on when you see a lot of good root growth, which of course is easy to measure since you can examine the entire block unlike when you’re growing in seed trays.

Have you ever tried using a soil blocker?
seed starting seeds soil block soil blocks
by Erin @ The Impatient Gardener
6 Comments
previous post: STOP! BEFORE YOU TOUCH THE GARDEN, DO THIS
next post: A PREVIEW OF NEXT WEEK