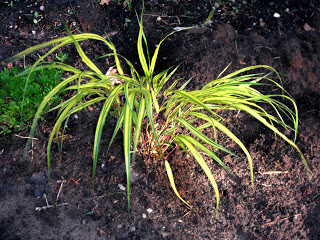 There are a couple nurseries I shop at regularly where the staff are extremely well versed in plant care and selection. I know when I go to these places that the plants I’m buying have been well cared for and provided I don’t do anything stupid, they should be fine in my garden.

But there a couple other places I look for plants. One is a major big box home improvement store and the other is the local hardware store. I never go to either of these stores specifically for plants (unless I’m bored) but I do love looking through the racks for a special gem. The big box store takes horrible care of its plants, so its important to try to get there within a week of delivery. A friend told me she picked up some Hakonechloa, so I had my eye out for it. Well it’s a good thing I had that in the back of my head. Near a pile of unnamed hostas (which I think is really criminal

because hostas have great names and even if you don’t care which one it is, everyone should be able to enjoy its name) was a cart full of random plants. And way on top were the Hakonechloa: about four flats of them. Of course they were being cooked in the sun, but most of them were in good shape. I snatched up three of them for $8.99. They were a nice size, and frankly that plant has been hard to find (which makes no sense since it’s the perennial of the year).

The local hardware store does a much better job caring for its plants, but lacks some of the technical know-how about them. They don’t sell a lot of perennials and what they do have tends to come in numbers of just two or three, so it pays to get there 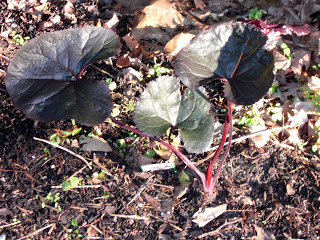 shortly after a delivery. (Fortunately I drive by every day to and from work so I keep an eye on the plant racks). There is no rhyme or reason to the plant organization. They just line them up on the rack. Sometimes the shade plants end up on the top row (occasionally I’ll rescue a heuchera for them and set it somewhere a little less harsh). To really see what is all on the rack you have to do some rearranging and I usually investigate the back of the rack by squinching in between pallets of bagged mulch. That was a tactic that worked great last week as I found a beautiful Japanese painted fern in the middle of the mess. I also picked up a couple of Ligularia Britt-Marie Crawford.

The funny thing about this is that this kind of plant shopping is not unlike picking through the racks at a department store sale, which I HATE. I get bored and frustrated, and never leave with anything that I really like. Guess I’m just better at plant shopping than clothes shopping.