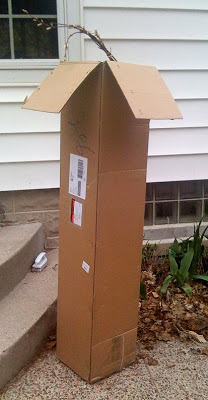 I love mail order, particularly for gardening products, since our selection in the area is somewhat limited. It opens up a whole new world of possibilities. For most gardening companies, before I buy I consult the Garden Watchdog which has customer reviews of companies.

This time of the year, I order so many things that sometimes I forget what’s due to come. So it was with great joy that I pulled into the driveway after work and saw a big box sitting on the patio. I knew immediately what it had to be: Acer japonicum aconitifoli 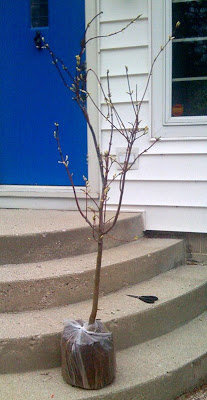 um! This baby came all the way from Oregon from a great tree nursery I discovered on the Garden Watchdog called Whitman Farms. Now, the “Dancing Peacock” Japanese maple, as it’s sometimes called, is not that uncommon of a tree, but the Japanese maple selection at area nurseries consists mostly of Bloodgoods and occasionally a few other varieties. Plus, I bought a Kamagata Japanese maple from Whitman Farms last year and was so impressed I knew it was where I would go for another Japanese maple.

Lucile Whitman, is probably the sweetest person I’ve ever spoken with. When I bought the Kamagata last year she sent me a picture of it in an e-mail and said, “I think it will have a good home with you.” It was a lot like talking to breeders when I was looking for my dogs.

Whitman farms grows their field grown trees (which is what I purchased) in root control bags, and it’s a really interesting concept. As you can see, this tree is pretty big. At a local nursery it would have been in about a 5-gallon pot. The root control bags allow nutrients and water to get to the tree (which is sunk in the ground), but when it comes time to ship them, it’s a lot less soil to pay to ship across the country. The root system is really healthy and not pot bound at all. When I pulled it out of the box I really couldn’t believe how big it was. Sure, shipping ends up being about 33 percent of the cost of the tree, but it’s still less than I would pay for a comparable tree at a local nursery, and I don’t think I’d be able to find it anyway.

So the new tree went in the ground last night. We’re due to get even more rain today and I didn’t want it sitting around waiting to get planted. I’ll post pictures of it in its new home when the sun comes out! 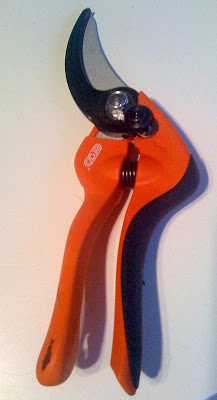 Also waiting for me yesterday was my Bahco pruners. I wasn’t planning on buying new pruners, as I’ve been using a pair of Coronas for a couple years and have been mostly happy with them. Then I read the pruner showdown on northcoastgardening.com and decided maybe I needed a new one after all. What really appealed to me about the Bahco pruners is that they come in different sizes. This makes total sense to me. After all, there’s no way the same pruners are going to be comfortable in my hand and the hand of a big, burly guy. I ordered the PS version in a small hand size with a medium blade. I’ve not used it to cut anything yet, but boy, this thing feels GOOD in your hand. I’m not pruning professionally so I don’t really have to worry about hand fatigue, but I think these are going to make pruning a lot more fun.