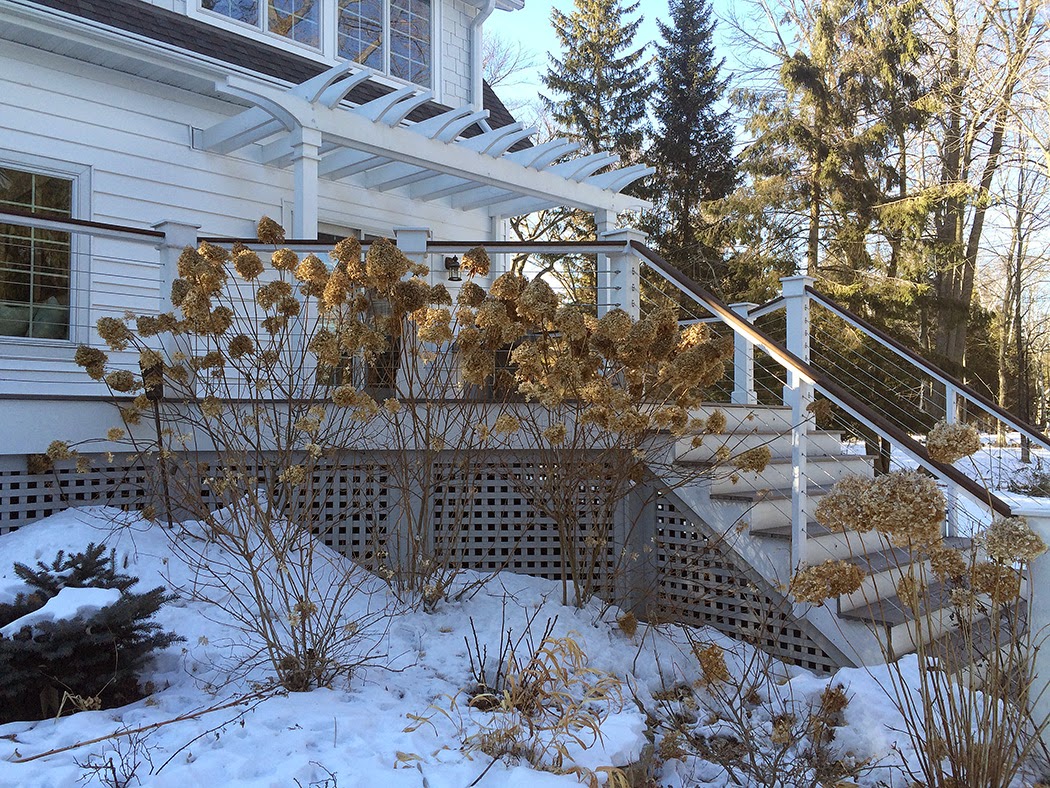 It might have been 15 degrees last weekend but I was bound and determined to garden, and garden I did. I actually had a very legitimate reason to garden: hydrangea pruning time.

I love hydrangeas and have a lot of them, but the only kind I’ve added in the last seven years or so are either so-called smooth hydrangeas (Hydrangea arborescens) or hardy hydrangeas (Hydrangea paniculata). After years of disappointment with  big-leaf hydrangeas that didn’t bloom (the plant might be hardy but the buds, which are set on last season’s growth, rarely are for me), I have pretty much given up on those.

And for arborescens and paniculatas, late winter is the time to prune. I’m in zone 5 so that’s right about now. If you are in a lower zone you might need to wait a little bit and if you’re in a warmer zone, you probably want to get on with it if you haven’t pruned already. The key is that you want to prune when the plant is dormant.

The arborescens I have are ‘Annabelle’, Incrediball and Invincible Spirit and these couldn’t be easier to prune. I just chop them back to 6 to 12 inches from the ground. They bloom on new wood and cutting them back will keep them a little shorter and therefore less floppy. But don’t be fooled into thinking that cutting these hydrangeas back will make them small. My Incrediballs that flank the deck stairs were well over 5 feet tall last summer.

With the paniculatas, you’re mostly pruning to control the size. These also bloom on new wood and there is an effect to pruning, other than the size of the plant. When you prune, you’ll get more flowers but they will be smaller. If you don’t prune, you’ll get slightly few flowers but they will be larger. To me, it all evens out in the end so I don’t worry too much about it but some people might be partial to one look or the other.

My paniculatas are all either Limelight or Little Lime. This year I started with the three Limelights that I grow along the deck. This is the first year that I’ve pruned them and one of my goals with pruning was the even them out. The ground falls away in that area, the one farthest north is considerable lower than the one on the south end. But these are most often viewed from on top of the deck, where they sort of peek up, and it’s odd to not have them even. So when I pruned, I lined up the top of them with the trim on the deck skirting, aiming to have them level on top.

But before I start taking off top growth, I always start with crossing branches. These are never good to have in any shrub or tree, so if I spot a crossing branch, I immediately cut that out. If I were pruning anything else, the next thing I’d do would be to look for dead wood, but I’ve never found any in a Limelight hydrangea. Once I got rid of the crossing branches, I started reducing the overall size of the plant, always cutting back to a leaf bud, which looks like a little swelling on a branch.

Because I was trying to make the three hydrangeas level, the one on the south end got a much more severe pruning than the other two. It will be interesting to watch if there is any difference between the three because of that.

I followed the same procedure for the Little Lime hydrangeas, making sure to take out any branches that were sticking out at odd angles. I sort of like to see the branches end up in a V shape when I’m finished.

The one hydrangea that I’ve not yet pruned is the giant Limelight in the main garden. I’m looking to take out some of the oldest stems in the middle of that one to keep it nice and open, but there is so much snow piled up at its base that I can’t get the pruning saw in there. Temperatures are supposed to increase this weekend though, so I’m hoping it will melt enough to go at that one.

When the ground is thawed, I’ll give all of the hydrangeas a bit of organic fertilizer and a shovelful of compost to get them going on the right foot. Beyond that, they won’t require any maintenance until next spring when I’m once again trudging through the snow, anxious to get on with the first gardening job of the year.