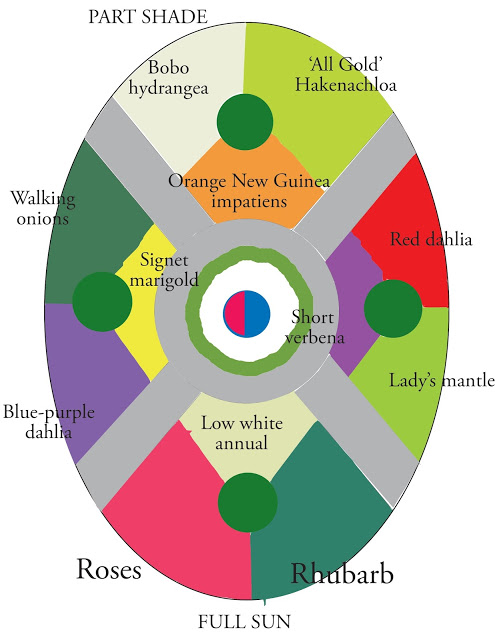 Although it was a major topic in fall, I’ve not said much about the circle garden lately. To catch you up to speed here’s the deal with the circle garden, which is not at all a circle, but “oval garden” is not the least bit catchy. When we bought our house it was a derelict vegetable garden that was mostly weeds with a few random shrubs thrown in. I dug it up, put in a poorly designed garden and as my love for it waned, it got worse each year. It lacked focus and was trying too hard to be all things in a very small garden.
It was a visit from my garden blog friend Linda from Each Little World that spurred me to action. She mentioned that she noticed that at the time she visited (early July) there were many shades of green in my garden, but not a lot of other colors. And she was right. So I worked to come up with a way to really have a blow out of color that was still structured.
The oval garden is a departure from the rest of my garden. Now redesigned with straight paths in an X pattern, it is far more formal in a structural sense than any other place in the garden. It is divided from other gardens by floating in the lawn near the front door, but it can’t feel like a foreign place.

So the goal in designing this garden was to be a departure from the rest of the yard while not looking out of place. That’s a tall order. And the only way to do that was by having a combination of informal plants in the confines of a formal design. Like all gardens, I fully expect this garden to be a work in progress and I think this first year will be largely experimental. I’m sure there will be things that work better than others. Perhaps the whole concept will be a flop. But hopefully it will be a riotous entry to the yard.
Four paths (created laboriously by me in fall) lead to a center circle and create four sections. Each section will have a small boxwood ball in the center and have three segments that radiate out from it. Each segment will be planted with a single plant. Deciding what should go in each segment was a bit like a Sudoku puzzle. I wanted each section to have a seasonal flowering aspect (such as a flowering perennial or shrub), a foliage element for texture and a flowering annual that should bloom all summer. I wanted a combination of warm and cool colors and I wanted some serious play on texture. And each segment had to play well with the segment next to it and across from it to balance the garden. Complicating the matter is the fact that although this is a smaller garden—about 30 feet long—because of the large trees that line our driveway, part of it is part sun to part shade and the other part is full sun.
There is a budget for this project. Not a specific budget, but I can’t run out and buy all new plants just for this. So some of the plants need to be divisions from elsewhere in the garden or grown from seed to make it reasonable.
So here’s what I came up with. What you don’t see in the diagram is the chive hedge, saved from the previous design of this garden. Each segment will be “outlined” in chives. Although there is no repetition in the plants save for the uniting ties of the boxwood balls and the chive hedges, I’m hoping repetition will come in the form of texture and color rather than actual plants.
Moving clockwise, starting at 12 o’clock, here’s what will be in each segment: 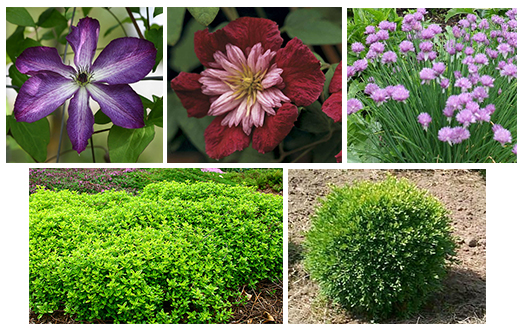 Other plants that will play a role in the garden are the two clematis in the center circle—’Venosa Violacea’, planted last year and ‘Avant Garde’, which I randomly ordered Sunday morning after seeing a photo of it. Around the outside of the inner circle, I’m envisioning a ring of lime thyme, which is a lovely groundcover that looks better than it tastes, in my experience. And then I’d need a more upright but still low annual inside of that to hide the ankles of the clematis. Of course, the chives (upper right corner) are a factor and I think I’ll probably go with ‘Green Gem’ boxwood for the centers of each section.