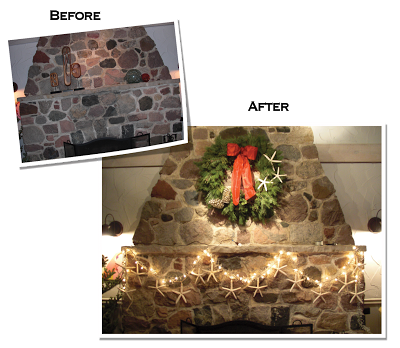 I     t’s been a bit since I’ve had a post here, but that’s because I’ve been busy Christmas-ing things up at our house. To say that I got a bit late this year would be something of an understatement. Since I’m sure most of you already have done your decorations, I’m not expecting to inspire you at all, but I thought I’d show you what I’ve been up anyway. I do, however, have a few holiday decorating tips for you that might be helpful to you next year.

1. Wear disposable latex gloves when you put your lights on the tree to keep the sap off your hands. I actually buy these gloves 200 at a time at Costco and use them for so many things beyond just sap prevention. I use them anytime I paint, when I handle mass quantities of raw meat (which I do on occasion in the process of feeding my dogs) and even gardening. I’m a random weed puller but I also hate having dirty fingernails, so if I’m doing a quick garden chore and don’t have one of my dozen or so pairs of gardening gloves handy I’ll throw on a pair of these.

2. Fishing line is a wonderful thing. I have 60 pound test and 25 pound test rolls in the junk drawer and I use it more often than you would think (and I don’t fish). I especially use it at Christmastime. We screwed two small hooks into the beam on the wall on either side of the fireplace (they are so small you don’t notice them) and string a length of 60-pound test monofilament line between them, then use a cheapo carbiner to attach the wreath on the fireplace to it. That way I don’t have to put a hole in the mortar or the stone of the fireplace. We also use it to tie the Christmas tree up (standard operating procedure ever since 2004 when I had just finished decorating a 14-foot Christmas tree when it fell over). I never want to lose that many ornaments again, and with all the animals we have in the house, a bit of prevention is a very good thing. Lastly, I use lengths of fishing line to attach the beaded garland to the mantel since there are no 3m hooks that will stick to it.

3. Go LED. For about three years now I’ve been planning to convert to LED lights for our tree but have been avoiding outlaying the cash. Of course that means I’ve not been replacing our regular incandescent lights as they stop working, so we were pretty short on lights this year. I decided to just go for it, but I bought about half as many LED lights as I usually put on the tree. It was all I could afford for this year and I planned to pick up the rest next year. As it turns out, LEDs are so much brighter (I bought the “wide angle” ones) that I’m not sure I’ll have to buy more next year. It was the perfect amount of lights (although this is the smallest tree we’ve ever had). I really like them and I feel much better knowing that the odds are much better that when I pull them out of the box next year they will actually work.

4. Stuff your stockings. I fill the stockings up with tissue paper to give them some form (before Santa fills them up Christmas Eve, of course). It makes them look so much better.

OK, enough tips. Onto the pictures. Here’s the before and (almost) after of the mantel area (I put greens on top of the mantel to hide the cords, etc., some silver pinecones and a hurricane full of silver ornaments after the photo was taken). The before by the way, is not great. I have a horrible time accessorizing and looking at the picture I realize just how boring my everyday mantel is. I’ll have to work on that. The after features a clear beaded garland my mother-in-law bought from Pottery Barn several years ago that I’ve twined rice lights through and then I added a starfish garland from Wisteria (bought on sale earlier this year).

I love our little Nepalese-knitted stockings. I think I got them from an outdoor store (maybe REI) several years ago but I like how traditional they are. A stylized Santa I got as a gift from PB years ago serves his duty holding them up. I have to polish him every year, but he’s cute so I do it anyway. 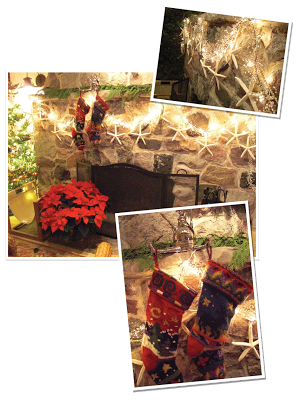 I did much simpler decoration than I normally do on the wreath. I thought there was already a lot going on on the mantel so I wanted it to be a little understated. I also opted for a regular bow rather than the floofly multi-looped variety I’ve been partial to in past years. I cut three of the starfish off the garland and wired them on and stuck a couple silver pinecones on for balance. 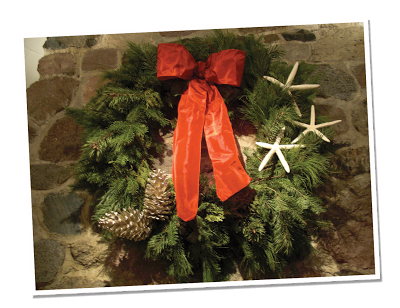 As I mentioned, our tree is much smaller than usual this year. In fact I only put on about 60 percent of the ornaments I have on it, but I still like how it looks. 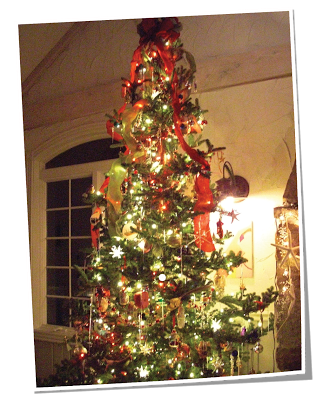 I have oodles of glass icicles on it (and lots more that stayed in the boxes this year). I love how it looks like it’s just dripping with icicles. It adds so much sparkle and shine. My favorites are some that look like real icicles.
Here are a few other ornaments I like:
1. A glass beaded snowflake I made Saturday night at a little crafting night with my girlfriends. None of us are crafters, so it was fairly amusing, but I think we did OK. We were guided, of course, by none other than Martha herself, and after a few glasses of wine we were having a good giggle about her VERY specific directions.
2. My ruby slipper. I always wanted to be Dorothy. This is the closest I think I’m ever going to get.
3. I have a lot of birds that clip onto branches, but this peacock is my favorite.