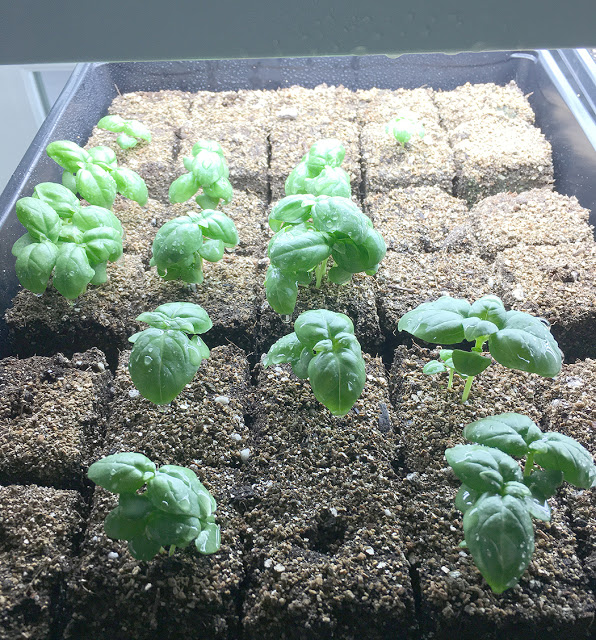 We’re well into seed-starting season at this point. I can tell because I’m bored with it. Well, not bored with it, but it is lot of work to check on those little guys multiple times a day to make sure they are feeling happy.

Overall, I would say my seed starting has not been as successful this year as it was last year. Granted, I’m starting way more different kinds of seeds this year and fewer of each variety (although probably more overall), so I think I’m noticing when one fails.

I’ve had more germination problems than I recall last year and have lost more than a few when they went under lights. I’m blaming that on the heat from the lights, so I’ve been gradually acclimating them to the big light. Still it’s strange to me that even though I pretty much always put two seeds in each soil block it seems that both germinate in some blocks and none in others, but rarely does just one germinate. This leads me to wonder if I don’t have a problem with my soil block mixture. I can’t imagine how I could as I’m using the same ingredients and “recipe” as last year.

This is my first year growing tomatoes and I just started them a week ago (well, 10 days now) as I didn’t want huge transplants because I’m convinced that’s not great for plants. I planted six soil blocks of each variety, figuring I’d lose one of each, have up to two for myself and two to pass along to friends and maybe a spare. But they are germinating unevenly, some are not coming up at all and others seem to be succumbing to the dreaded damping off. So I’m not really sure what’s happening, but I think I’m going to start a few more in a more traditional plug tray and see if that helps.

I set up the temporary greenhouse last weekend and have moved several flats of seedlings that had already been potted on out there. (Some of you have asked about the greenhouse: It’s the Flowerhouse Pro and I really like it. All the shelves come with it and store flat when not in use. It has big pegs to hold it down in the wind too, but I’m not sure how it would work if it were not on grass where it could be pegged down. That’s an affiliate link; thanks so much for your support!) There was just too much in the house and not enough light to accommodate them all so something had to brave the up-and-down temperatures. Everything that I moved out there seems to be doing well. My guess is that the additional light they are getting there is making up for the chill.

I also started some dahlia tubers last weekend. I was very encouraged when I went to my parents’ house to retrieve them (they have a cool but heated garage) and they were busting out the top. Unfortunately only the top layers in each box survived. I buried them in peat, but I think they were too dry, so I bet I lost at least 15 tubers. I’m glad that the ‘David Howard’ tubers were on top because I didn’t buy any more of those this year. I also ordered a few new dahlias, which I potted up and have in the house until they sprout.

Gardening is always full of victories and defeats. Might as well get some of the latter out of the way early in the season.