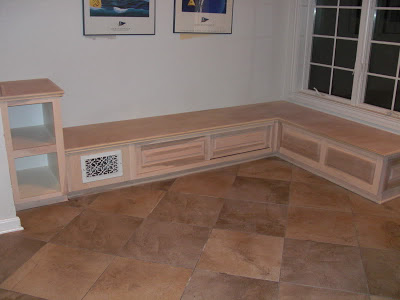 O  r is it the other way around?

I’m in the midst of a bit of an experiment with paint right now. I’m painting my NEW BANQUETTE!!!!!!! (Can you tell I’m a little excited?)

A great craftsman took my rambling notes and turned what was in my head into reality … and then he installed it in my kitchen!
He made it all to match our existing cabinetry, and since our existing cabinetry is white, the banquette will be too.
Of course I’ll have loads of pictures for you as this process continues, but there you see the starting point. Since I didn’t want to the banquette from the get-go, I spent some time on painting forums, where a lot of professional painters hang out, looking for tips. My biggest dilemna was about what kind of paint to use. Waterborne or oil? Any specific brand? And the issue was worth even more research because our kitchen cabinets are in rough shape. They are nice cabinets, and I like the color, but they’ve been around for at least 20 years now so they are getting to the point where they need to be repainted, and I’m reluctant to spend a great deal of money to have someone paint them for me (for some reason I resent paying people to paint. I can’t build a banquette because I just don’t know how, nor do I have the proper tools, but I do have a paintbrush and I understand the basics of painting. I know I won’t do as good of a job as most professionals, but I can do SOMETHING). So I’ve been looking at this banquette painting project as practice for painting the cabinets (which is not happening this year).
A number of brands of paint were discussed on the paint forums, but I decided to give a brand called Fine Paints of Europe a try, as it was described as the holy grail of paint by some pro painters. And it better be. At about $100 a gallon (well it’s not even a gallon, it’s 2.5 liters) this is not the kind of paint you want to just use willy nilly. If this paint was as good as they said, it would be worth it.

I called Fine Paints of Europe and had the most pleasant experience. A very nice man named Emmett answered and immediately set to helping me. I told him about my project and said that I was wary of spending this much on paint. I described myself as a proficient DIYer, but by no means a professional. And he told me it was his opinion that this paint would make any paint job better than it would be if we used a different paint. He suggested I buy a “Dutch Door Kit” which is sort of their sample pack. Basically it’s everything you need to paint a door but he customized it for my needs. Three days later I got a box with a small can of oil-based primer, a 1-liter can of Eco waterborne paint matched to Benjamin Moore’s Cotton Balls, four paint sticks (thank you … I always run out of paint sticks!), sand paper and the most amazing paintbrush I’ve ever held. Emmett talked me through everything, talked about technique, sanding, etc. It was by far the nicest customer service experience I’ve had in ages. To me, that alone is worth the price of the paint.

But the question remained: Is putting such great paint in the hands of an amateur a little bit like giving a fine wine to an 18-year-old who has never had a drink before? Like handing fois gras to someone who only orders takeout and then asking them to cook it? Like letting someone who doesn’t know how to drive stick get behind the wheel of a Ferrari Testarossa?

Well, the jury’s still out. So far I’ve sanded, primed, sanded and applied coat No. 1 of the finish. What I’ve learned so far is:

1. When they say don’t overwork the paint, they mean it. The places that look the worst are the places where I fussed too much with the brush. The places that look like a sprayed-on finish are where I put it on and left it alone.
2. Maybe even moreso than good paint, a good brush is an amazing thing to have. I thought I was using good brushes (Purdy, mostly). But the brush they included in the kit was an Omega brush ($28 value) and this thing is insanely awesome. I don’t think I’ll ever use a cheap brush again when it matters. I’m totally sold. And you better bet I took extra care when I was cleaning it.
3. Even when you think you have vacuumed until you can vacuum no more, dog hair WILL find its way into your paint.

I studied my work pretty carefully this morning and I’m amazed. This paint claims to have great “self-leveling” characteristics and I have to say it’s true. Where I saw a mass of brush strokes last night was mostly if not completely smooth this morning. It’s no spray finish, but with a little work on my technique, I definitely think I’ll be up for painting the cabinets in the future.

By the way,  you might notice the different colors of paint peeking out from below those posters in the wall in the above picture. That’s my sneaky way of testing paint colors: I paint a patch of a sample color (or colors) under the posters, then remove the poster while I’m thinking about the color. When I don’t want my kitchen to look like a patchwork quilt, I cover up the samples with the posters. And if I had done it correctly, you would never know those different colors were lurking under there. I got a little overzealous and painted too far, so it sticks out the bottom a little bit, but no one has said anything yet.