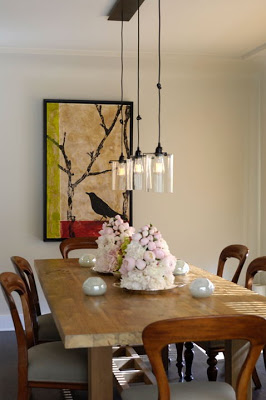 E   very once in a while inspiration strikes. That happened Friday night and it came on so strongly (I think you might have been able to see the light bulb over my head) that even though I was snuggled under the blanket, I jumped up from the couch to run from the basement to grab the object of my inspiration.

But before I tell you what that is, let me tell you the convoluted path my brain took to inspiration. I’m in the middle of what I thought was just a little sprucing up of the kitchen but the other day it occurred to me that this is on the verge of an all-out eating area renovation. I found some lights that I love in this picture on Houzz.

For a week now I’ve been obsessed with those lights, but they are not in the budget. So I’ve been searching the Internet like a Google maniac looking for an acceptable substitute. After a lot of hand-holding by a friend (who has the completely unpleasant job of walking me through these minor home decor-related obsessions), I came to the conclusion that I’m just going to have to adjust the budget to accommodate those lights. And then I made a really bad mistake. I added up how much this “little” project is going to cost. And I felt ill. Even though I’ve impressed myself with my ability to find great deals on this project, it’s still way more than I intended to spend and frankly I wish I hadn’t done that little bit of math.

So that brought me to the “entry” portion of this project. We have no real entryways in our house. Both doors open up smack dab into the middle of a room. There’s not a closet to be found anywhere in either room. Ten dollar coat trees my mother-in-law brought over the day after we bought the house have done a yoeman’s job, but we have the bad habit of loading up the one in the kitchen to the point where it sometimes falls over. Although I yearn for one of those stunning mud rooms with little lockers and a padded bench on a slate floor and oh, dream of all dreams, a place for dogs coming home from a beach play day to lay until I can get around to cleaning them up, the fact of the matter is that it’s just not going to happen at this little cottage. So it’s time to get creative. And at first, I thought something like this from Pottery Barn’s Samantha collection would do the trick. 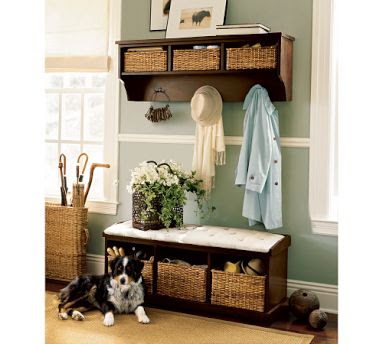 Well, turns out the area I have isn’t nearly wide enough for that and then there’s the little bit about that budget that I more than blew. So I thought, OK, I can do without the bench. We have kitchen chairs three feet away to sit on if we get so wobbly we can’t get our shoes off without sitting down. So I started searching for a smaller version of the shelf that we could put some oh-so-cute baskets in for mittens, hats and dog leashes. Still looking at $100 or so and nothing was really what I wanted.

Then I started looking for an Ikea hack or something that would work. Maybe I could just put up a Lack shelf with a basket on top, hang some hooks underneath and call it a day. Too modern. Then I thought I could find a small bookshelf and mount it high. Too, well, too bookcase stuck to the wall.

Then I came across this post at Apartment Therapy. Hmm, those boxes are sort of cool. Maybe I could stick those to the wall with hooks underneath. Well not those boxes … they were sold out and too expensive for a wood box anyway.

So I ended up finding this way cool old soap box (a box to display soap, not the kind you stand on to spout off your thoughts). 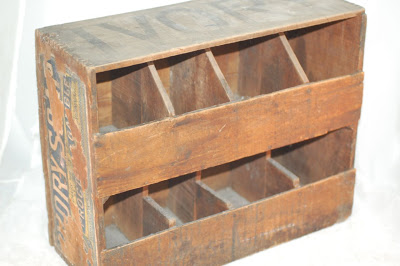 But alas, those cubbies are so small I don’t think they’d serve a lot of purpose (and the shipping on it is pretty high). Of course I keep thinking it’s so cool I may have to get it anyway … but I digress.
OK, next stop on Erin’s attention deficit disorder tour: This little baby. Ooh … that’s fun. Two problems: First, it’s exactly the same size as the space I have available so if either the Etsy seller or I am off on the measurements, I’m in trouble; and second, it’s a box. Come on … it’s cool but if I can find a box close to that I can certainly make something look like that. Plus, after finding the soap box I was loving the idea of something vintage with advertising stamps on it. And I’m supposed to be on a budget here, so how do I justify buying a wooden box?
Well, here’s the moment you’ve been waiting for. Cue the chorus of angels. 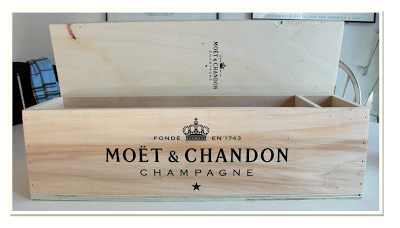 Suddenly I remembered that I have this box from a jeraboam of champagne in the basement. Sadly I did not drink the champagne but my husband was at the party where it was consumed and was sweet enough to bring the box all the way home from New Zealand for me. For about three years now I’ve been using it to store ribbon. So I ran downstairs, dumped the ribbon out (literally dumped it out on the messy wrapping table) and brought it upstairs to hold it on the wall. I think it will be perfect.
Of course it needs some work. It looks way too new. I don’t want it to look like I’m sticking a box on the wall because it has the name of some tasty champagne on it. What I want is something along the lines of that soap box. So I think if I do some distressing and a glaze of color on it, it’ll look like something I found at a great flea market (if I knew where one of those was and if I had the first clue to actually find the good stuff at one).
The other question is how it should be oriented. Right now it has a hinged top. If I stick the bottom of it to the wall, I could use the hinged top as a little door to hide things, which might be cute. Of course then you don’t see any of the cool stamping on the box and it just looks like a cheap plywood box stuck to the wall. The other option would be to take the flip top off and stick it to the wall right side up. Then we’d have sort of a bin for mittens, etc. Not sure what to do.
After that great decision is made, I’ll do something about affixing some hooks to the walls for jackets and leashes. I will probably put the hooks on a board or something that is painted to match the box so that it looks more like it goes together (and so that the board can go into studs and I can space the hooks how I want without worrying about where the walls studs are).
I guess I feel a little bit like Dorothy. After all that searching, what I needed all along was in my home.
by Erin @ The Impatient Gardener
2 Comments
previous post: File cabinet planter
next post: Yipee! It’s catalog season!