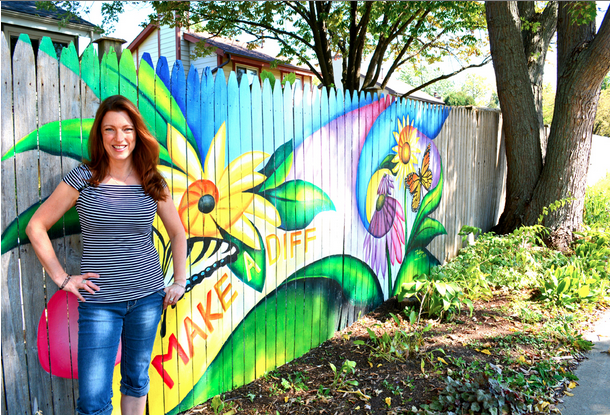 Rules set in stone have always irked me. I’ll admit, I’m not a big follower of the rules, to the point where I’m more interested in breaking one when someone makes a big fuss about how there are no exceptions. I’m not talking about laws here, just rules. I know this is perhaps a bit of an immature viewpoint, but I think rules that are black and white are the lazy man’s way of dictating.

I realize that black-and-white rules come about because somewhere, sometime someone took advantage of a more lenient policy and someone complained that it wasn’t fair. I totally get that. But just not wanted to have to explain your rational is not a reason to make lazy rules.

This is especially true when there is no good reason for a rule other than, “Well, what if someone else did the same thing but it was mean/ugly/stupid?”

And that’s exactly what is happening with a fence in suburban Chicago.

Shawna Coronado is a garden crusader (my term, not hers). Basically a few years ago she quit her job and became a full-time landscaper, blogger, speaker and garden motivator. I’ve posted pictures from her front-yard vegetable garden from which she donates hundreds of pounds of fresh vegetables to food pantries every year. She’s also done a great TED talk.

A few months ago, the fence outside Shawna’s family’s house was sprayed with graffiti. I can’t imagine how violated I would feel if someone did that at my house, especially when you spend so much time trying to make the outside beautiful for yourself and your neighbors.

Nobody wants to see graffiti in their neighborhood and graffiti often begets graffiti (by the way, what ended up on Shawna’s fence was not at all artistic, so there was no pleasure to be gained by it). There’s not much to do beyond covering it up. But that’s not so pretty either. So Shawna decided to fight graffiti with beauty. It turns out that what really works to deter graffiti in the long term is art according to Shawna’s research.

She had muralist Peter Thaddeus turn what was a fence that had obviously been painted to cover graffiti into a work of art. It’s bright and cheery and far more welcoming than graffiti. To me, it sends the message that the people in this neighborhood have pride in where they live. 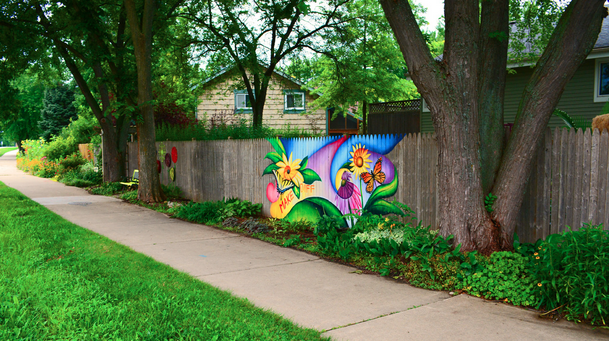 And here’s where the rules became a problem. You see, Shawna’s HOA doesn’t allow fences to be decoratively painted because they don’t want to be in the business of determining what is “art” and what isn’t. I get that. They are a group of volunteers just trying to make their neighborhood better. I suppose they aren’t different from Shawna in that regard. But this kind of black-and-white rule is a good example of a lazy rule. Let’s be honest here: I bet there isn’t a person in that neighborhood who thinks Shawna’s fence is ugly. It’s not a huge area, it’s cheery as heck and frankly it’s the kind of thing that would make me want to live in that neighborhood. The HOA just doesn’t want to stand up and give its unspoken stamp of approval and face the chance that in the future some inconsiderate homeowner will claim that his half rotten, falling down fence is also art and therefore he should be able to keep it.

Of course, there are already fences like that in Shawna’s neighborhood. And those, apparently, are fine. 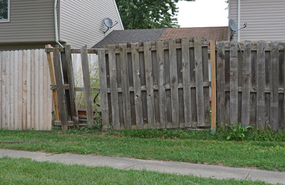 Shawna’s is not. She’s being fined $30 a month for having a fence that does not meet the HOA’s rules. So she’s launched an initiative to sponsor her fence for a month so she can continue to spread the message that graffiti will not be tolerated in this neighborhood.

And it gets worse. She had the message “Make a Diff” incorporated into the mural, but it turns out that’s problematic too. The City of Warrenville deemed that those words qualify as advertising because they tie in with Shawna’s “make a difference” statements on her website. So she had to have that changed as well, lest she face a $750 fine. Now the mural says, “Grow community.”

It takes guts to stand up for something you believe in, and it take serious guts to do it when you know that it’s going to upset some of your neighbors. Guts don’t seem to be an issue for Shawna.

Some people don’t agree with Shawna’s stance and she’s taken a bit of heat about it on Facebook. She admits that the mural violates the HOA’s fence policy, although she didn’t know that at the time she commissioned Thaddeus to paint it. But that’s not the point. The point is that it’s a lazy rule. And we, as a society, ought to be better than that.

All photos are owned by Shawna Coronado and are used with her permission.

fence
by Erin @ The Impatient Gardener
5 Comments
previous post: How to salvage a stained marble tabletop
next post: How to get FREE nautical charts