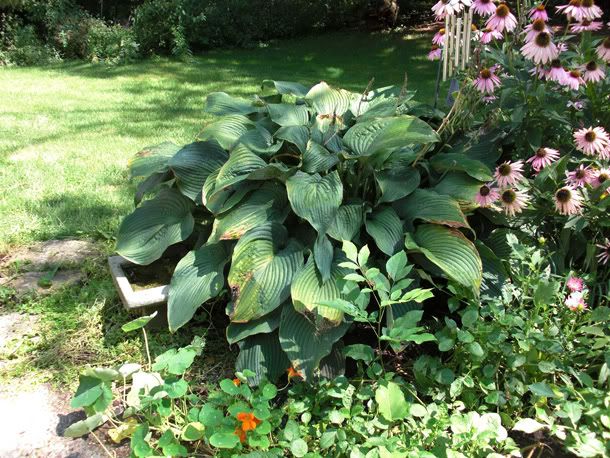 Nope, not a move for us, but for a good friend. This Blue Angel hosta was the first plant I planted here, seven years ago. It has performed beautifully here, where it anchored a corner of the garden. I think a conservative estimate of its size is 5 and a half feet wide. My neighbor says it’s the one plant he always admires from his kitchen window (and his house isn’t very close to ours).

But this part of the garden will be right next to the new deck, so not only does it need to be reoriented so the tall plants are on the other side, it will also be trampled while they are working on the deck. I’m working on pulling out all the plants that I love, but I will construct some sort of massive cage around the Japanese maple ‘Orangeola’ which I don’t want to even think about moving since it is finally starting to grow a little bit.

Since it was the first plant I planted here, it’s somewhat fitting that it was the first plant I moved out for the remodel. I had a nice area suitable for part shade plants so many of them were heeled in there. I suspect they will all spend the winter there as I don’t think there will be time to recreate garden beds and move things in fall once the construction is done.

This would have been an opportune time to divide this massive hosta, but I’ll be honest: I like it big. I didn’t want to divide it and then have to wait years for it reach the same size it is now, so my goal was to move it in one piece.

That is no small undertaking. Fortunately the person who runs the Yahoo plant buying co-op that I’m a member of is a hostaholic so I knew just who to ask about how to move my beloved hosta with the smallest risk of doing major damage. She referred me to this tutorial.

Yeah. Easier said than done. This is one of those projects that really requires two people. But I just had me, a cat, two Newfoundlands and a black lab (staying with us for the weekend), and none of the last four were any help (except for the houseguest Stella who was nice enough to pose with the hosta for scale. Newfoundlands are no good for showing scale because they are unusually huge). So somehow I had to figure out how to wrap a line around that sucker when I couldn’t even reach halfway around it.

Eventually I tied a bowline in one end of the line (everybody knows how to tie a bowline, right? What? You don’t? If you can tie a bowline and a square knot you’re set for life. If you throw in a clove hitch you’re really going places. Anybody want a knot-tying tutorial for a complete departure from all this gardening/house stuff?) and fed the other end through it cinch up the plant, then took a few more turns around the plant and tied it off with a half hitch (OK, that’s a good one to know too, but you probably already know it but you just don’t know you know).

The tutorial said that the next step was to wrap it with masking tape. But I couldn’t find any masking tape, even though I know there is a roll lurking in this house somewhere (the junk drawer eats tape and tape measures, it seems), so I broke out the painters tape.

The I took a break because, well, that was all incredibly frustrating to accomplish. When I was ready to move on, I dug the hole in the new spot. Then I came back and started digging it out. I tried to keep as big a root ball as possible on it but frankly I was just happy to be making progress. When I had gone all around the plant with the shovel and sort of pried/lifted it out. I slid a tarp in there and dragged that sucker onto the tarp by the rootball. Then I dragged it to the other side of the yard. Here’s where I’m going to offer a suggestion not mentioned in the tutorial I linked to: Pick up the dog poop before you do this.

Then I dragged it into the new hole, and filled up the hole with water. After that had a chance to soak in (which didn’t take long in the sandy soil in this area), I backfilled the hole with dirt and watered some more. I took the line off but left the tape to help support the leaves. Apparently the tape will fall off naturally “when it’s time.” The trick now is to keep it well watered while it’s acclimating to its new home.

Then I repeated the process with a Paradigm hosta and a Nikko Blue hydrangea and five big pulmonarias. I’ll dig out a couple other special plants in that garden, but the purple coneflowers and black-eyed Susans are on their own. They’ll live or die, but they’ll have to fight for it!

I’ll keep you informed on this special hosta’s progress.

garden hostas
by Erin @ The Impatient Gardener
7 Comments
previous post: Chair obsession
next post: How to turn an OK table into the perfect table: Part 1