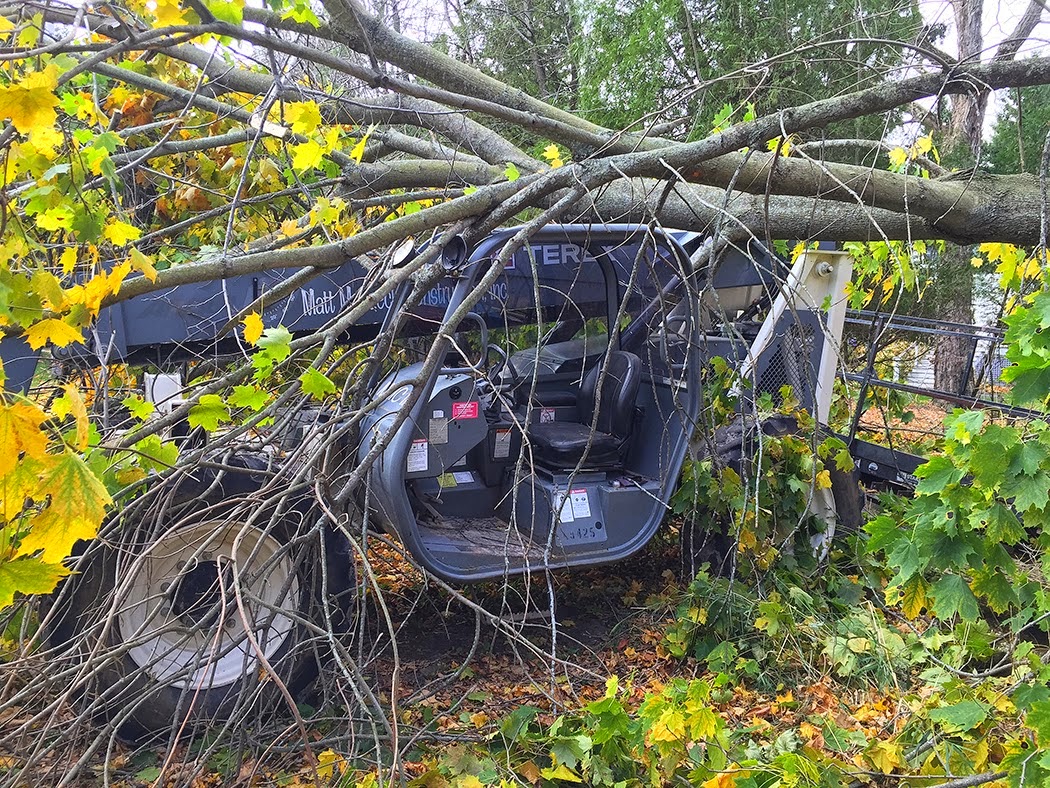 You won’t believe what is happening at our house today. In fact, it was so disturbing to me that I left as quickly as I could this morning without so much as grabbing a photo of it first.

More trees are coming down. Does anyone else get that sick feeling in their stomach when they have to take down a tree, even when you really have no choice in the matter?

We’ve owned our house for a little over 12 years now and I bet we’ve taken down 20 trees in that time. It sort of sickens me. I can think of only maybe two that have come down for purely aesthetic reasons; trees that were failing but weren’t in danger of falling on anything important.

This all started a couple weeks ago when we discovered that half a maple tree right on our lot line had fallen over in a big wind storm and landed on top of our neighbor’s work forklift/cherry picker thing. We paid for the damage (ouch, but what are you going to do) and knew we needed to get the other half of that tree taken down quickly.

We have a great tree guy who I’ve sung the praises of before, but it doesn’t pay to have him come out to just do one tree. Most of his cost is in assembling his crew and getting his equipment out. So if you can lump several trees into one visit the cost per tree goes down dramatically.

In addition to the half maple, we also had him take down a multi-trunked cedar tree that was hanging way over our neighbor’s property. We don’t want to take any chances.

Those two trees (or tree and a half as the case may be) are not terribly troubling losses. But the two others we had taken down today are.

One is a relatively large ash tree to the north of the house that, just by chance, we discovered was completely rotten last week. It obviously has not been in the best of health as it has been dropping branches and there’s a lot of dead wood on the top, but it wasn’t until last weekend that we found that you could stick your finger right into the trunk. I’m not sure what caused this. I peeled off the bark (which was easy to do as it was like a sponge) and did not find any sign of emerald ash borer, an exotic beetle that is decimating the ash tree population east of the Mississippi River and particularly in the Midwest. They leave winding paths under the bark of the tree (see photo below). Once a tree has emerald ash borers there is nothing that can be done to save it.

I noticed that there was a large nail in the trunk of the tree about 6 inches from the ground. I have no idea why it was put there but I wouldn’t be surprised if that created a wound that helped allow whatever claimed its life to enter.

That ash tree probably would not have fallen on our house if it did topple. But it most certainly would have fallen on or gotten entangled with an even bigger ash tree to the east of it. This tree looked to be in mostly good health but almost two years ago our tree guy pointed out to us that it has an 8-foot-long longitudinal crack on the north side of it. We’ve been watching it carefully and in fall we noticed that two more cracks developed. And this big tree would absolutely crush our house if it came down in the direction in which it’s leaning. Our tree guy gave us a really good deal to take it down at the same time as the other trees.

Who knows, it might have been just fine for years, but after seeing the damage that half of a smaller tree caused to our neighbor’s vehicle, I’m a bit paranoid about the whole idea of trees falling over.

Unfortunately the big tree was also my bird feeder tree. We’ll have to find a new place to relocate the feeders to because the birds really need the food at this time of the year.

As for the future, I’m hoping we can find a large tree that will work in the area near where the ashes came down so we can get a start on the trees of the future. We still have a wooded area full of hundreds of trees, but I’m just not comfortable that I know our ratio of trees removed to trees planted is not where I’d like it to be.

The four trees we had removed today needed to come down, I have no doubt. But it doesn’t make the sound of chainsaws and wood chippers any easier to bear and it won’t make their absence any easier to get used to.

ash tree tree removal trees
by Erin @ The Impatient Gardener
3 Comments
previous post: HOLIDAY CHEER FOR OUTSIDE
next post: CHRISTMAS ALL AROUND THE HOUSE: A TOUR