Don’t worry, I have beat myself appropriately many times with a wet noodle as punishment for taking off without so much as leaving a single post in the can. I have to say, I admire bloggers who are organized enough to have a bunch of posts all lined up before they go on vacation. I’m just happy if I can remember to pack my toothbrush.

Anyway, I was off on my annual sailboat race to Mackinac Island and usually I come back with a bunch of pictures of the beautiful gardens there. Unfortunately, this year the race was really slow so I had time for one dinner, one much-needed sleep, a little bit of boat cleaning and a quick stop in a fudge shop before I was whisked back to reality way too soon.

So that’s why this week’s Garden Appreciation Society post is late, but I hope you’ll still join in.

After last week’s pretty but unimaginative bouquet of roses (they didn’t last very well either), I tried to get a bit more creative but I’m pretty sure I just ended up with a hot mess. 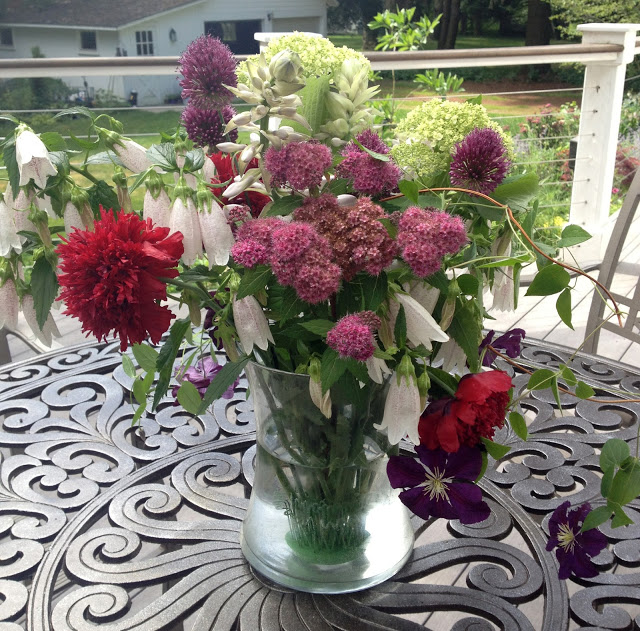 The poppies have exploded all over the place (note to self, cut off those seed pods NOW before they take over the world), the drumstick alliums are peeking, some of the hydrangeas are working up some flowers (if I can get them before the damn deer nip them off) and clematis ‘Etoile Violet’ has gone absolutely crazy with the additional sun it’s getting since we cut down the birch tree. I also threw in some hosta flowers which I never would have thought to do but someone did it to great effect a few weeks ago in their Garden Appreciation Society bouquet and I loved it. I also threw in some campanula that I have tried unsuccessfully to rid my garden of just because it’s such a thug, but they are still pretty and a clipping from a spirea. 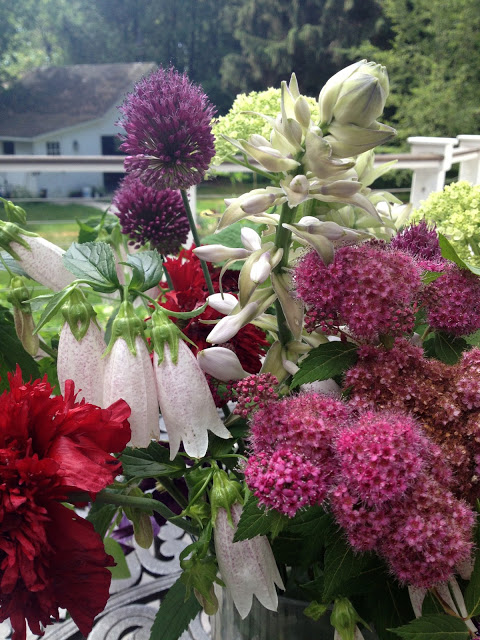 The whole thing is a bit messy for my tastes, but I like that it’s a pretty good sampling of what’s blooming right now. I think I’m entering another phase of mostly green garden though. The early stuff has bloomed and I seem to have a bit of a lag before anything else picks up and starts blooming. The purple coneflowers should show their faces soon and a few daylilies have started popping.

Now’s your turn … link up your fabulous flowers!