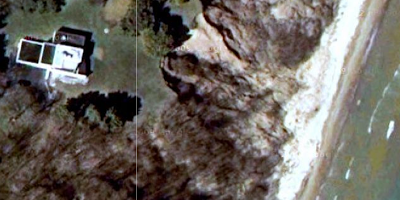 I’ve talked about beach glass before (some of you may know it as sea glass, but here on the Great Lakes that wouldn’t make much sense). But I don’t think I told you just how competitive my family is about collecting beach glass. We’re ruthless. My dad’s collection is now so big, there’s no way I’ll ever even approach it in terms of volume, but we’re always on the lookout for a great, unusual piece to show to the rest of the family in hopes it makes them insanely jealous.

The problem is that beach glass is mighty hard to find these days. Too many plastic bottles and not enough littering, not to mention the fact that the whole world apparently collects beach glass.

But my dad recently found a way to access a stretch of beach that is basically inaccessible other than by boat. Well, by boat or by guts. And he went the guts route.

My parents recently bought the property just east of them that formerly housed my grandmother’s house. On this particular stretch of Lake Michigan coastline, the beach is below about 200 feet of steep clay cliffs, which suck more land from the top every year, sometimes 15 feet at a time. The house was in danger of falling over the bluff in a few years and unfortunately had to be removed.

Here is the Google Maps view of the former house. You can see how little grass was left on front of it, as well as the large area (on top of the little point) where about 25 feet of bluff fell in the lake a couple years ago. About 15 feet a year was probably average but sometimes huge areas would fall in the bluff. You can see the angle of the bluff and then the beach and the lake on the bottom.

Still, there are few forces on Earth that will keep my dad from a beach, so he rigged up several old docklines (he saves all of the old equipment from boats and frequently finds an alternate, land-based use for it) and half repelled his way down the bluff. And there he found the mother load of beach glass.

For three weeks now, all I’ve been hearing about is all the amazing beach glass he’s found. He even went so far as to tell me that there was no point in me going down there because he had already collected all the beach glass. After I heard that my 12- and 7-year-old nephews had been down, I figured I could make it without sustaining major personal injury.

So Saturday I grabbed the husband and the cell phone (“In case one of us dies,” he said) and down we went. Truthfully there’s only about 20 feet that’s VERY steep and the rest are just steep enough that you need the rope for balance.

And I found more beach glass than I’ve probably found in the past three years combined. Most of it was fairly ordinary, but we did find a few special pieces: a very large light blue piece, the bottom of a bottle that has a big “73” on it (found by my husband in a little stream) and the piece de resistance: a bright red chunky nugget of glass. I’ve never found beach glass in this bright red before so I knew I had something great. 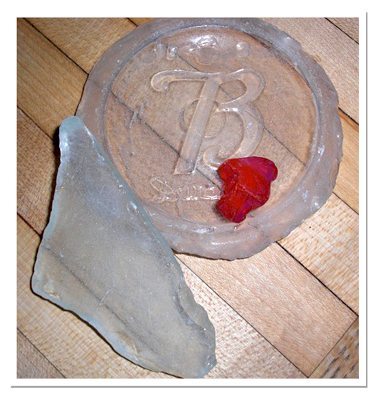 The best pieces of the day.

With my pocket sagging pleasantly with the weight of the beach glass, we made our way back up the bluff. It required a few stops along the way to rest (for me, at least) and a good deal of arm strength in that one very steep area, but I’d say the down was worse than the up.

Then I ran up to my parents house to show my dad the amazing red nugget. I knew he’d be insanely jealous and a little irritated that he hadn’t found it, which was just what I was hoping for. He wasn’t home, but I eagerly showed my prizes to my mom. Who said, “Oh, that’s nice. Why don’t you go look at your dad’s jars?” 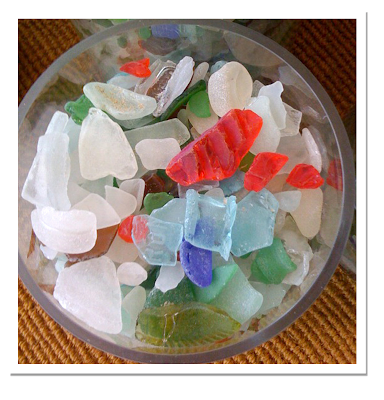 My dad’s latest additions to his collection consisted of bigger and better red pieces than mine.

And what did I find there? Five pieces of bright red glass (from the same source as mine, we’re assuming it was a vase), all bigger, bolder and better than mine. Foiled again. 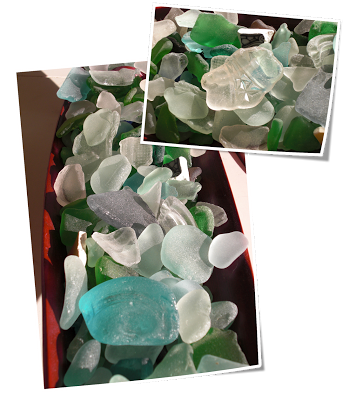 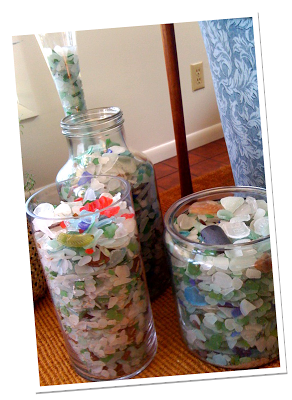 I think he’s a beach glass hoarder. Perhaps we need to stage an intervention.

beach glass
by Erin @ The Impatient Gardener
6 Comments
previous post: A compost bin redo
next post: A good day in the blogosphere