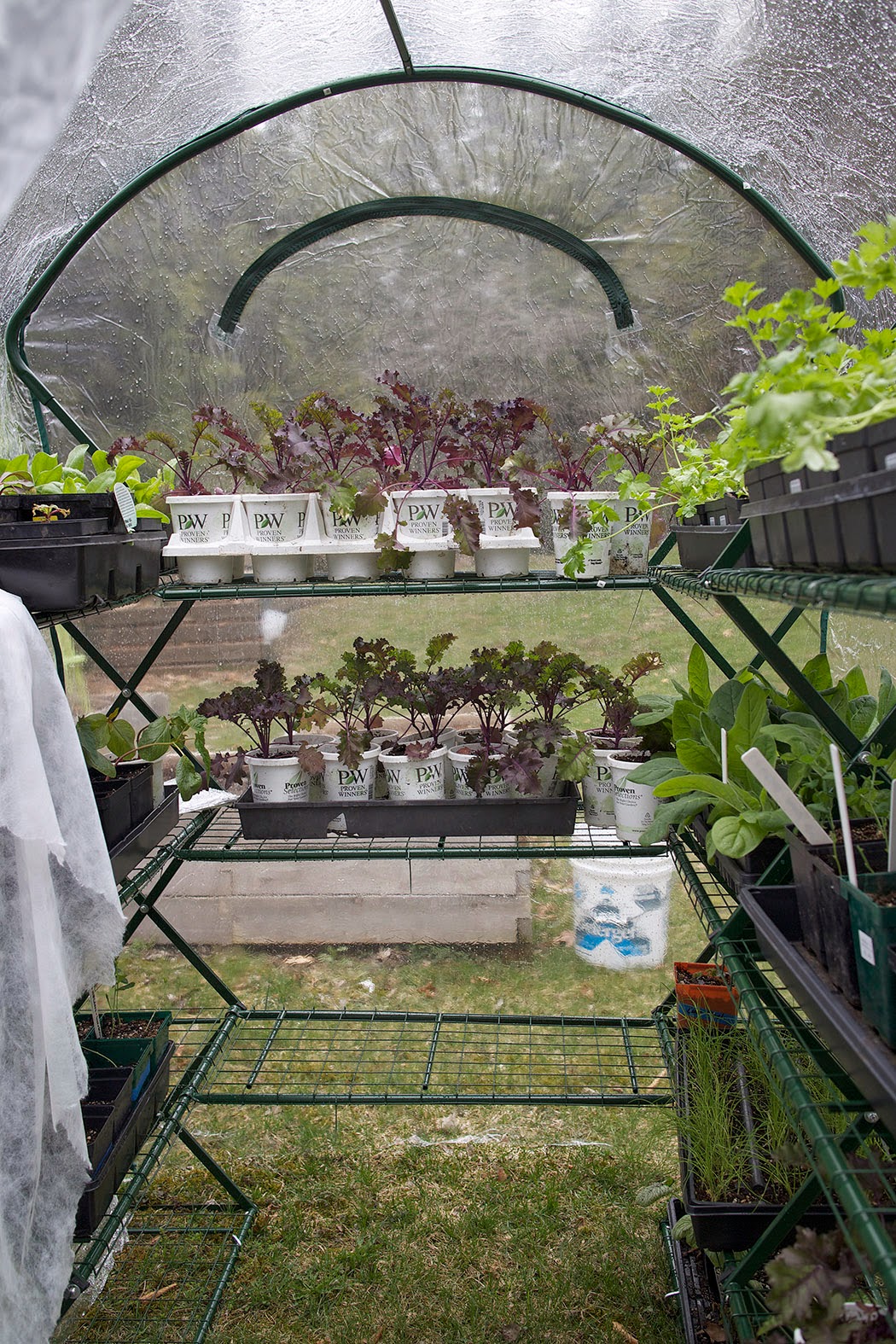 I started more things from seed this year than I ever have and I’m so happy I did. More than just the satisfaction of growing from seeds and the fact that I’ll have a well-stocked garden for pennies, it kept me busy during those hardest months for gardeners. It was lovely to tend to something green.

In fact, I’m still tending. Our last frost date is somewhere around May 10 so I won’t be planting anything that is sensitive to cold until after that (by at least a week). Some things, like basil and nasturtiums have just recently been sown. With the exception of a few larger things or things that don’t like root disturbance, everything was sown in soil blocks and then potted up into either 4-inch or 3.5-inch pots.

But the back room, where I set up some grow lights, was turning into a scene from “Little Shop of Horrors” and something had to get out of there. I ended up buying a large temporary greenhouse that I use mostly for hardening things off. That has created room in the house for the dozens of dahlias I’m starting in pots. Dahlias just need warmth to sprout, but not light, so they are mostly stacked up. As they sprout, I’ll move them into the greenhouse to grow on.

As far as growing from seeds goes, I think I can qualify most of my efforts as successes. The redbor kale, which I will grow as an ornamental (although there’s no reason I can’t snitch a couple leaves here and there) in the circle garden is ready to transplant any time. I’ll be growing other kinds of kale for eating, but I plan on direct sowing these in the garden: I can’t start everything inside!

The nicotiana alata is the big success story of my seed starting. The plants are lovely and healthy. Just last week they all tried to start flowering and I had to nip out the buds. In fact the only problem with these is that they grew much more quickly than I anticipated and they are going to get a little tight in their pots until I can get them planted (especially since a few are destined for containers that don’t usually get planted until the end of May).

I fell in love with signet marigolds last year when I picked up a few at our master gardener plant sale. They have charming little edible flowers and citrus-scented foliage that is pleasant to me, but not to critters. I found the “Tangerine Gem” seeds to be easier to grow than “Lemon Gem” but I have enough of each to spread around the garden.

I’m also growing “Geisha Girl” calendula which I like for its flowers but I’m also hoping to learn how to use it in tinctures and creams (it’s great for cuts and burns).

Gomphrey (aka globe amarinth) didn’t germinate as well as I had hoped, but I have enough of them. And the sweet peas, at least those that escaped the wrath of a cat hellbent on eating them every time she sneaked in the back room, are doing pretty well. All have been nipped back to create bushier growth. 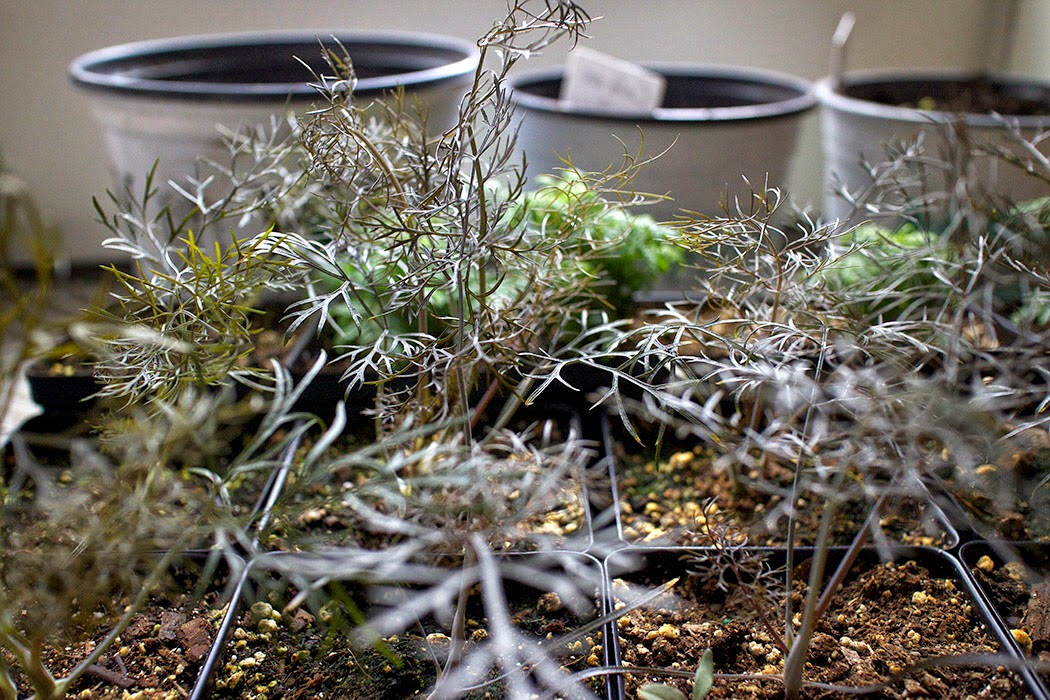 Bronze fennel is gorgeous and I’m hoping I can get these plants to a decent size before putting them in the garden. I love the airiness of fennel. It’s also a host plant for swallowtail butterflies so if it all gets eaten, I’ll at least feel good about it.

The basil has just germinated but looks to be in good shape.

As is often the case with gardening, sometimes the things you want to succeed the most, end up struggling for no apparent reason. That is the story of my verbena bonariensis seeds. After sowing them the first time after chilling them in the fridge and having no germination, I consulted other sources that said nothing of doing that and did a second sowing. My information says that they can take 14 to 28 days to germinate and that they need darkness but warmth to germinate. For three weeks, my verbena seeds have stayed in the darkness of the basement on a heating mat, first covered with newspaper, then with the plastic cover of the flat covered by a towel. I would say that maybe a third or fewer have germinated and while I’ve not brought it into the light, I think it’s time to start thinking about doing that. I haven’t seen anything new germinate in recent days to make me think that any more are going to.

It’s funny that the verbena is being so picky. For many people, it’s almost considered a weed as it reseeds so freely. I’ve never found a self-sown seedling in my garden, either because it’s too cold or maybe because I’m too quick with weeding (although that seems unlikely with my less-than-stellar weeding habits). Still, my dreams of a tray of verbena seem to be fading.

What did you grow from seed this year and how’s it going?