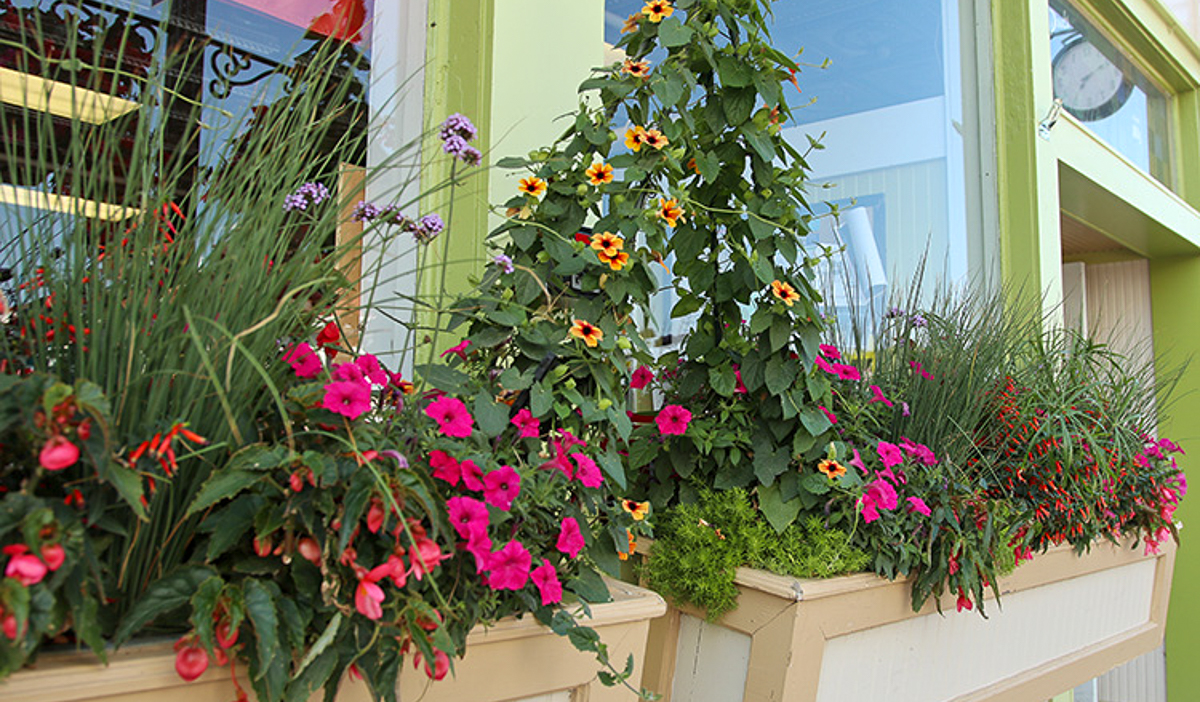 Annual vines are some of the hardest working, best problem solving plants in the summer garden. And with a grow habit so vigorous, when warm days turn to hot days and warm nights, you can almost watch them grow in front of your eyes.

Vines are great for screening the less attractive bits in our gardens: an unsightly fence, big ol’ telephone pole or maybe the nosy neighbors. They also help draw the eye up and soften expanses of walls and siding. And unlike perennial vines, they do it all in one season rather than requiring that pesky patience part of gardening. They can also be removed or cut back entirely at the end of the season, which is helpful if you need to have clear areas for winter for access or snow removal.

Annual vines are also well suited to growing with perennial vines. In that first year when a perennial vine like my beloved clematis seems to just hang around doing very little of anything, growing an annual vine up the same trellis gives you first-year color and coverage without affecting the perennial vine’s future growth.

Vines can be expensive to buy as plants, but there are so many that are easy to grow from seed. Most of them want full sun, regular feeding and consistent moisture, all needed for the huge amounts of growth they have to put in in just weeks. Here are a few of my favorites.

You might know it as black-eyed susan vine, but with so many new varieties available that have little resemblance to the bright yellow flowers associated with the common name, I favor calling this one by its botanical name. These are major growers! I’ve even seen garden centers warn people to not plant them in a container with anything else. That’s a bunch of hooey if you ask me, as containers are Thunbergia’s highest calling.

The interesting thing about Thunbergia is that once it gets to the top of whatever you use as support, it starts going back down, so it works really well in hanging baskets where it will cover the hanging bits of the structure. It also has small leaves, so even when it’s not flowering, it’s attractive.

It doesn’t, however, get entirely covered in flowers like some of these vines. That’s fine with me, but I think most of the time you’ll end up with more foliage than flowers. My favorite seed-grown varieties are Susie White with Eye (catchy, huh?) and Blushing Susie, which is lovely shades of pink to apricot, with those great dark centers. 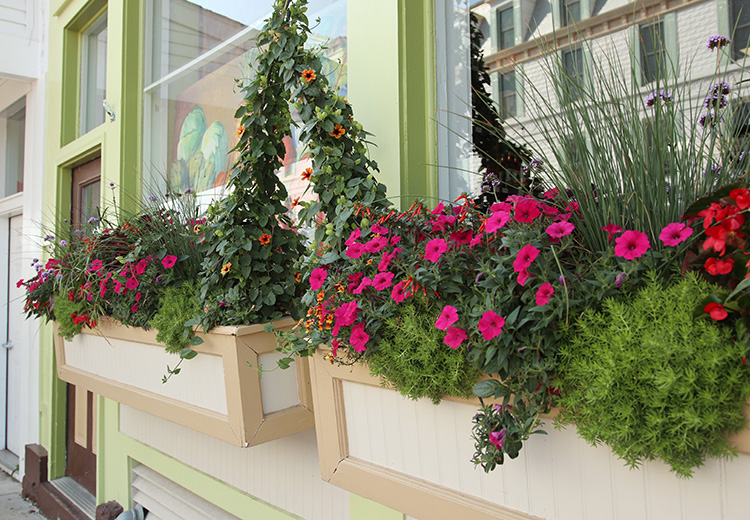 Tangerine Slice-A-Peel, a Proven Winners variety of Thunbergia alata, bridges the gap in these window boxes spotted on Mackinac Island. 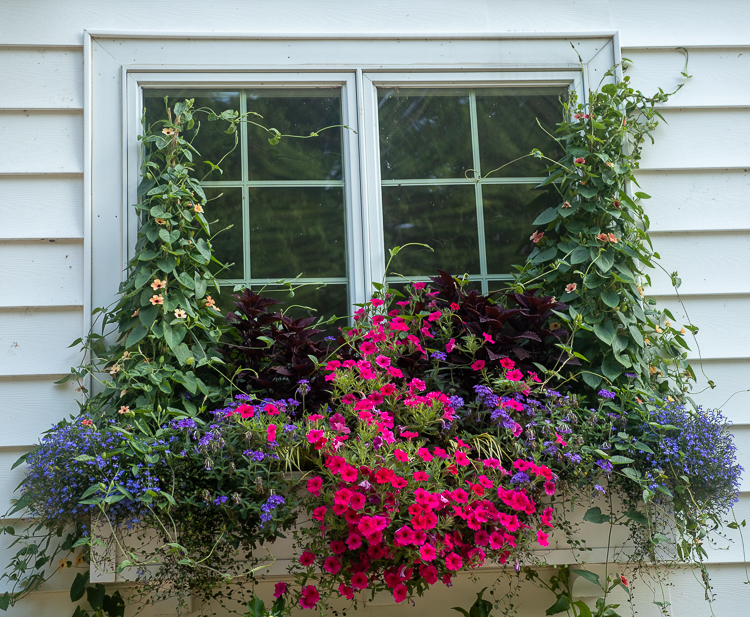 This window box was looking a bit wild by the end of the season, but you can see how the Thunbergia vine on the ends went up and then started coming back down. 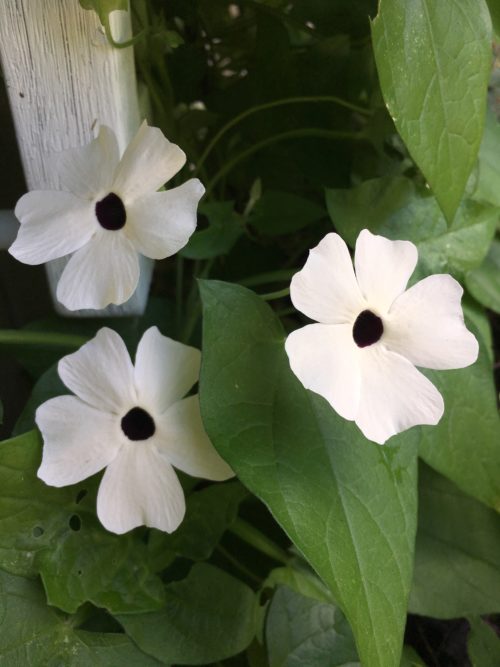 This white version may be my favorite.

I grew cup and saucer vine (Cobaea scandens) for the first time last year, both the white and purple varieties. It took a long time to get blooms on it, but when it did, it was so, so good. This is also the only vine I’ve ever grown in the deck planters that has gotten big enough to actually start making its way across the pergola, rather than just up the post. Give this baby room to grow, then step back and watch it go.

Although it took some time for it to start blooming, the cup and saucer vine in the deck planters grew quickly the top of the posts and started vining along the pergola, the first vine I’ve grown there to achieve that height. 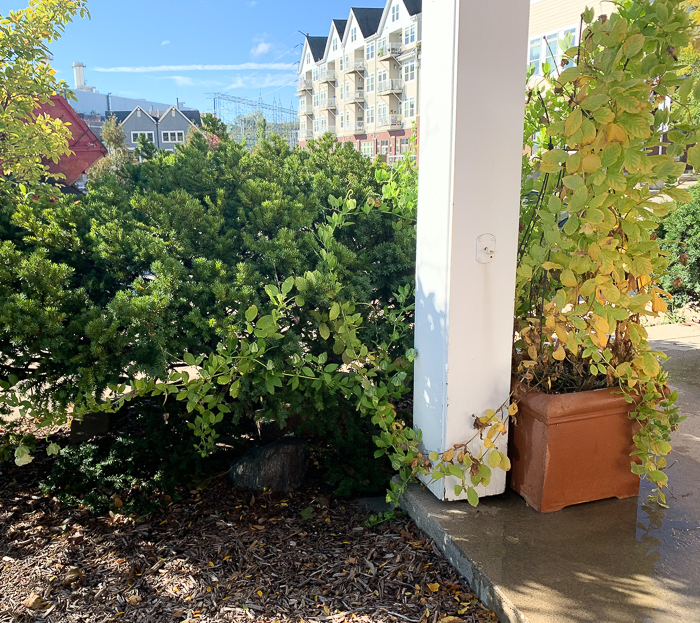 I planted cup and saucer vine in one of the planters at the office. This photo from early October shows its fall color but also how it escaped and formed a garland on the nearby shrub. 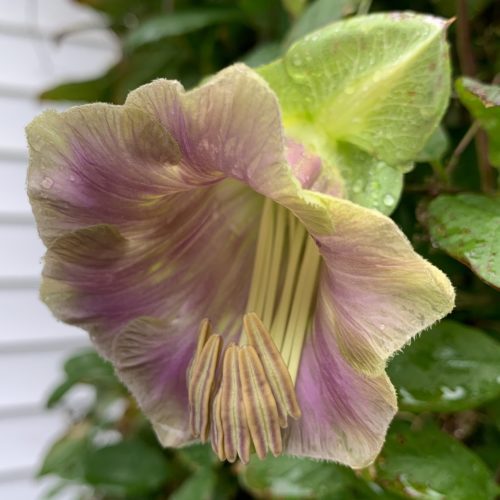 What a delight it was to grow hyacinth bean vine aka Dolichos lablab last year. I didn’t even give it a fair trial because I grew it in the trough by the garage, which gets almost no direct sun but lots of bright indirect light. I can only imagine how great it would have been if it had been in full, hot sun. Even in the conditions I subjected it to, it performed well.

It has beautiful, three-lobed leaves with purple veins (that you only really see up close), so it’s pretty even before it flowers. And its flowers are a lovely pink on deep purple stems with purple calyxes. And when the flowers are gone there are gorgeous dark purple bean pods, that you should probably really cut off to promote flowering, but they are equally beautiful. I like the ‘Ruby Moon’ variety I grew last year, but there are several varieties to experiment with.

I’m pretty sure I’ll grow this one in the deck containers this year. 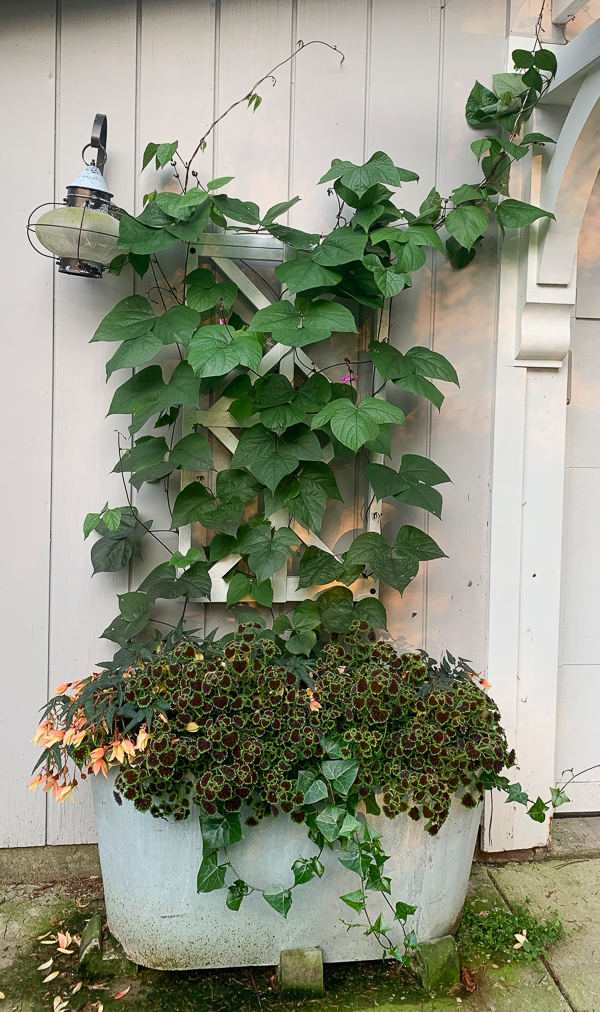 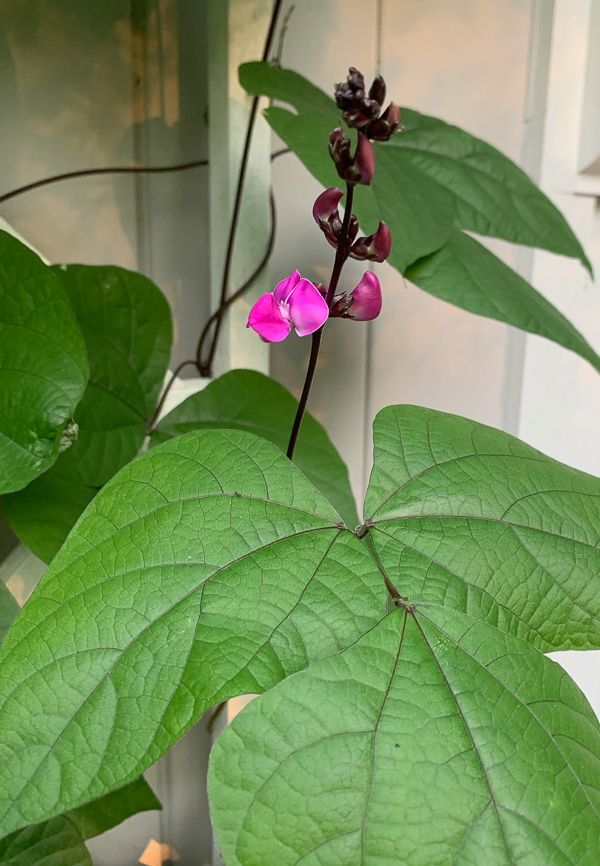 Mandevilla was my gateway vine. I mean, how can you resist those gorgeous flowers that make you feel like you’re in Hawaii with their tropical look? There’s very little not to love here, except for the price. Last year I was desperate to grow the apricot-colored variety in the window box. Desperate enough that I bought two for more than $20 each.

It’s just hard to justify that cost when there are so many great vines that you can grow from seed.

Mandevillas can be overwintered in a variety of ways that mostly involve letting them go mostly dormant in the house, but I’ve never tried it. (Blame it on gardening fatigue that hits hard in fall.)

The Mandevilla situation has gotten rather confusing though. There used to be plants known as Mandevilla and plants known as Dipladenia, but now they all fall under the genus Mandevilla. Those formerly known as Dipladenia tend to be a little bushier but vine as well, jut not as tall. I usually prefer the leaves on these, but I like the habit on the “old” Mandevillas more. Honestly it’s very confusing, so I’d say, read the labels and make sure you’re buying a vining variety, as there are some that will not vine at all.

For years I only grew mandevilla in these containers and I think you can see why. 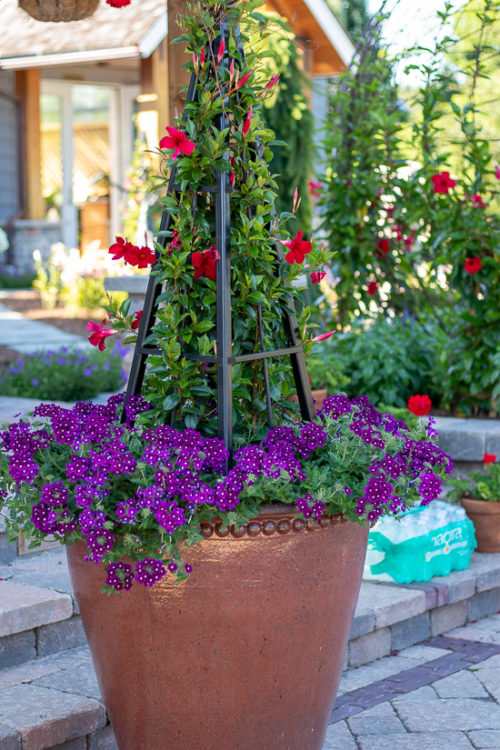 I loved this combination of purple verbena and red mandevilla at a garden I toured a few years ago.

I was first introduced to Malabar spinach (Basella alba) at our master gardener plant sale several years ago. And although it’s not widely known, I should have known that container designer extraordinaire Deborah Silver has been using it for years.

It’s not a true spinach, but it is edible and it’s leaves taste a little bit like a buttery spinach. It’s best to eat the young leaves as the older, thicker leaves require a lot of chewing and reminding yourself that they are delicious. The older leaves are deep, dark green and newer leaves emerge a lighter green. That combo is important, because you grow the one for the foliage, as the flowers are rather insignificant little pink balls.

It has pinkish-red stems that twine around bamboo poles or whatever skinny support you give it to grow up.

I’ve written a lot about sweet peas because they are just so darn pretty. And they win the best-smelling flower every day of the week. However, they aren’t big lovers of heat, so they can poop out in the heat of summer, particularly in hotter zones. That makes this one fall into a bit of a different category than the rest of the vines here, but no list of annual vines would be complete without them. 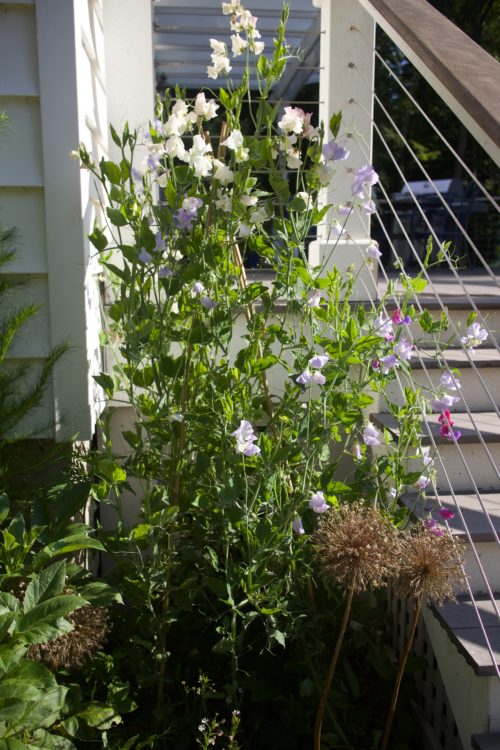 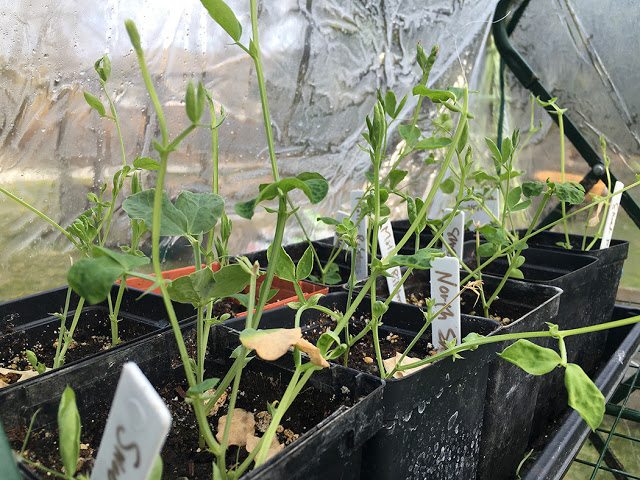 It’s amazing that these lanky seedlings quickly grow to big, gorgeous vines like above. 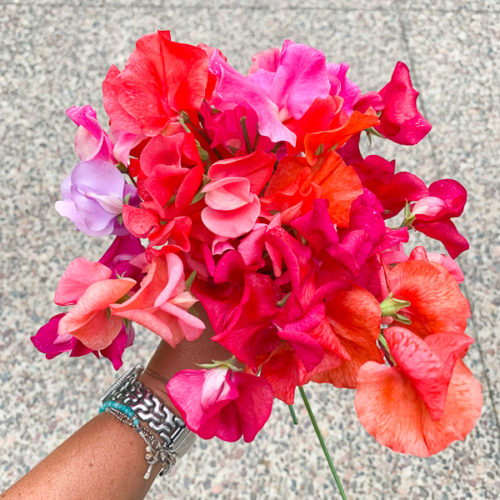 Although I’ve not grown this vine before, I plan to this summer. I’m including it on this list because it will grow in bright shade, which makes it a handy plant to have around. You’ll probably look for this one as a plant, but it apparently overwinters well in the house.

There are no flowers to speak of, but the colorful foliage is doing all the work here. 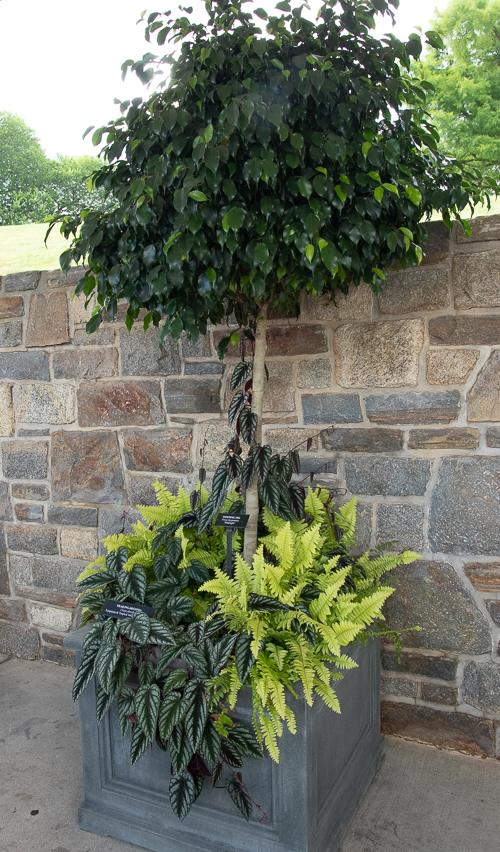 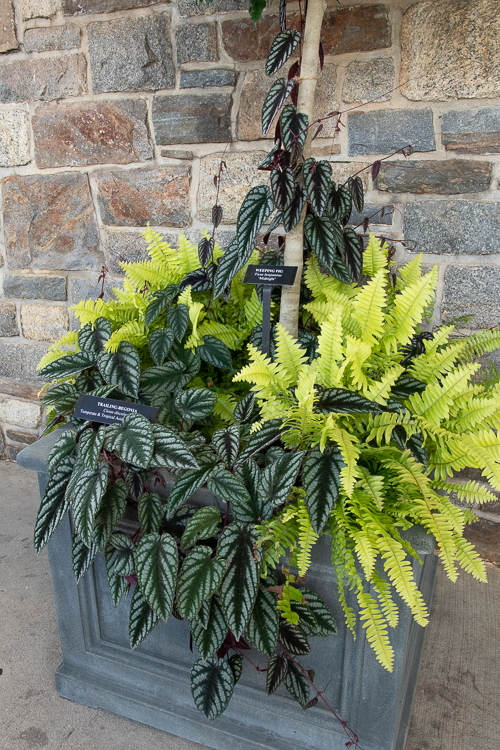 I came across Cissus discolor in the parking lot of Longwood Gardens last summer, where, in mid-June, it was just getting going on its trip upward. That fern is stunning with it, right?

I’ve never grown morning glory because, frankly, I’m a little afraid of it. It is known to be an aggressive reseeder. It also grows aggressively, which can be a great quality. I’ve seen it covering the base of windmills on farms and it’s a lovely cottage accent. And let’s be honest: The flowers are amazing. Large open flowers come in a wide range of colors including perhaps one of the truest blues you’ll find in a flower.

It’s easy to grow from seed, and in fact, I’m not sure I’ve ever seen it sold as a plant. Keep up on the deadheading to keep reseeding at bay.

These two varieties were new introductions from Thompson and Morgan that I saw at California Spring Trials in 2018. There’s no denying these are stunners. 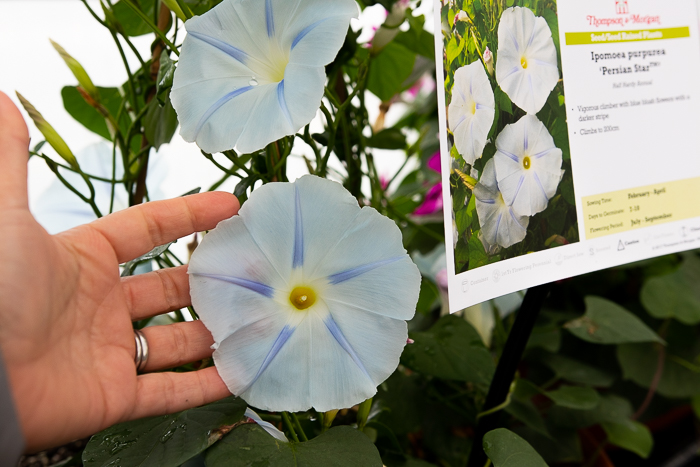 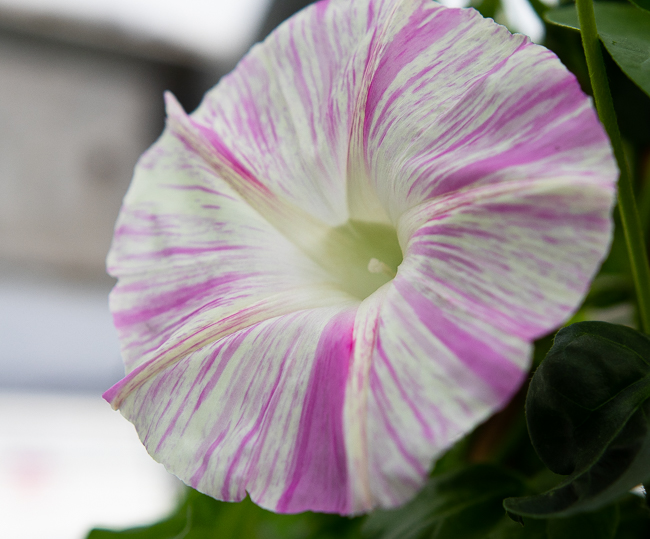 I’ll warn you, once you start growing annual vines, it might be difficult to stop. They are just so handy to have and watching them grow will make you feel like a great gardener.

cup and saucer vine hyacinth bean malabar spinach mandevilla rex begonia vine sweet peas vines
by Erin @ The Impatient Gardener
15 Comments
previous post: The hardest part of gardening (for me)
next post: A feast for the eyes and inspiration file at Longwood